C.C. Smith's Sons Engineering Company operated in the Ohio Valley for over one hundred years, surveying a wide variety of properties and landmarks.  This fascinating collection includes plat drawings, surveys, correspondence, land deeds, and other types of material.  Filling up 6 file cabinets and 10 additional boxes, the collection is rich with information useful to architectural historians, historic preservationists, engineers, and local historians. In the current era of computer-aided design, the drawings stand out even more for their attention to detail and freehand mastery.  Access the inventory here, and read on for more information about the collection. 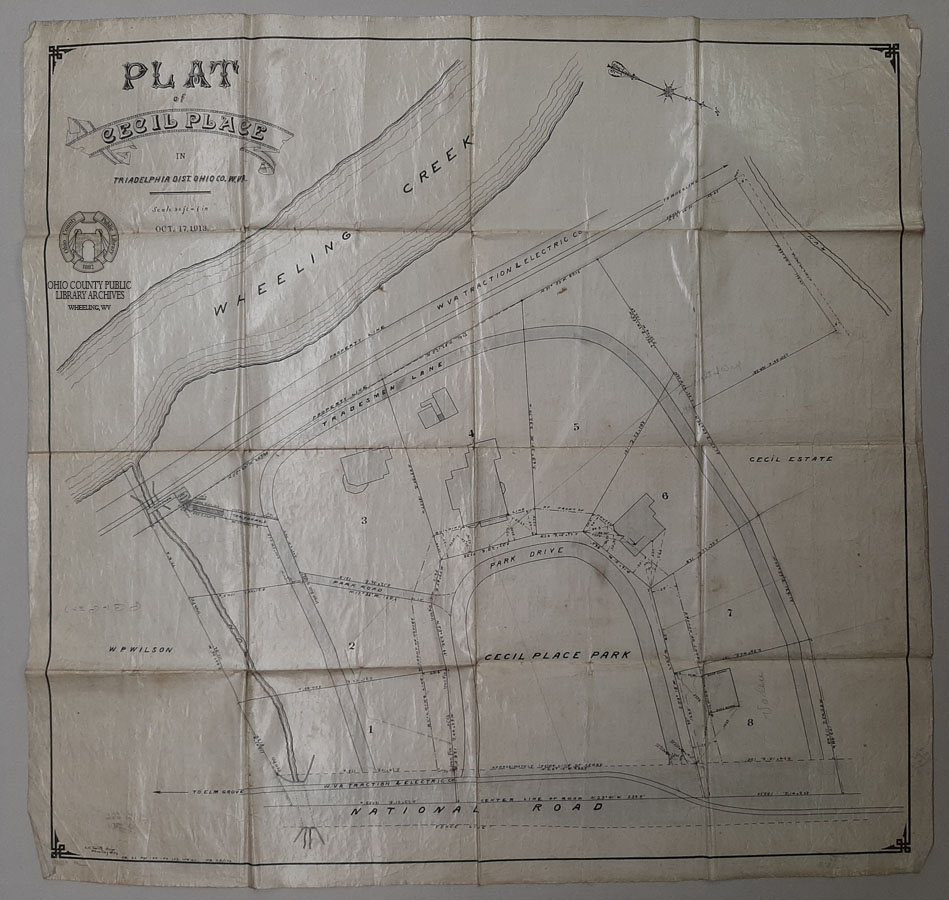 The firm can trace its history in the region to the family patriarch, Walter C. Smith, who arrived in Wheeling from Washington, DC in 1852 to work on the B & O Railroad as an engineer. Along with F.L. Hoge, Smith is credited with designing and building the Main Street Stone Bridge in downtown Wheeling. His son, Clement Carroll Smith, was born in 1858 in Lynchburg, VA, and later joined his father, who had returned to Wheeling. C.C. Smith learned the engineering trade from his father and they worked together until his father's death in 1897. Many early plat drawings and maps in the collection depict the insignia, W.C. Smith & Son. 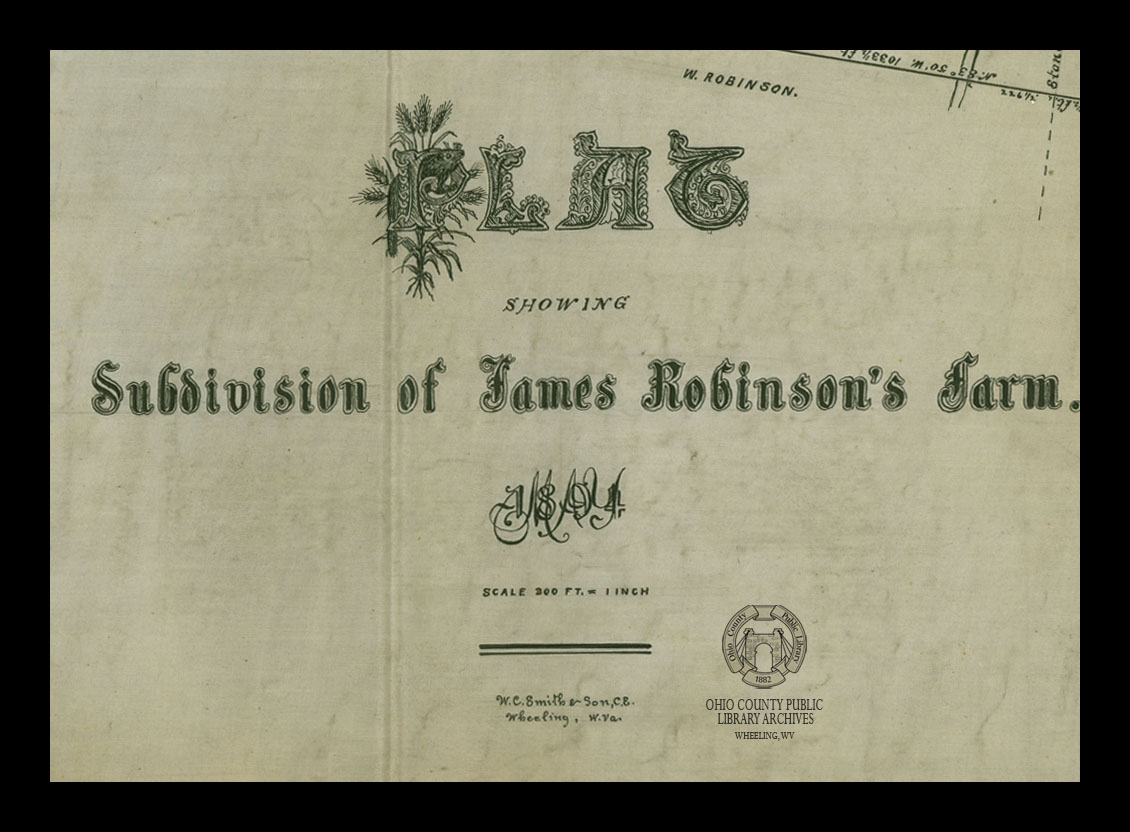 After his father’s death, C.C. Smith continued his engineering endeavors. According to his obituary, he was involved in building the Wheeling Traction Company line from Benwood to Moundsville and also the LaBelle Iron Works in Steubenville, Ohio. He married Lizzie Morrow in 1886 and together they had 4 sons and 3 daughters. Several of his sons followed in his footsteps to form C.C. Smith's & Sons Engineering Company. When C.C. Smith passed away in 1924, the second oldest son, Sydney C. Smith, became the main proprietor of the firm, and altered the name to C.C. Smith's Sons Engineering Company. 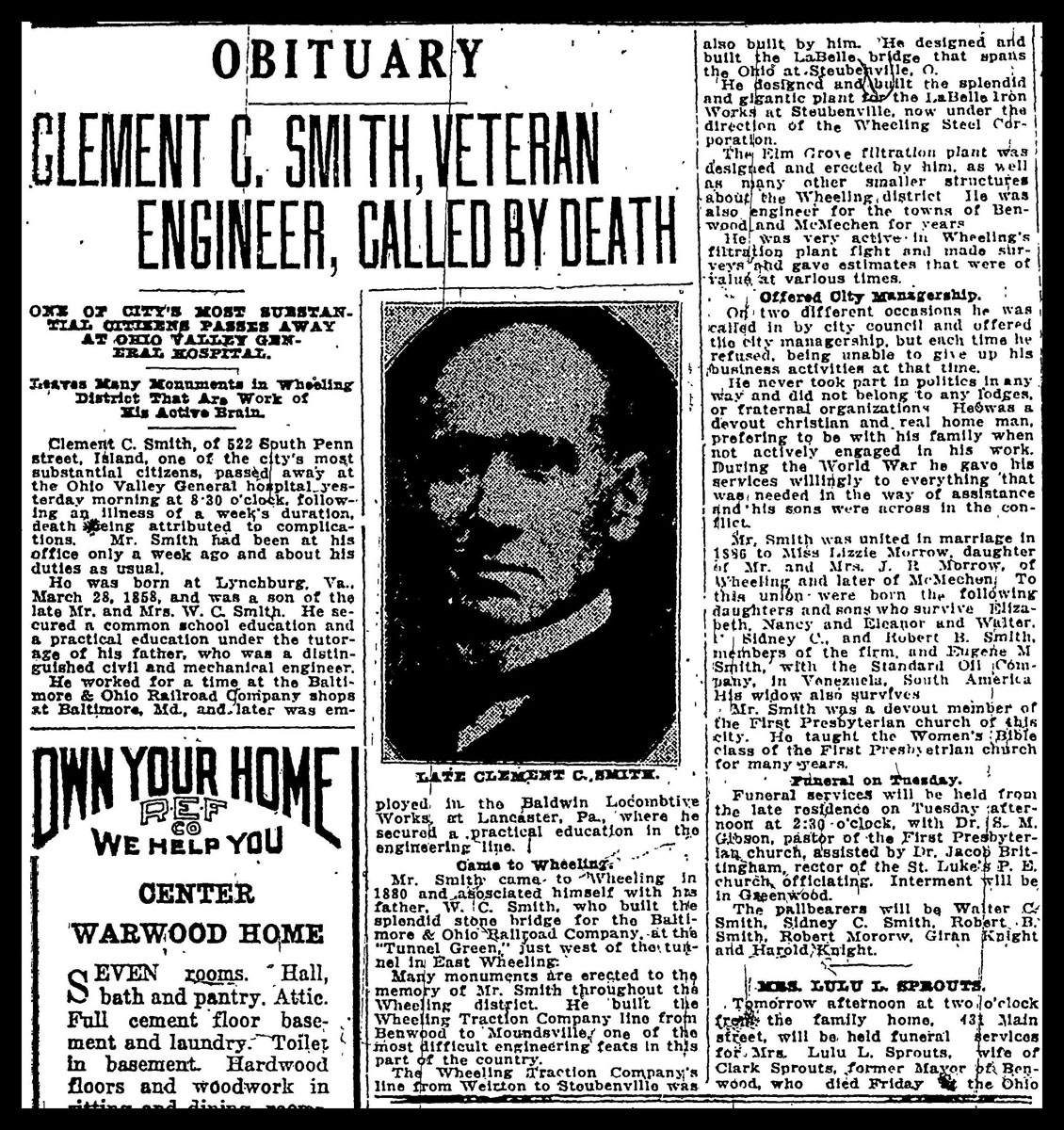 Throughout the company’s tenure, which lasted well into the 1970s, the engineers consulted on projects in a variety of locales in the Ohio Valley, including McMechen, Wellsburg, Moundsville, and Benwood in West Virginia and Tiltonsville, Steubenville, and Yorkville in Ohio. Drawings and surveys depict properties, neighborhoods, and structures as diverse as the Capitol Theatre, the Moses Shepherd Estate at Monument Place, Wheeling Steel Corporation, Hitchman Coal & Coke Company, Woodsdale, Boggs Run Cemetery, Elm Grove Milling Company, Ohio Valley General Hospital, and the B. & O. Railroad. 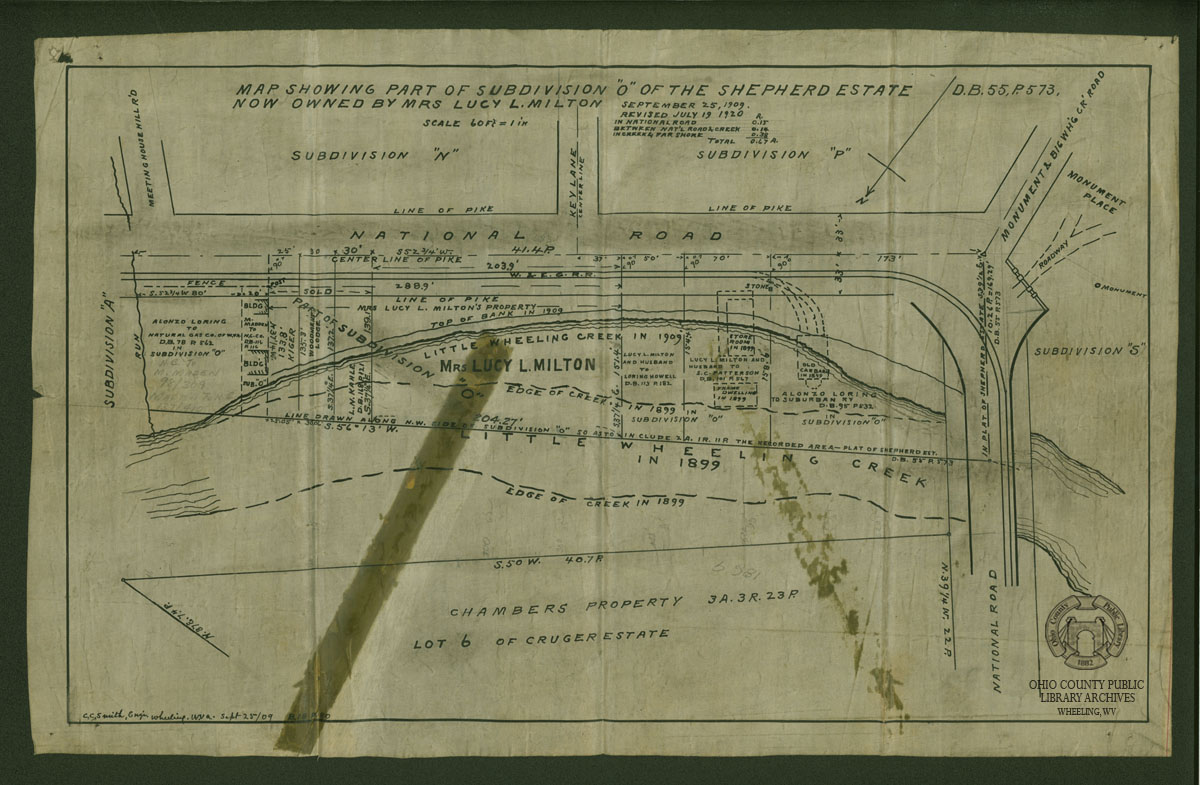 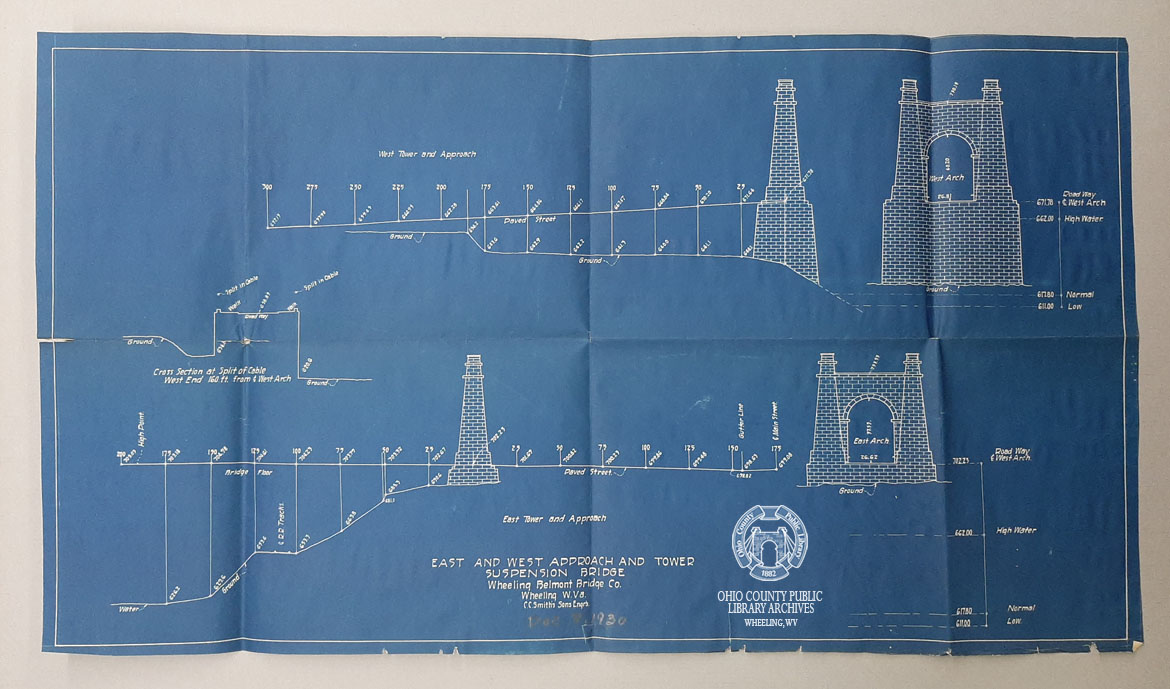 Many folders contain ancillary material in addition to the engineering surveys, such as an advertisement for "61 Home Sites!" in the "new" neighborhood of Edgdale [currently known as the Lenox neighborhood east of National Road across from the El Villa Apartments]. 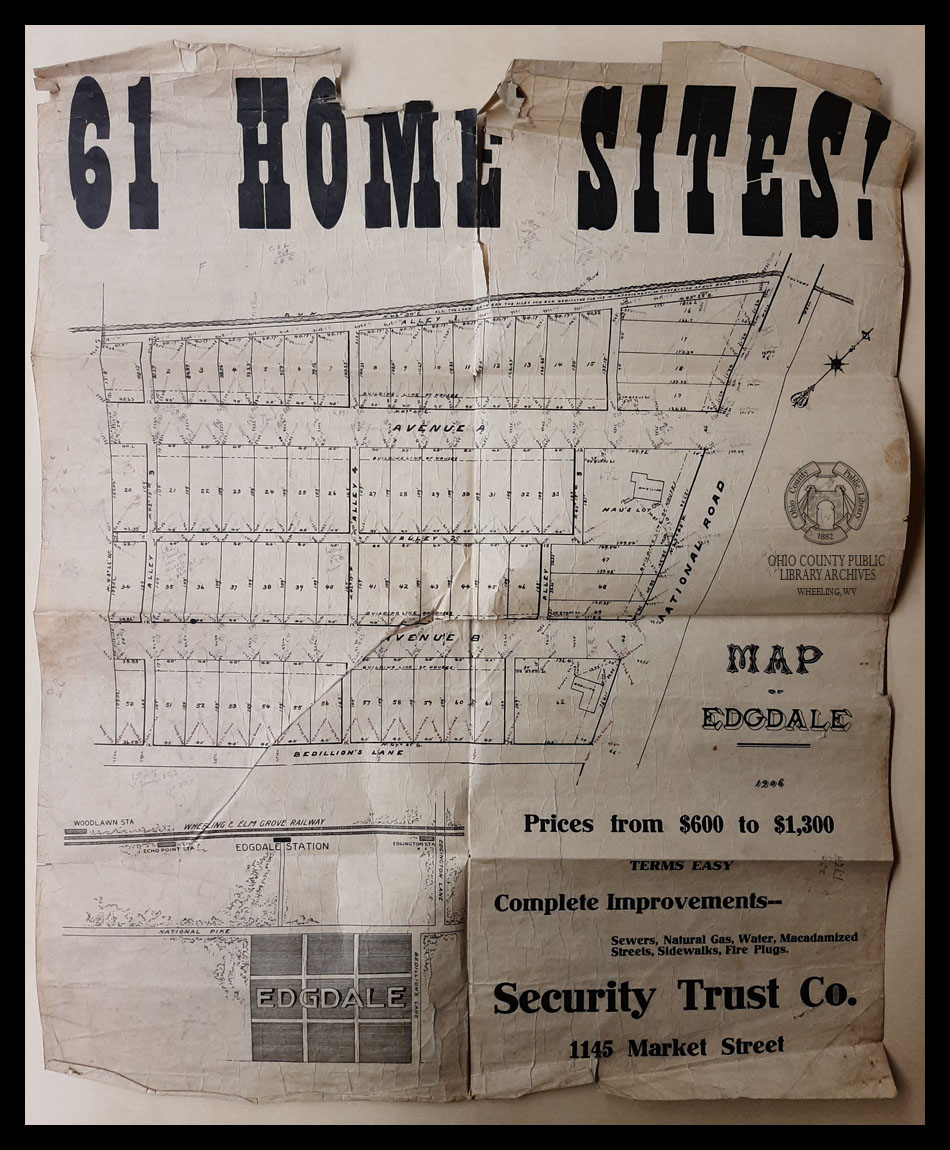 Descendants of the Smith family have said that the files were stored for many years in a pole barn after the engineering firm dissolved in the early 1980s. When the material was transferred to the library, the original order of the files was disrupted. There appears to be one over-arching alphabetical filing system, with a few other file sets interspersed throughout. We chose to keep the files in the order that they arrived and to simply inventory the file names and enter them into an excel document. 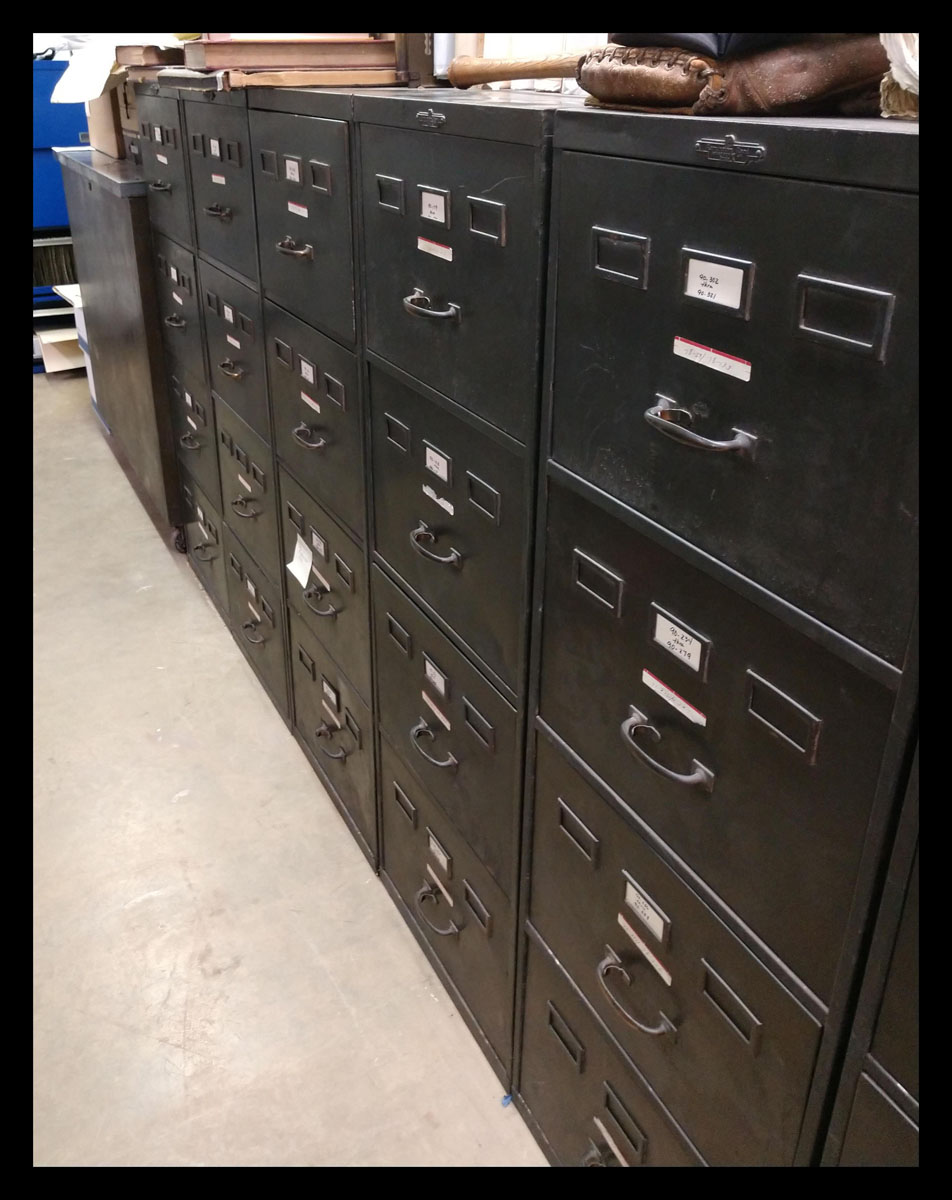 The way that we have approached this archival collection is indicative of how processing can often be a multi-stage, iterative process. In most cases, material is transferred to acid-free folders and boxes to prevent further environmental degradation. In this case, due to staffing and space constraints, we chose to keep them in their original housing, except in cases where the folders were falling apart or drawings were extremely brittle.  In addition, the large plat drawings remain folded instead of being unfolded, flattened and rehoused in large file folders. Now that the collection is open for research, we will decide on future rehousing and preservation issues based on the collection's use and demand. 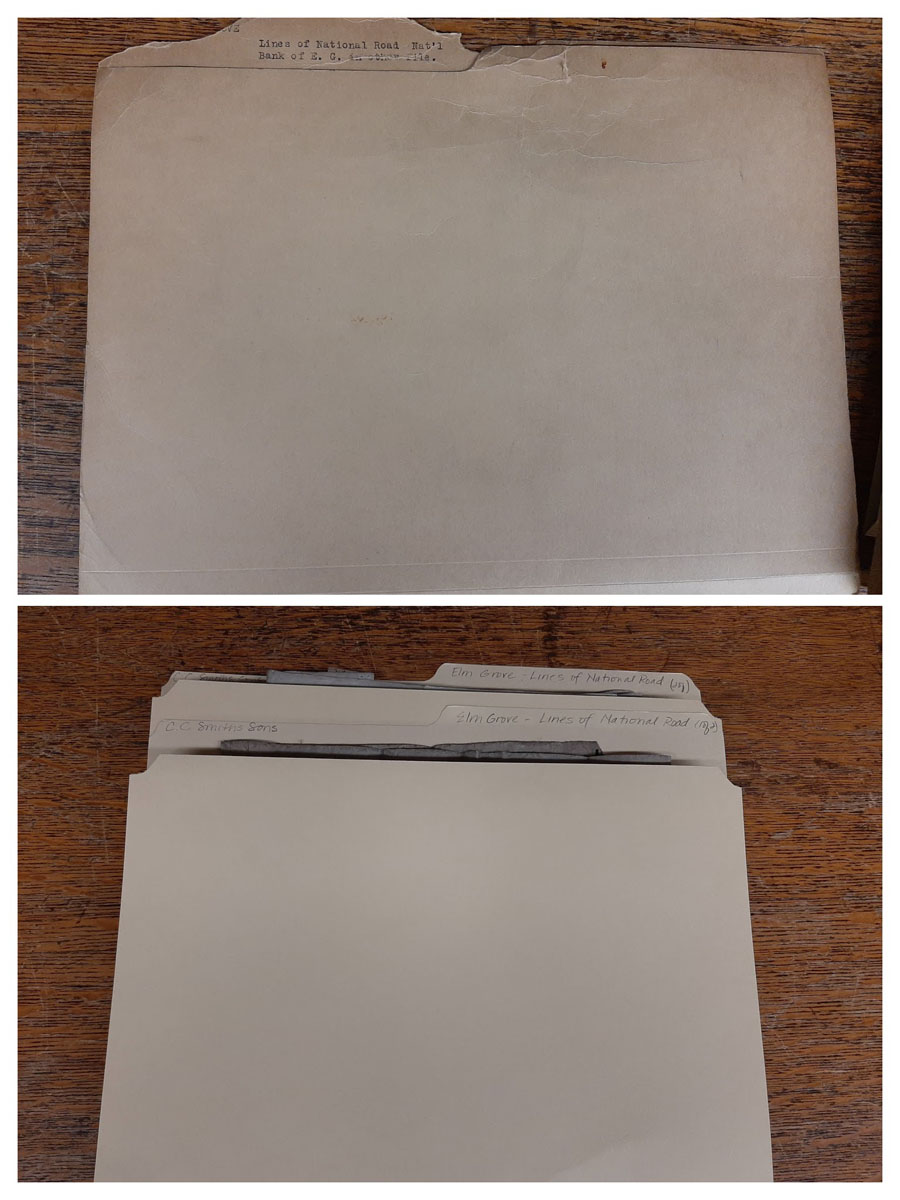 We are pleased to be able to offer the inventory to the public as the collection is sure to be a valuable resource for researchers of all kinds. Please contact the library by calling 304-232-0244 or using the Ask an Archivist form if you are interested in viewing this collection.

A special note of thanks to Elizabeth James, former OCPL Archives volunteer and current Archivist and Digital Preservation Librarian at Marshall University, for starting the C.C. Smiths Sons inventory.