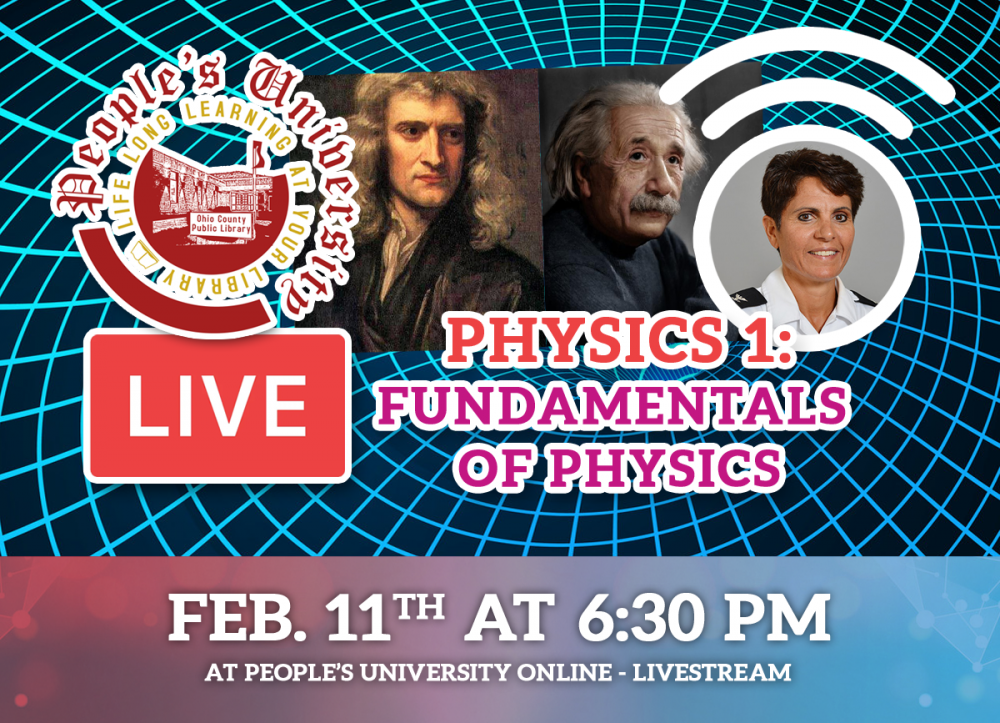 Abstract: Fundamentals of Physics. Force, pressure, momentum, energy are words used by many but to a physicist, they are more than mere words. They merge together with mathematics and laws creating a path to describes matter, motion, and our universe. Join me in an ambitious journey through the fundamentals of physics, beginning with classical mechanics, Newton’s Laws and ending with a glimpse into Albert Einstein’s Special Theory of Relativity (if space and time permit!).

This program will be available to watch live on Facebook Live, on YouTube, and on the OCPL website's People's U Livestream page.  Log into your Facebook or YouTube account during the program to leave a question for Dr. Vargas in the comments box. She will answer them during the live broadcast. Make a comment, or ask a question, and you will be entered in a drawing at the end of the livestream to win a Famous Scientist Tumbler of Marie Curie from Uncommon Goods.

INSTRUCTOR BIO: Stacey Kefalos Vargas is a professor at the Virginia Military Institute (VMI) in Lexington, Virginia. She received her B.S in physics from Wheeling College in 1988 and continued her education, earning a Masters and Ph.D. in physics from the University of Connecticut. She joined the faculty in the Department of Physics and Astronomy at VMI in 1996. She was the first woman in science and engineering at VMI to receive tenure and promotion to full professor. She is the recipient of a VMI Distinguish Teaching Award and the Thomas Jefferson Teaching Award. In addition to teaching a variety of physics courses, she performs research in laser spectroscopy, free space optics and visible light communication. She has published many articles and received several grants to fund her research. She has collaborated with companies pursuing novel wireless communication technologies. In 2017, she won the Innovation in Higher Education award from the Shenandoah Valley Technology Council for her novel research using ultra-short-pulse lasers in free space optics communication. She is passionate about her teaching and her research. She resides in Lexington, Virginia with her husband and their five children.

ABOUT THIS PEOPLE'S UNIVERSITY SERIES: "Physical Science, The Joy of Discovery"

The Ohio County Public Library in Wheeling will offer the 31st entry in its People's University series as a 6-class online, livestream presentation. "Physical Science, The Joy of Discovery" will take attendees on a journey through the philosophical and intellectual development of science as a method of accurately weighing evidence, eliminating bias, finding facts, and acquiring knowledge.

Later classes in the series will explore the history and fundamental building blocks of the pillars of physical science: chemistry and physics. Attendees will learn about what matter and energy are and what laws they obey. Additional classes will explore specific applications of chemistry, namely laser technology as well as combating multi-drug resistant bacteria through drug discovery.

In 1951, the Ohio County Public Library's librarian, Virginia Ebeling, referenced British historian Thomas Carlyle, who said, “the public library is a People’s University,” when she initiated a new adult education program with that name. Miss Ebeling charged the library with the responsibility of reaching “as many people in the community as possible.” In keeping with that tradition of public libraries as sanctuaries of free learning for all people, the Ohio County Public Library revived the series in 2010. The People’s University features courses (taught by experts in each subject) that enable patrons to pursue their goal of lifelong learning in classic subjects such as history, music appreciation, philosophy, and literature. Patrons may attend as many classes as they wish. There are no tests of other requirements and all programs are free and open to the public.