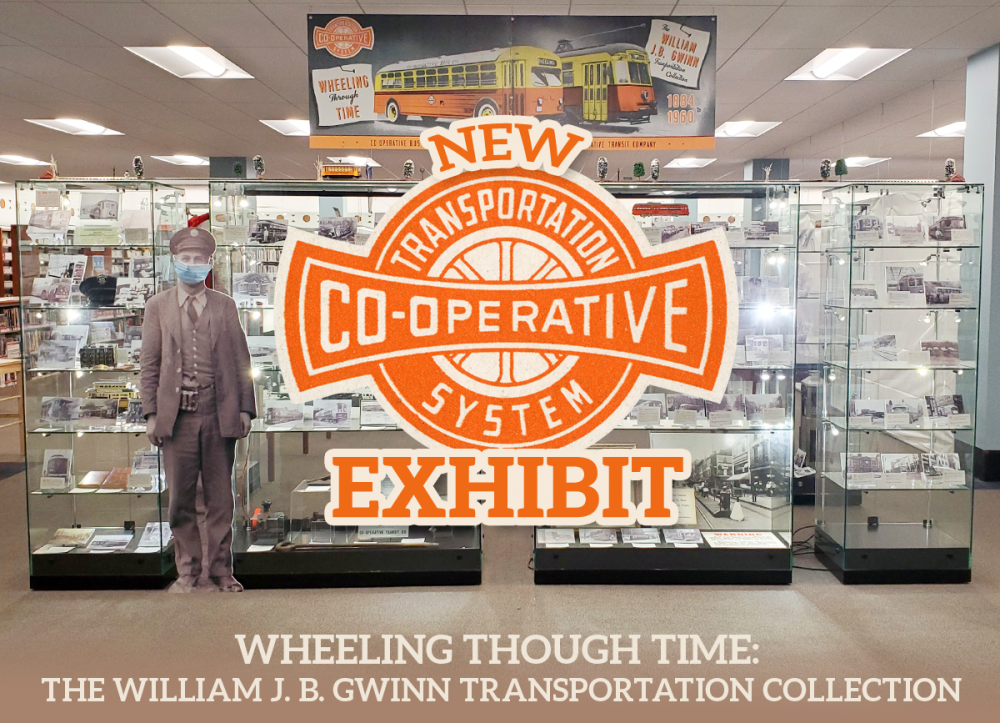 Wheeling Though Time: The William J. B. Gwinn Transportation Collection, 1884-1960

Known from its early days as a transportation hub, by 1866, Wheeling was the second Ohio Valley town (after Bellaire) to have street cars on rails pulled by horses for public transportation. By 1887, those tired horses were replaced by an electric street railway or “trolley” system – the word “trolley” actually referring to the pole that runs along the electrical wire above the “street car” itself. This development made Wheeling only the third city in the United States, following just Baltimore, MD (1885) and Richmond, VA (1886) to have electric trolleys.

The city’s trolley/street car era would last 60 years, ending in 1948 when the last of the rail-cars were retired and replaced by buses.

William J. B. Gwinn was a street car conductor, a bus driver, and an avid, self-described “Railfan,” who, beginning in 1918, painstakingly documented that era with the passion of a collector, “swapping” for film and prints or personally taking, on his trusty box camera, thousands of photographs of street cars, trains, and buses operating in the Wheeling area. Now, you can see a small fraction of his massive collection in a new exhibit at the Ohio County Public Library, which features images from the Gwinn transportation collection in the Library’s archive as well as street car artifacts on loan from the Pennsylvania Trolley Museum in Washington, PA. 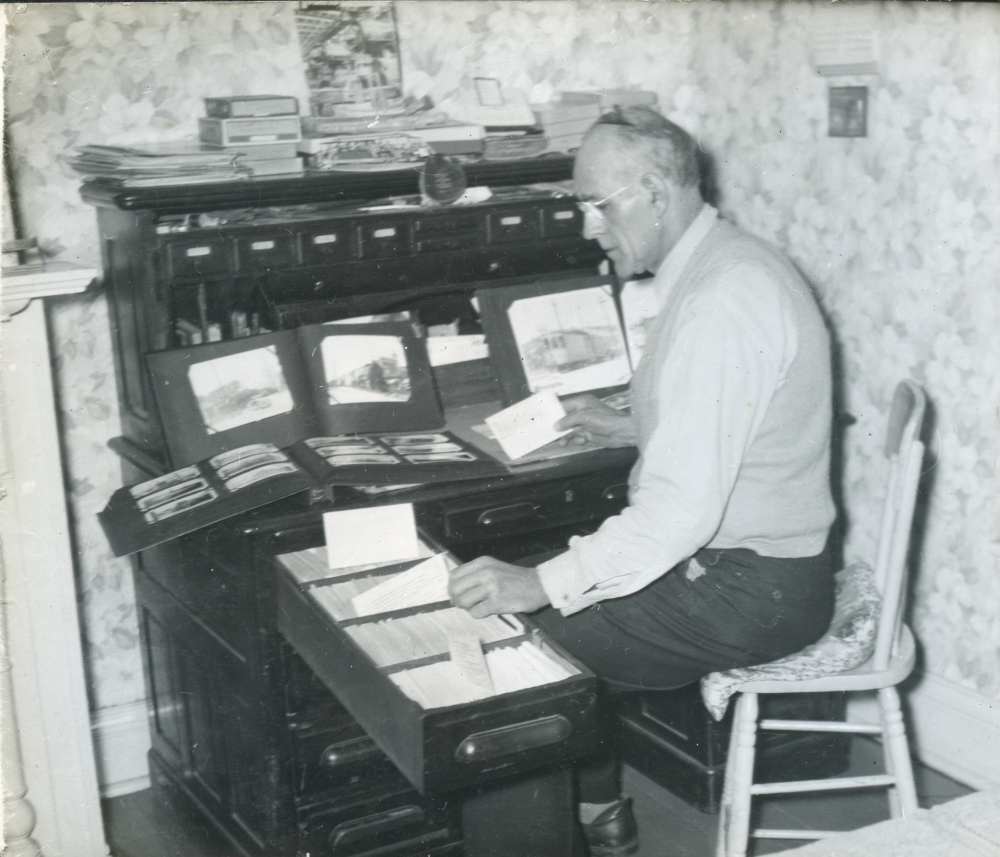 Mr. Gwinn stored thousands of negatives in the drawers of his old roll top desk, as well as thousands of prints in numerous albums in his home on Main Street in Bridgeport, Ohio. According to a 1951 newspaper article, Gwinn had accumulated an incredible 35,000 plus transportation photographs at that point. He lived, and continued collecting, until 1976.

Born in the Summers County town of Meadow Creek, WV, Gwinn began operating street cars in Huntington. He came to Wheeling in 1920 to work for the B.&O. Railroad, but transitioned to street cars that same year. Gwinn worked for the Wheeling Transit Company, then its successor, the Co-Operative Transit Company on the Martins Ferry line along with the well-traveled Wheeling-Warwood-Steubenville line right up until the last day of operation on November 23, 1947. Gwinn himself then made the switch to bus driver, retiring in 1962. 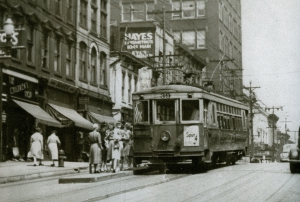 Though he died before the project was complete, Mr. Gwinn lived long enough to be thrilled by the news that one of Wheeling’s cars on which he personally served, old #39 (seen at left on Main Street in 1945), was to be restored by the Seashore Trolley Museum in Kennebunkport, Maine. Mr. Gwinn’s photos proved essential to the restoration. Now sporting its original number 639, the Cincinnati-made curved-side street car built in 1924, the only Wheeling street car known to still exist, has been painstakingly restored over many years to working condition. The editors of a book about the car and its restoration will do a livestream presentation for the Library on Thursday, Jan. 7 at 6:30 pm. See below for details. 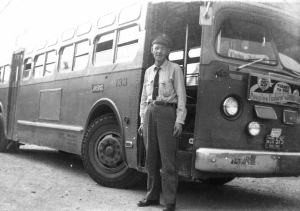 There are, of course, still Wheelingites alive who can recall, with various degrees of nostalgia, hopping on trolleys at the main station and waiting room on 10th Street where the Bridge Restaurant is now, and riding the cars up and down Main and Market streets, sometimes venturing through Warwood as far north as Steubenville or through Benwood as far south as Moundsville or west over Ohio River on the steel bridge to many destinations in Ohio. At the electric railway’s peak, more than 100 street cars operated throughout the Upper Ohio Valley, connecting a population of about 200,000 people. By 1948, all of the cars were gone, replaced by gas-powered vehicles in a process known as “bus-ification.” 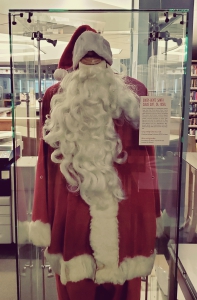 As a holiday treat, one of the highlights of the exhibit is the Christmas collection of trolley photos and one prominent artifact that every Wheelingite of a certain age remembers: the red suit worn by the “Real Santa Claus” who, of course, operated “Toyland” at the Cooey-Bentz Company store in South Wheeling, a popular stop on the old trolley circuit.

Other highlights of the exhibit include nearly 100 amazing photographs with captions written by Bill Gwinn himself that recount the history of trolleys and buses in Wheeling in amazing detail, a life-size standee of Bill Gwinn (take a no-contact selfie with him to be eligible for prizes), vintage trolley and bus parts, tokens, hats, and a surprise that you’ll just have to see in person.

The exhibit will run through the 2021 Summer Reading Program, with must-see additions along the way. Contact the Library at 304-232-0244 to make an appointment to see the exhibit. The new operating hours are Monday through Thursday, 10 am – 6 pm; Friday, 10 am – 5 pm; and Saturday, 10 am – 3 pm. Visit the Library’s website at www.ohiocountylibrary.org to read all of the instructions for making your appointment. Remember, all patrons must wear a mask while in the Library and practice safe social distancing. Please let staff know you’re there to see the Gwinn exhibit.

- View our online photo gallery of items from the Gwinn exhibit. 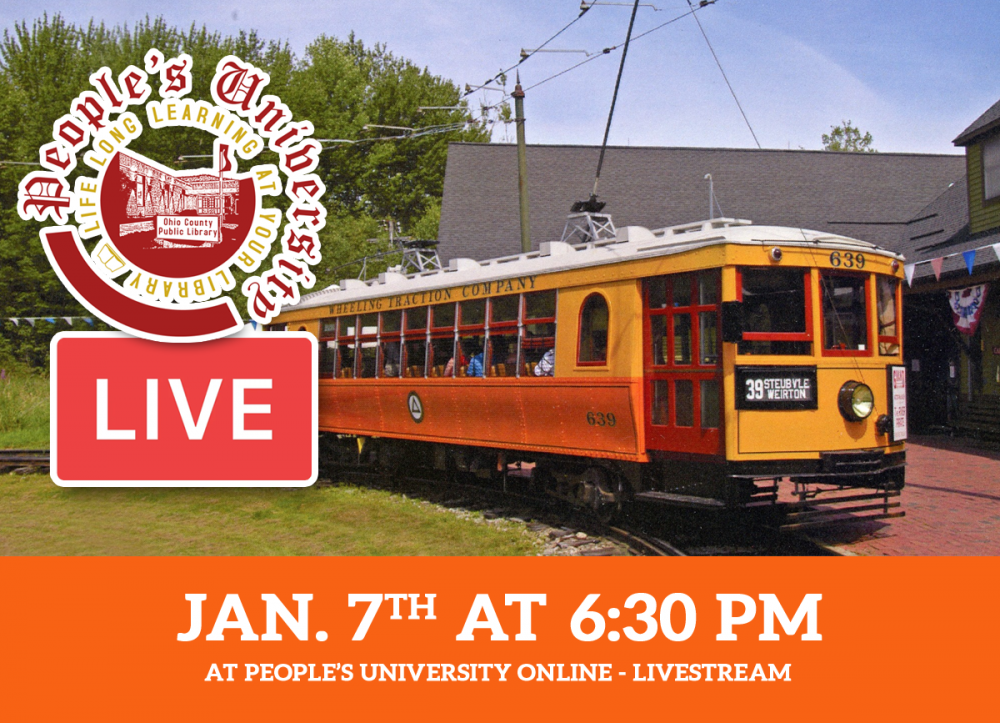 The Seashore Trolley Museum in Kennebunkport Maine is home to a very special car. No. 639 is a Cincinnati curved-side built in 1924 for the Wheeling Traction Company, later Co-Operative Transit Company. It is one of few survivors of hundreds of curved-side cars and is the last known Wheeling trolley in existence. The body was acquired in 1957 and a decadeslong restoration process followed. Now, #639 is fully restored and in operating condition at the museum. James D. Schantz and Frederick J. Maloney, editors of the book on the subject, will tell us about this unique trolley car and the amazing, epic restoration process, including the importance of the photos of Bill Gwinn, whose work is now on exhibit (see above) at the Ohio County Public Library.