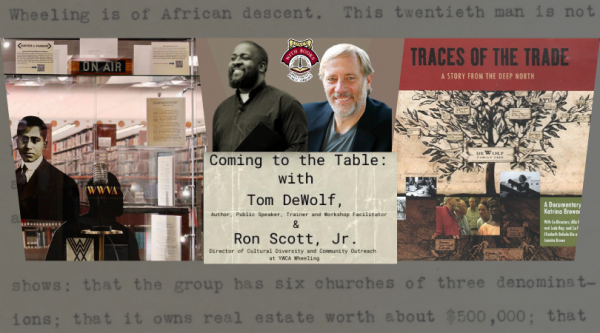 On Tuesday, September 27th, the Ohio County Public Library will host three very important events in one day, all in celebration of the library's new "Civic Empathy Through History" exhibit and project.

The central artifact highlighted by the exhibit is a typewritten speech from the YWCA Collection that was delivered on February 9, 1936, by Harry H. Jones, Wheeling’s only African American attorney at the time. The Ohio County Public Library asked Ron Scott, Director of Cultural Diversity & Community Outreach at YWCA Wheeling, to rewrite Jones’s speech as if he was delivering it today.

At 11:00am on Tuesday, September 27th, the library will host "Civic Empathy Through History: Opening of New Exhibit and Project in Partnership with Heinz History Center." The press conference and exhibit opening will be held inside the library near the main exhibit area.

At Noon, a special Lunch With Books program titled "Civic Empathy Through History: Coming to the Table with Tom DeWolf & Ron Scott" will be held in the library auditorium. At Lunch With Books, Tom and Ron will come to the table to discuss Civic Empathy, the state of race relations in Wheeling and nationally, and how to create a more connected and truthful community and world from the starting point of Harry Jones's 1936 20th Man speech, the Library's featured exhibit artifact. Attendees are welcome to join the discussion.

At 6:00 pm, a film screening of the documentary "Traces of Trade" will be held in the library auditorium followed by a Q&A with Tom DeWolf. In the film, DeWolf and relatives confront their family's legacy as the largest slave-trading dynasty in U.S. history.

The Ohio County Public Library hopes that this exhibit and future related educational programs will set the right tone for discussion, education, healing, civility, and community.