Italian Music and Dance Come to Lunch with Books 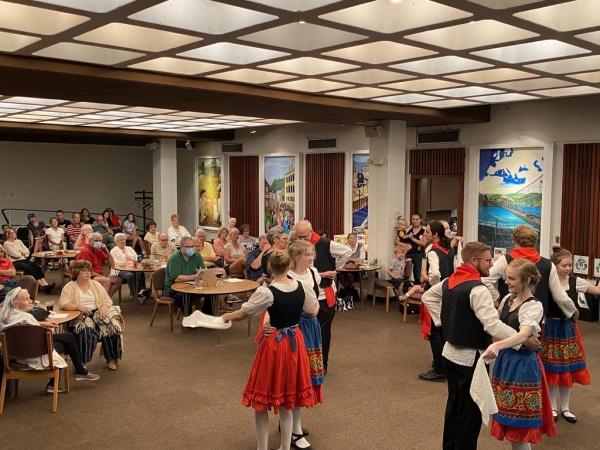 Faire May and the Ohio Valley International Dancers recently brought a little piece of Italian culture to Lunch with Books. The cultural celebration was part of the Italian tradition of marking the traditional feast day of San Rocco. Attendees were treated to music and dance by the performers.

Also known as Saint Roch, the ‘plague saint,’ Rocco was a fourteenth-century pilgrim famed for healing plague victims. Having contracted and survived the dread disease himself, he's usually depicted lifting back his garments to reveal the plague bubo on his thigh and is often accompanied by a dog. Saint Rocco's Feast Day commemorated the end of a severe outbreak of the plague in Venice in 1576. The tradition was brought by Italian immigrants to New York, the Pittsburgh area, and all over the United States. The festival usually includes a procession with a statue of San Rocco, music, food, celebratory dance, and a Mass.

Faire May is a four member band, comprised of Zac Gordon, Jariel Henthorn, Max McGovern, and Jacob Coughlan. The band collaborates to bring old-world music to the modern world. At a Faire May concert you will hear anything from banjos to bagpipes, jaw harps and beyond. you will hear and enjoy music from the 15th century all the way until the 1950s and 1960s. The band loves to play music in the genres of Bluegrass, Celtic, Old-time, Colonial, Gospel, German, Hungarian, Russian, Polish, Mediterranean, Medieval, and classic 1950s and 1960s music.

If we only imagine dystopia, then that's the future we will create. As the daily impacts of climate change become more evident, from historic storms to deadly heatwaves, we need imaginative responses from not only scientists but storytellers, as well. Storytelling is an important tool for imagining better futures when it comes to understanding and adapting to the warming planet. The genre of solarpunk imagines new futures in the shadow of and in opposition to environmental collapse, then works to create those futures. For those unfamiliar with solarpunk, Phoebe Wagner will define the genre, briefly review the history of solarpunk, provide examples, and explore how individuals can use solarpunk thinking and action to engage with environmental issues.

Phoebe Wagner is an author, editor, and academic, writing and living at the intersection of speculative fiction and ecology. Wagner’s debut novel A Shot of Gin is forthcoming from Parliament House Press (2023), and her novella We Survive When We Hold Each Other Up is forthcoming from Android Press (2023). She is the editor of three solarpunk anthologies, including Almanac for the Anthropocene: A Compendium of Solarpunk Futures (West Virginia University Press). Wagner currently pursues a PhD, studying ecocriticism and speculative fiction at University of Nevada, Reno. She is an Assistant Professor of Creative Writing at Lycoming College in Pennsylvania. Follow her at phoebe-wagner.com or on Twitter: @pheebs_w.