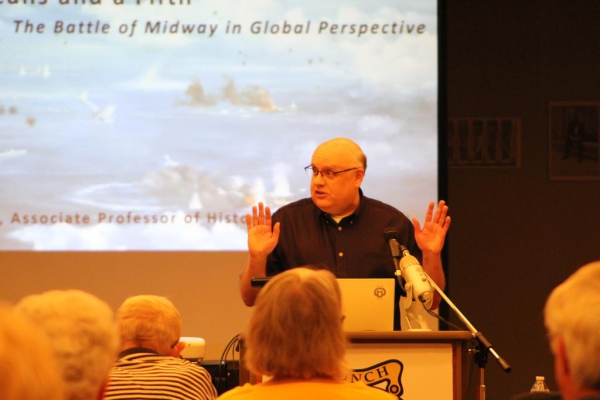 June 4th marked the anniversary of the Battle of Midway. However, the last major casualty and significant event of the battle happened when the U.S.S. Yorktown capsized on June 7, 1942. Eighty years later, almost to the exact hour, Professor John Brobst, recalled the details of the battle and sometimes overlooked significance of the outcome of the Battle of Midway. Brobst utilized maps to illustrate the positions of the Japanese forces in relation to world geography prior to the battle, giving the Lunch with Books audience a sense of Japan's motives in global perspective. This included Japanese deigns on seizing oil in the Netherlands. As Brobst pointed out, the Japanese oil reserves were significantly impacted by the battle and hindered their future motivations. Japanese and American military strategy that would lead into the battle, details, and casualties were also discussed. Brobst pointed out the impact that Midway would have, over a long period of time and combined with other battles, to turn the war effort.

John Brobst is an associate professor of history at Ohio University, where he teaches courses on the British Empire, geopolitics, and naval history. He is broadly interested in contemporary issues of defense and foreign policy as well as historical problems of European imperialism. His research focuses on great power politics in Asia and the Middle East; sea power in the 20th and 21st centuries; and the alliance between Britain and the United States. He is currently working on a book about maritime strategy in the Indian Ocean during the Cold War. 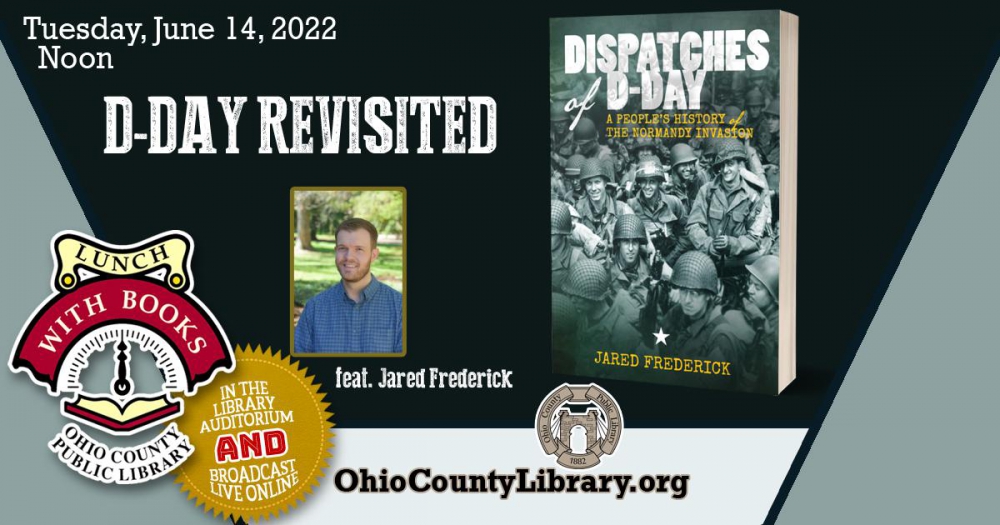 Historian Jared Frederick will discuss his book, Dispatches of D-Day: A People’s History of the Normandy Invasion. Using 1944 newspaper accounts and letters as its foundation, Frederick’s book takes a fresh look at the events and emotions of the invasion, providing moving portraits of the soldiers and civilians who experienced what General Dwight D. Eisenhower called “the great crusade.” Jared Frederick is the author of numerous books, including Hang Tough and Fierce Valor. He has appeared on PBS, C-SPAN, and Turner Classic Movies. A former park ranger at Gettysburg, Frederick is the host of Reel History on YouTube and currently serves as an Instructor of History at Penn State Altoona. Visit jaredfrederick.com to learn more. 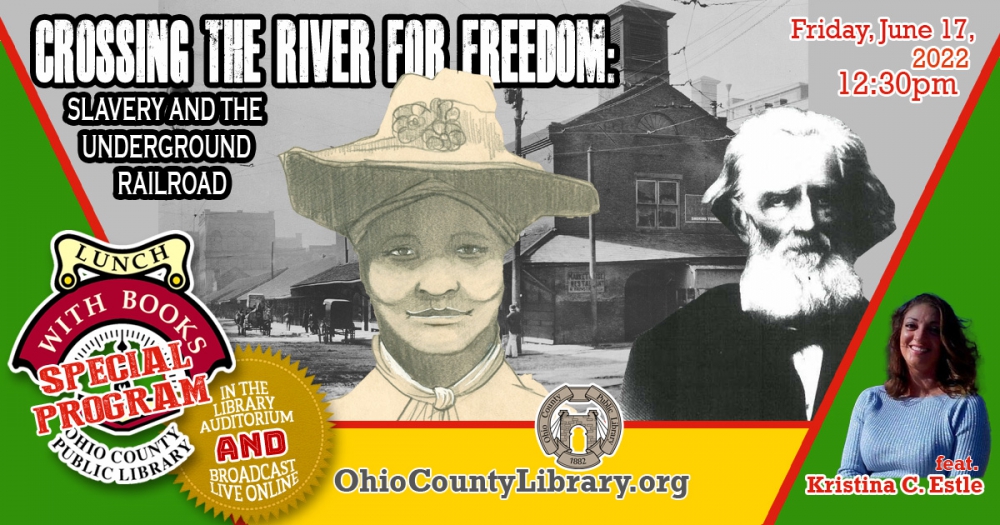 This special Friday program, “Crossing the River for Freedom: Slavery and the Underground Railroad,” will serve as the  launch of the City of Wheeling’s 2022 Juneteenth Celebration. Kristina C. Estle, public historian and Director and Curator of the Underground Railroad Museum in Flushing, Ohio, will present her research on the Underground Railroad and abolitionist movement in Belmont County as well as slavery in Wheeling. Belmont County had roughly 200 miles of underground trails and Estle's research revealed astounding stories of runaway slaves, slave catchers, abolitionists, conductors, and agents. Estle earned her Master’s Degree in Public History/Museum Studies from Southern New Hampshire University and her Bachelor’s Degree in History at Ohio University. She also serves as Education Chairwoman for the Belmont County NAACP and President of the History Detectives of Belmont County. Wheeling’s three-day Juneteenth Celebration will also feature two performances at the Wheeling YWCA on Saturday, June 18th and a memorial service on Sunday the 19th at the slave auction block on 10th street. The celebration will conclude at Wheeling’s Heritage Port. Partners include: Underground Railroad Museum Wheeling Heritage; City of Wheeling; Wheeling YWCA; OCPL; Oglebay Institute; Wheeling NAACP; WV NAACP; and WesBanco Arena. 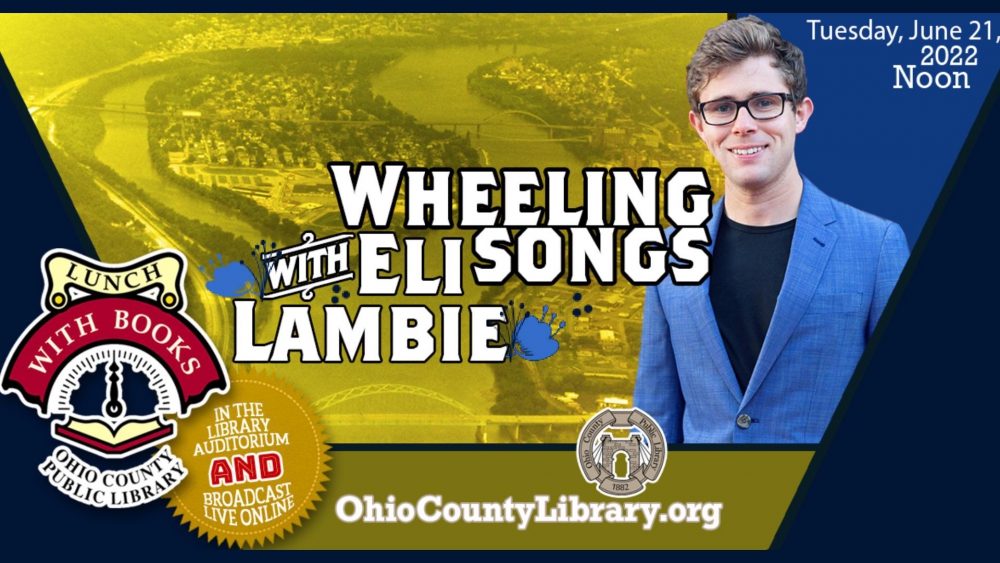 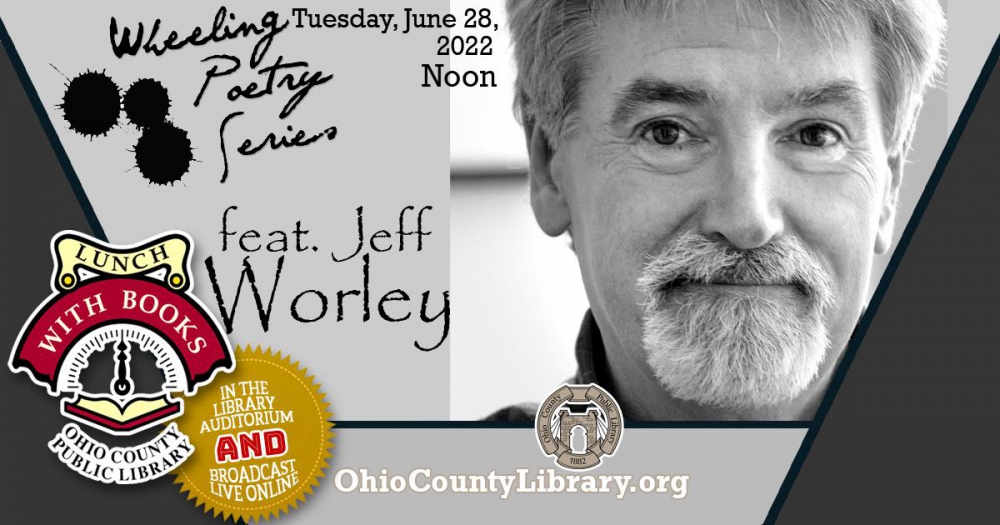 Jeff Worley, Kentucky Poet Laureate 2019-2020, is the author of six book-length collections of poetry: The Only Time There Is (Mid-List Press, 1995), which won Mid-List’s yearly national first-book competition, A Simple Human Motion (Larkspur Press, 2000), Happy Hour at the Two Keys Tavern (Mid-List Press, 2006), Best to Keep Moving (Larkspur Press, 2009). Driving Late to the Party: The Kansas Poems (Woodley Press), and A Little Luck (Texas Review Press). The Poet Laureate of Aurora Avenue: Selected Poems will be published later this year by Broadstone Books. Worley has received 3 Al Smith Fellowships from the Kentucky Arts Council and a National Endowment for the Arts Creative Writing Fellowship. His poems have appeared in over 500 literary magazines and journals. Website: jeff-worley.com. The Wheeling poetry Series is curated and hosted by W.V. Poet Laureate, Marc Harshman. 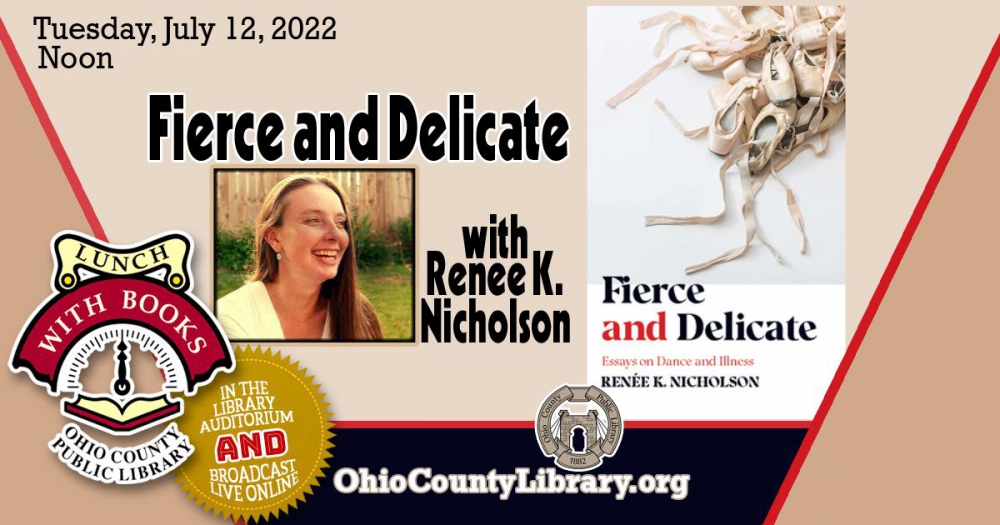 Renée K. Nicholson is the author of Fierce and Delicate: Essays on Dance and Illness, as well as two poetry collections.. An intentionally fractured memoir-in-essays, Fierce and Delicate navigates the traditional geographies of South Florida, northern Michigan, New York City, Milwaukee, West Virginia, and also geographies of the body—long, supple limbs; knee replacements; remembered bodies, and actual. It is a book about the world of professional dance and also about living with chronic disease, about being shattered yet realizing the power to assemble oneself again, in a new way. 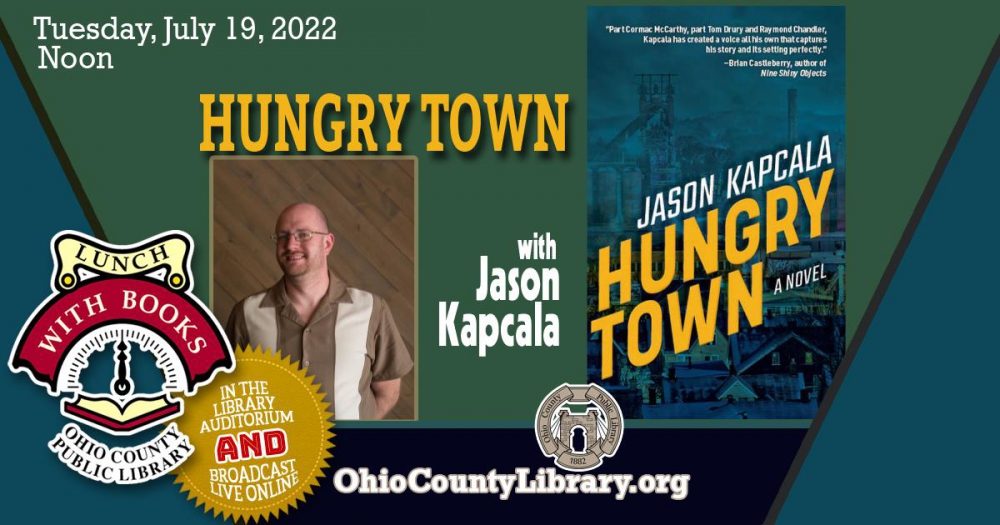 Jason Kapcala grew up in northeastern Pennsylvania, and as a child would often pass the ruins of the defunct Bethlehem Steel Works. The cold blast furnaces lit orange by the security lights and the boundless scar of the Number 2 Machine Shop forged a lasting impression, and ever since, he has worked to recreate those feelings of post-industrial struggle. When he’s not writing and researching, he enjoys reading, cooking, rock and roll, traveling to various hot dog stands to find the perfect “West Virginia slaw dog,” and muscling his Dodge Challenger along the twisting back roads of the Mountain State. He is the author of the novel Hungry Town (West Virginia University Press) and the short story collection North to Lakeville (Urban Farmhouse Press). He is also currently working on his next project, a novel about a small-time rock band from a ghost town in central Pennsylvania. 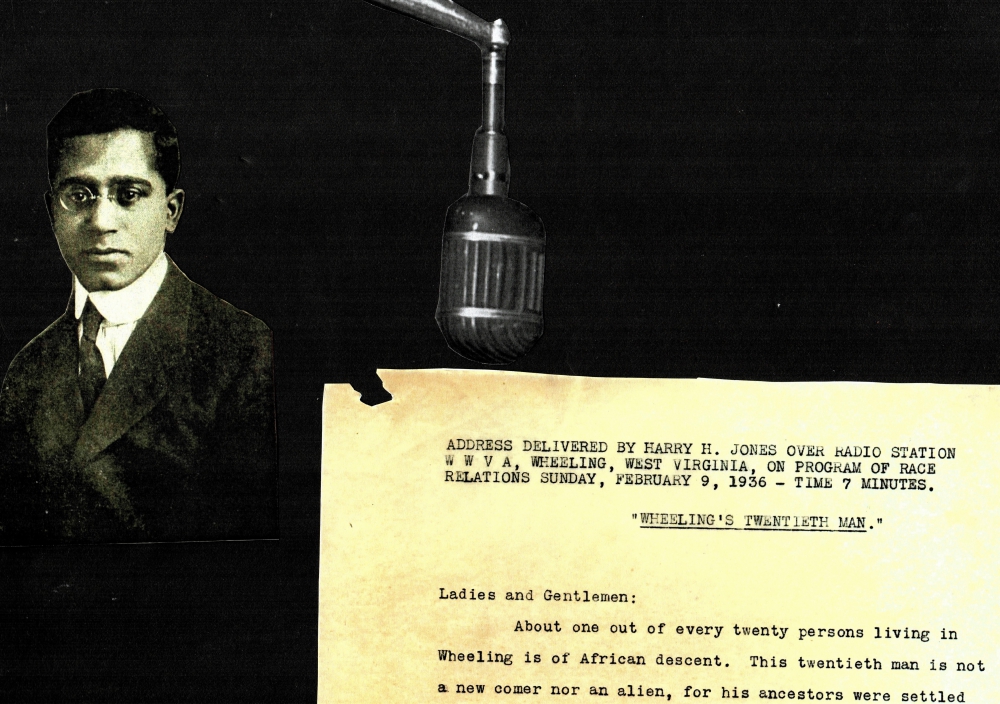 As a member of the Heinz History Center Affiliates (HCAP) program, the Ohio County Public Library has the honor of representing our area by partnering with the Heinz Center for a project entitled, “Civic Empathy Through History.” This project brings together a network of 15 sites throughout our region that create engaging experiences to build empathy and serve as the foundation for civic engagement. A part of the Grable Foundation’s Tomorrow Grants program, the project will highlight stories and artifacts that show how people have taken action to make positive impacts on their communities. Through developing the skill of empathy, visitors will be empowered to see the ways that people have historically been involved in civic action and how they can be involved in the present. Each site will identify a story of civic empathy, and convey that story using an object, artifact, or book. As they explore each story, visitors will be encouraged to take some form of civic action. This program will explore the Library’s project, which will feature an address delivered over WWVA radio on February 9, 1936, by Harry H. Jones, Wheeling’s only practicing African American lawyer at the time. The address was entitled, “Wheeling’s Twentieth Man.” A related exhibit is being installed in the Library'’ main display area. Visit the History Center’s website at www.heinzhistorycenter.org.