John DeFelice, Author of The Clemente Spell, Returns to Wheeling 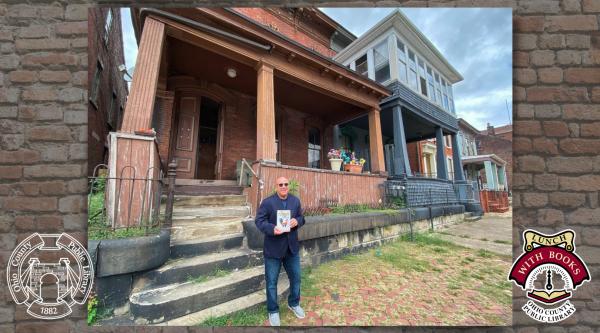 John DeFelice, author of The Clemente Spell, returned to Wheeling, WV for a Lunch with Books presentation at the Ohio County Public Library on Tuesday, September 6, 2022. DeFelice, who was born in Weirton, WV and grew up in Wheeling, WV, now resides in Crowley, Texas. The Clemente Spell is based primarily in the Ohio Valley. Additionally, many characters in the novel are based on family and friends that DeFelice grew up with in the area. Some of these "characters" and other friends reunited with DeFelice at the Lunch with Books presentation.

Feeling the need for a stop at his family's former home, the author revisited his former East Wheeling neighborhood. In addition to many other Wheeling locations, East Wheeling locations from DeFelice's youth are featured in the book. Some of these locations include The Cathedral of St. Joseph, Elks Playground, Clay School, Tunnel Green, and Goosetown.

Book Summary: Everybody loves a good murder mystery, right? Well, unless it happens in your family. Johnny Paul wanted to be a professional baseball player when he grew up, but he was tossed into a world of chaos after he learned his family was living under a curse as a result of a dark, hidden secret. A classic story of the battle between the darkness and the light, The Clemente Spell is a modern-day fairy tale where The Sandlot meets The Shack. Read how a young man emerges from the darkness of a broken home to meet the love of his life.

AUTHOR BIO: John DeFelice was born in Weirton and grew up in Wheeling. He is a graduate of Wheeling High School and West Liberty University, where he earned a bachelor's degree in Business Administration. After graduating from West Liberty, he relocated to Dallas/Fort Worth where he worked in the food industry for sixteen years before becoming a teacher. He holds a master’s degree in higher education teaching from Texas A&M University-Commerce and is entering his thirtieth year as a teacher. He is the author of The History of Segregated I.M. Terrell High School, Fort Worth, Texas, The Clemente Spell and the soon to be released science fiction novel The Camera. DeFelice resides in St. Francis Village in Crowley, Texas with his wife Rene. Rene is also a native of Wheeling where she graduated from Wheeling Central and West Liberty with a degree in dental hygiene. They have been married for forty-three years and have two adult children and two grandchildren.

RESERVE AT THE OCPL

REVISIT THE LUNCH WITH BOOKS PRESENTATION