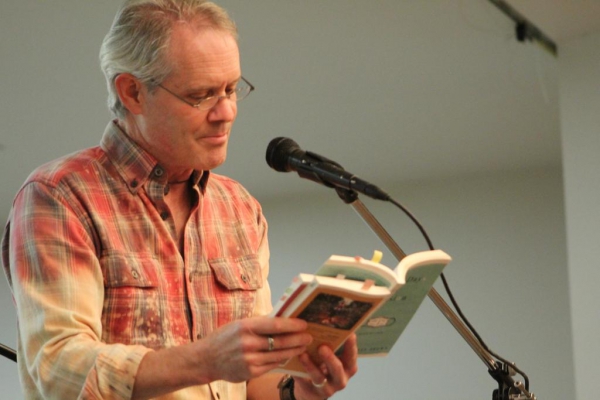 Nathan Brown took the Lunch with Books audience on the journey of a singer-songwriter during the COVID-19 pandemic on Tuesday, October 11th. The pandemic halted travel and the majority of income for all traveling musicians including Brown and his fellow musicians. Brown, who is also an award-winning poet and author, began taking commissions for poems during this time while he was at home. He received so many commissions that they were compiled into four books that tell the story of experiences during the pandemic and other impactful events during this time period. Brown read from these books and performed for the Lunch with Books audience during the presentation. Now trying to impact that COVID-19 had on traveling musicians, Nathan Brown was on a tour of the east coast during the stop at the Ohio County Public Library.

Nathan Brown is an author, songwriter, and award-winning poet living in Wimberley, Texas. He holds a PhD in English and Journalism from the University of Oklahoma where he’s taught for over 20 years. He served as Poet Laureate for the State of Oklahoma in 2013/14, and now travels fulltime performing readings, concerts, workshops and speaking on creativity, poetry, and songwriting. Nathan has published over 20 books. Most recent are his new collection of poems, In the Days of Our Seclusion, the first in a series, now known as the Pandemic Poems Project, that deals with the year of the pandemic, and a new travel memoir Just Another Honeymoon in France: A Vagabond at Large. He’s taught memoir, poetry, songwriting, and performance workshops from Tuscany and Ireland to the Sisters Folk Festival in Oregon, the Taos Poetry Festival, the Woody Guthrie Festival, Laity Lodge, the Everwood Farmstead Foundation in Wisconsin, as well as for Blue Rock Artist Ranch near Austin, Texas.

NEXT WEEK AT LUNCH WITH BOOKS

Lynn Emanuel is the author of five books of poetry. Her most recent book, The Nerve Of It: Poems New and Selected, was awarded the Lenore Marshall Award by The Academy of American Poets. Her sixth book has just been completed and is under consideration by her press Her awards include multiple fellowships from the National Endowment for the Arts, The National Poetry Series Award, the Eric Matthieu King Award also from The Academy of American Poets and, most recently, a fellowship from the Civitella Ranieri Foundation. She has been a judge for the National Book Awards and has taught at the Bread Loaf Writers' Conference, The Warren Wilson Program in Creative Writing, and the Bennington College Low Residency MFA program. Her poetry has been published and reviewed in Poetry, The New York Times Book Review, The New York Times Magazine, The Harvard Review, LA Review of Books, BOMB Magazine, and Publisher’s Weekly. West Virginia Poet Laureate Marc Harshman is the curator and host of the Wheeling Poetry Series.