Next People's University Livestream Series: The Struggle for Women's Rights 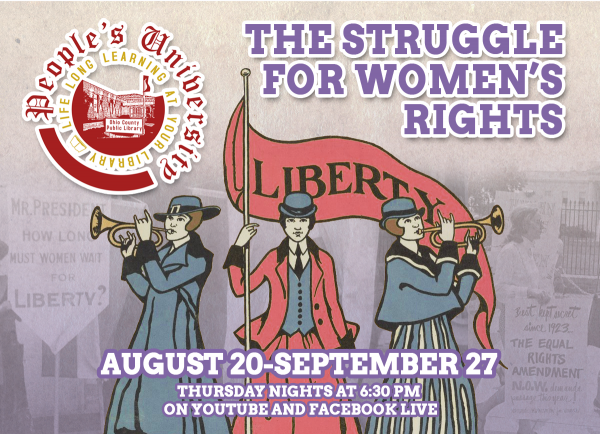 People's University "Around the World in Literature and Language" may have just wrapped up, but we already have a new series planned for you. Just in time to celebrate the 100th anniversary of the ratification of the 19th Amendment which prohibits the states and the federal government from denying the right to vote to citizens of the United States on the basis of sex (ratified August 18, 1920), we will launch the 30th installment in our People's University Series: "The Struggle for Women's Rights."

A look back at history shows that women have made great strides in the fight for equality, including women’s suffrage and inroads in equal opportunity in the workplace and education. Despite the tremendous progress made in the struggle for equality, women still face barriers to equal participation in society. In this six-class series, we will take a broad look back at the history of women's rights. We'll learn about powerful women of the past and the roles some of our founding mothers played in our own country's development, explore the suffrage movement on a local and national scale, and finally take a look at current legislation and issues women still deal with today.

People's University: "The Struggle for Women's Rights" will be broadcast live online, Thursday nights from 6:30 pm to 8 pm on YouTube Live and Facebook Live starting August 20th and running through September 27th.  View the full schedule and class details below.

The People’s University is a free program for adults who wish to continue their education in the liberal arts, featuring courses taught by experts in each subject that enable patrons to pursue their goal of lifelong learning in subjects such as history, philosophy, and literature.

Library-Sponsored Programs Policy
The purpose of Ohio County Public Library-sponsored programs is to provide education, information, and entertainment for library patrons. The Library reserves the right to exercise sole discretion in selecting and inviting presenters for its programs. In selecting presenters, the Library does not discriminate on account of race, color, age, sex, sexual orientation, physical or mental disability, political affiliation, religion, ancestry or national origin, and the views expressed by presenters of Library-sponsored programs, or by any person in attendance at the programs, do not necessarily reflect the views of the Library, its staff, and/or its representatives.