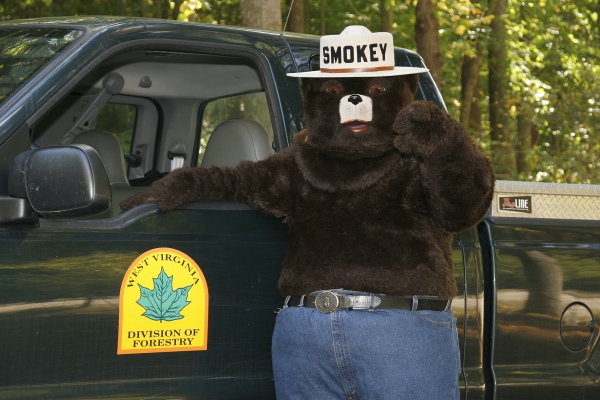 On Thursday, July 7, 2022, Smokey Bear is scheduled to visit the Ohio County Public Library with the West Virginia Division of Forestry. The event is scheduled for 2-3pm as part of the ongoing Read Beyond the Beaten Path Summer Reading Program, which continues until Saturday, July 16th.

Visit with Smokey Bear at the Ohio County Public Library

Creating a Campaign – and a Bear

The birth of Smokey Bear is linked to Pearl Harbor and World War II. On December 7, 1941, Japanese planes attacked Pearl Harbor. Shelling occurred by Japanese forces the spring following Pearl Harbor near Santa Barbara, California and Los Padres National Forest. Americans were shocked that activity had drawn near the mainland and fears grew over the protection of American soil – including forests.

Advertising efforts during World War II had been key to the war effort. Americans had grown accustomed to advertising for war bonds, salvage drives, recruiting efforts, victory gardens, and more. Smokey Bear would be the next of those campaigns – through a series of many changes.

Early forest fire campaign efforts had been seen as flawed and deemed too intimidating. In the book Smokey Bear 20252, the forest fire campaign’s second national coordinator Jim Felton explains, “Somone got the idea of asking Walt Disney to donate a poster. Bambi the movie was a big hit, so Disney did a Bambi poster and donated it to the campaign.” The year’s most memorable poster would feature a plea from Bambi offering the message, “Please Mister, Don’t Be Careless.” The poster would launch forest fire prevention efforts forward.

Disney only loaned the characters to the campaign for one year. However, the “Bambi” campaign had proven successful in proving successful in incorporating animals. In 1944, artist Albert Staehle would create the first depiction of Smokey Bear pouring a bucket of Water over a 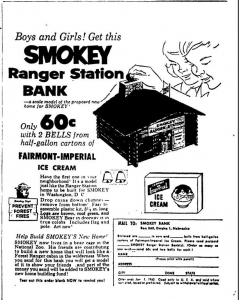 According to SmokeyBear.com and statistics provided by the National Interagency Fire Center, 87% of wildfires were caused by humans in 2019.

As he approaches eighty years old, with increased concern over wildfires and safe burning practices, work is not complete for Smokey Bear.

Smokey Bear is now equipped with new tools to help inform everyone about wildfire safety, fire science, the benefits of safe fire practices, provide resources, and more.  SmokeyBear.com is complete with helpful information, PSAs, educational materials, and much more to learn more about Smokey Bear’s work. Smokey can also be found on Instagram (@SmokeyBear) and Twitter (@Smokey_Bear.)