Surviving Brother of Partisan Brigade to Speak at Library, Thursday, April 27, at 7 PM 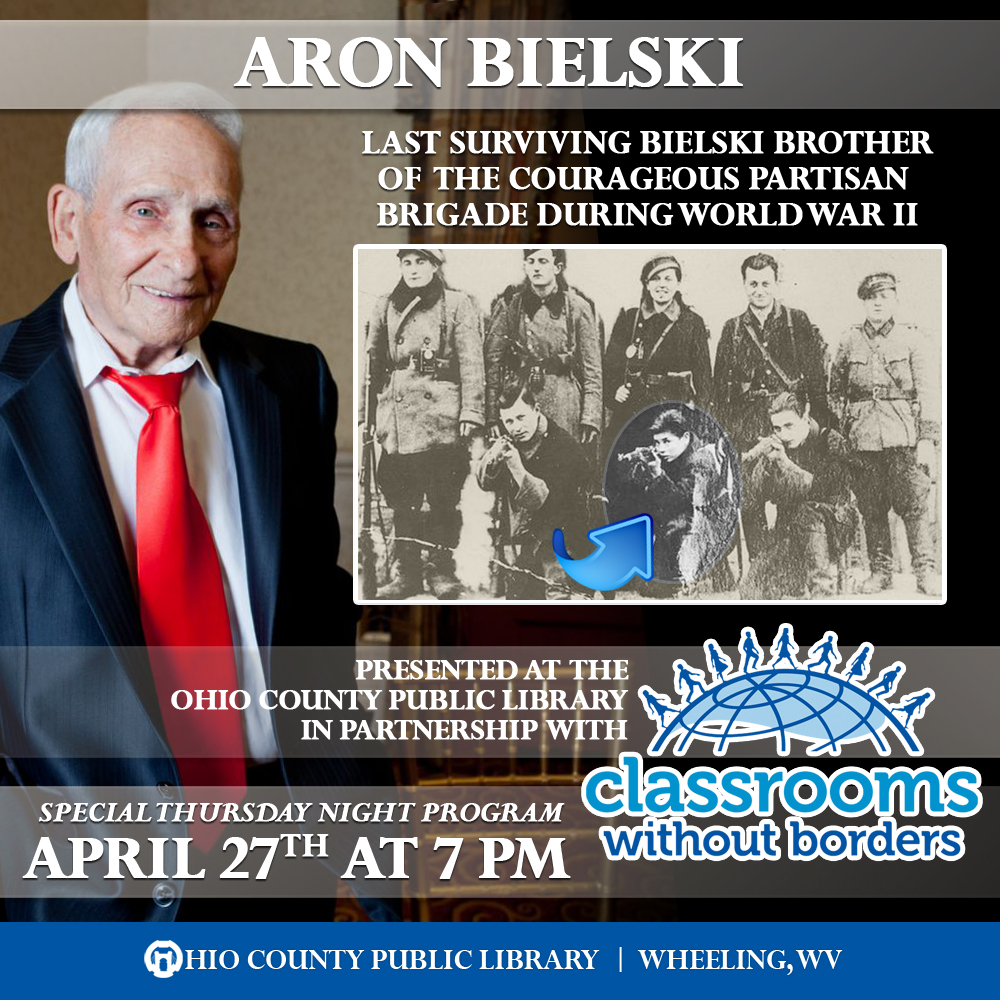 The incredible true story of the Bielski brothers was chronicled in books and made famous by the 2008 biographical movie “Defiance.” Tuvia, Asael, Zus and Aron Bielski each played a pivotal role as partisans fighting the Nazi regime while also rescuing Jews and organizing a community in the woods.

Today only Aron is alive to tell their story and at 91 years old, he still remembers it clearly.

Classrooms Without Borders – Wheeling and the Ohio County Public Library have partnered to bring this special Aron Bielski to Wheeling at 7 p.m., Thursday, April 27, for a program in the library's auditorium.

“People may think of this as a Jewish story, but it is so much more," said Barb Lewine of Classrooms Without Borders. "It is about the best of humanity in the worst of times. It is about saving lives and having the courage to fight back against a powerful malicious force to make a difference… which are lessons for all of us.”

Signed copies of Bielski's book, “Caught Between Hitler and Stalin,”  co-authored by Stuart Schulman, will be available to purchase following the program for a tax-deductible donation to the Bielski Foundation.

Bielski, the youngest of 10 brothers and 2 sisters, lived in the small village of Stankiewicze located between the town of Lida and Nowogródek in Soviet-controlled eastern Poland. It had been the home and farmstead of the Bielski family for three generations. Their village, in what is now western Belarus, was in a heavily forested region that Aron and his brothers knew well. What they did not know at the time was how valuable this knowledge would be to their survival.

Life in the village was difficult, especially for Jewish families. However, after 1941 when Germany invaded the Soviet Union, it became impossible. The Einsatzgruppen, Nazi killing squads, systematically rounded up Jewish families, murdering the majority of them in mass graves and forcing the remaining Jewish population into ghettos. As a young boy of 11, Aron witnessed the unthinkable. While hiding behind a tree, he saw his parents and two brothers dragged out of their home and forced onto a wagon. They were taken to a field where they were executed in a mass grave by the killing squads along with 4,000 other Jews from neighboring villages.

The four Bielski brothers—Tuvia, Asael, Zus, and Aron—fled to the Belarusian forest and organized a partisan unit to fight the Nazis. Tuvia, the oldest at 35, was a natural leader and became the commander. However, unlike other partisan groups, undermining the Nazi aggressions was not their only goal. Their primary objective was to rescue Jews and to offer them shelter, protection, and safe-haven. The living conditions were unpleasant, but the alternative was worse.  As their numbers grew, the refugee group slowly evolved into a dynamic forest community known as “Jerusalem in the woods.”

In July 1944, 2 ½ years after their ordeal began, the Soviet Army liberated the area and the Nazis were retreating. When the Bielski group emerged from the woods they had 1,230 survivors, making it the largest partisan group in all of German-occupied territory. Remarkably, what started as a desperate fight for survival became an extraordinary mission to save Jews from extermination. This amazing feat was the largest armed rescue of Jews by Jews during World War II.

In 1945 Aron and his brothers Tuvia and Zus emigrated to British Palestine where they fought in Israel’s War of Independence.

The brothers later moved to the United States, where they lived near each other in Brooklyn. Aron operated a taxi business in New York City. He and his wife, Henryka, retired to Palm Beach, Florida in 1998.

This special OCPL program starts at 7 pm, Thursday, April 27, in the auditorium.