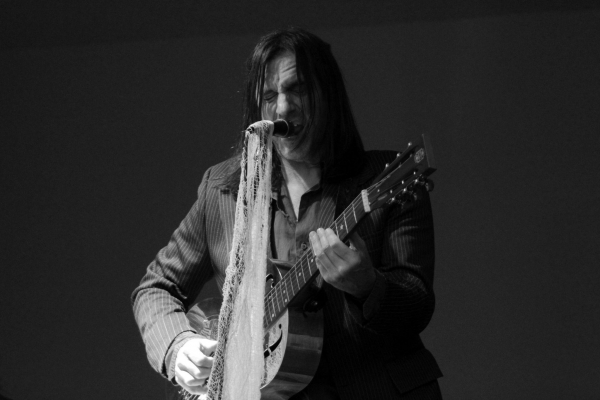 Things were a bit lycanthropic at the Ohio County Public Library on Tuesday, October 25th. A trifecta of werewolf events were held at the library in addition to the other Halloween events that were scheduled throughout the week. The day featured film, stories, laughter, horror, and music.

The first of these events was a Classic Horror Movie screening. Patrons were able to view the 1941 classic, The Wolf Man, featuring Lon Chaney, Jr. For some, this was their first time seeing the film. The movie was followed by a Lunch with Books Halloween Special: Ahh-Hoo Werewolves of Wheeling. The event featured five werewolf themed stories, all based around the Friendly City. The stories were by Cheryl Harshman, Kyle Knox, Laura Jackson Roberts, Sean Duffy, and Rich Knoblic. Attendees at the Lunch with Books special also had the opportunity to view the new music video of "Werewolves of Wheeling" by Adrian Niles. The day ended with a performance by singer-songwriter Adrian Niles, who was joined by Logan Seidler. Niles played a full set of original songs and a live version of "Werewolves of Wheeling."

For those who were not able to attend the lycanthropic-festivities, Sean Duffy, Ohio County Public Library Programming and Local History Director, has made the video of "Werewolves of Wheeling" available on the library blog. Additionally, all authors who read at Lunch with Books have contributed the text of their werewolf stories.

Click Here to View the Stories and the Video