LUNCH WITH BOOKS LIVESTREAM: Walter Reuther - The Most Dangerous Man in Detroit 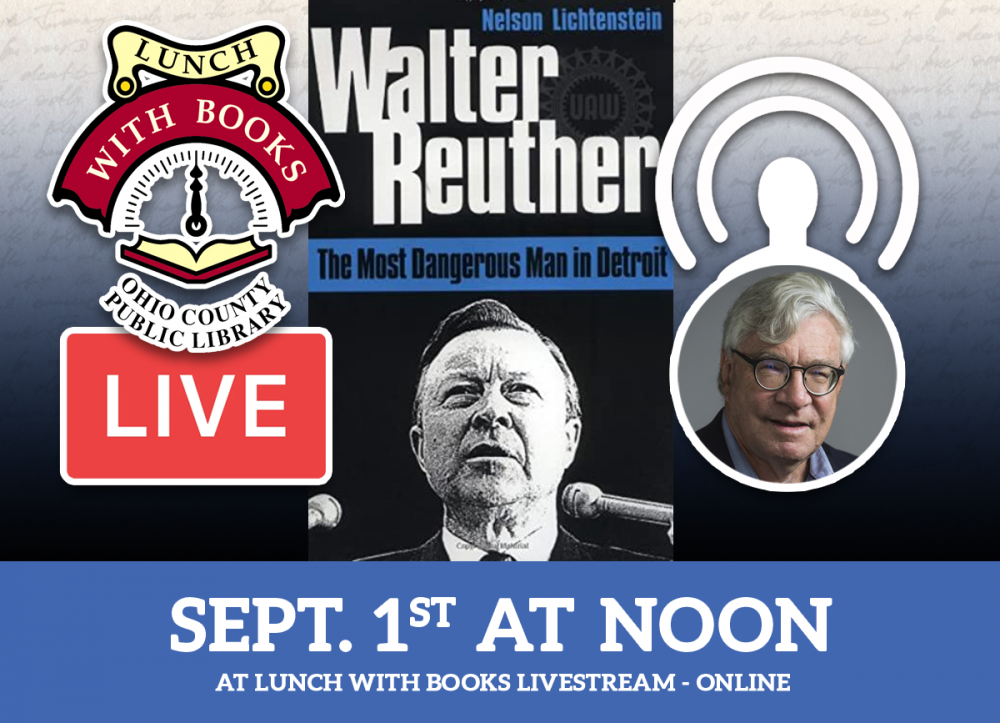 Remembering Wheeling native and national labor leader Walter Reuther on his birthday (born September 1, 1907, Wheeling, West Virginia—died May 9, 1970, Pellston, Michigan), Nelson Lichtenstein will discuss his book, Walter Reuther: The Most Dangerous Man in Detroit And The Fate Of American Labor. This program will be available to watch live on our Facebook page, our YouTube channel, and on the OCPL website's LWB Livestream page.

Supported by The Walter and May Reuther Memorial Fund.

Walter Reuther, the most imaginative and powerful trade union leader of the past half-century, confronted the same problems facing millions of working Americans today: how to use the spectacular productivity of our economy to sustain and improve the standard of living and security of ordinary Americans. As Nelson Lichtenstein observes, Reuther, the president of the United Automobile Workers from 1946 to 1970, may not have had all the answers, but at least he was asking the right questions.

The Most Dangerous Man in Detroit vividly recounts Reuther's remarkable ascent: his days as a skilled worker at Henry Ford's great River Rouge complex, his two-year odyssey in the Soviet Union's infant auto industry in the early 1930s, and his immersion in the violent labor upheavals of the late 1930s that gave rise to the CIO. Under Reuther, the autoworkers' standard of living doubled.

[Note: Book previously published by Basic Books as The Most Dangerous Man in Detroit: Walter Reuther and the Fate of American Labor - 1996 Notable Book of the Year from the New York Times; Recipient of the Phi Beta Kappa Award; Distinguished Honorable Mention from the Sydney Hillman Foundation.]

SPEAKER BIO: Dr. Lichtenstein is Distinguished Professor in the Department of History at UCSB, where he directs the Center for the Study of Work, Labor, and Democracy. He received his B.A. from Dartmouth College in 1966 and his Ph.D. from the University of California, Berkeley in 1974. Thereafter he worked in publishing in New York and taught at The Catholic University of America and at the University of Virginia before joining the UCSB faculty in 2001.

He is the author or editor of 16 books, including a biography of the labor leader Walter Reuther and State of the Union: A Century of American Labor (2002, 2013 revised). His most recent books are Achieving Workers’ Rights in the Global Economy (2016); The Port Huron Statement: Sources and Legacies of the New Left’s Founding Manifesto (2015); The ILO From Geneva to the Pacific Rim (2015); The Retail Revolution: How Wal-Mart Created a Brave New World of Business (2009, 2010); The Right and Labor in America: Politics, Ideology, and Imagination (2012); A Contest of Ideas: Capital, Politics and Labor (2013); and American Capitalism: Social Thought and Political Economy in the Twentieth Century (2006). He has served on the editorial board of numerous journals and now is a member of the editorial board of the University of Illinois Press series in working-class history.

Professor Lichtenstein has held fellowships from the National Endowment for the Humanities, the Rockefeller and Guggenheim Foundations, the University of California, and from the Fulbright Commission and the Oregon Center for the Humanities. In 2008 he was elected to the Society of American Historians and in 2012 the Sidney Hillman Foundation awarded him its Sol Stetin Award for lifetime achievement in labor history. His reviews and opinion pieces have appeared in The Los Angeles Times, The New York Times, Dissent, New Labor Forum, American Prospect, and academic journals. Reporters often seek is comments when they write on labor, politics, and supply chain issues.

He is married to Eileen Boris, the Hull Professor of Feminist Studies at UCSB.