CIVIC EMPATHY THROUGH HISTORY: Opening of New Exhibit and Project in Partnership with Heinz History Center 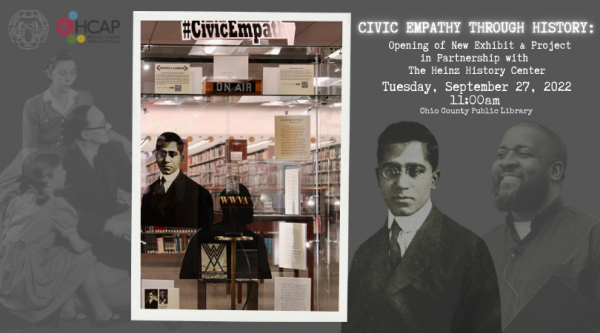 The Ohio County Public Library in Wheeling, WV is pleased to announce the recent installation of an extremely important new exhibit and project. Titled “Civic Empathy Through History,” the project has been created in partnership with the Senator John Heinz History Center in Pittsburgh, PA. It will be launched with a press conference and special Lunch with Books presentation on Tuesday, September 27th.  The press conference, at 11:00am, will be attended by local community leaders. The noon program will feature Mr. Scott and author Tom DeWolf.

The artifact the Library chose to highlight is a typewritten speech from the YWCA Collection that was delivered on February 9, 1936, by Harry H. Jones, Wheeling’s only African American attorney at the time. He spoke on the city’s White-owned radio station WWVA—indicating that his target audience was the White residents of Wheeling.

The address, titled “Wheeling’s 20th Man,” referred to Black’s representing one twentieth, or 5%, of the city’s population at the time. The speech centered on the conditions faced by Wheeling’s African American citizens under “Jim Crow” segregation. In a courageous challenge to the Wheeling community, Jones asked people to consider the inequality of Jim Crow, in terms of access to jobs, housing, recreation, and education. He appealed for empathy from the White community for the African American community and asked listeners to consider the legal and social changes needed to address these inequities.

The exhibit attempts to illustrate this event and period of time with a diorama that includes images and text about Lincoln School, various leaders in the Black community over time, and events that illustrate the struggle to overcome a segregated history.  The exhibit suggests that Wheeling’s past still impacts the present and that the phrase “justice and candor” from the “20th Man” speech is still relevant for us.

The Library asked Ron Scott, Director of Cultural Diversity & Community Outreach at YWCA Wheeling, to rewrite Harry Jones’s speech as if he was delivering it today. You can listen to the original speech as well as Ron’s modern version, “Acceptance, Understanding, & Opportunity. The 20th Man That Stands Before You,” and read more about the entire project on the Library's website, here:  https://www.ohiocountylibrary.org/history/7663.

The Civic Empathy project with the Heinz History Center brings together a network of 15 sites throughout our region that create engaging experiences to build empathy and serve as the foundation for civic engagement. The project highlights stories and artifacts across these sites that show how people have taken action to make positive impacts on their communities. The Library, along with the WALS Foundation, have the honor of representing West Virginia.

Following the press conference on September 27th, a special Lunch With Books program will be held at noon featuring a conversation with author Tom DeWolf (https://tomdewolf.com/) and Ron Scott.

DeWolf is the author The Little Book of Racial Healing and Inheriting the Trade, the story of his experiences in the making of the Emmy-nominated, PBS documentary, "Traces of the Trade," in which he and relatives confront their family's legacy as the largest slave-trading dynasty in U.S. history. the book exposes hidden elements of history and shows how traumatic, unhealed wounds from the past continue to impact everyone today.  The film will be screened that evening at the Library at 6:00 PM.

Since 2013, Mr. DeWolf has served as Executive Director for Coming to the Table, a non-profit organization that provides leadership, resources, and a supportive environment for all who wish to acknowledge and heal wounds from racism that is rooted in the United States’ history of slavery.

At Lunch With Books, Tom and Ron will come to the table to discuss Civic Empathy, the state of race relations in Wheeling and nationally, and how to create a more connected and truthful community and world from the starting point of Harry Jones's 1936 20th Man speech, the Library's featured exhibit artifact. Attendees are welcome to join the discussion.

The Ohio County Public Library hopes that this exhibit and future educational programs related to the exhibit will set the right tone for discussion, education, healing, civility, and community.