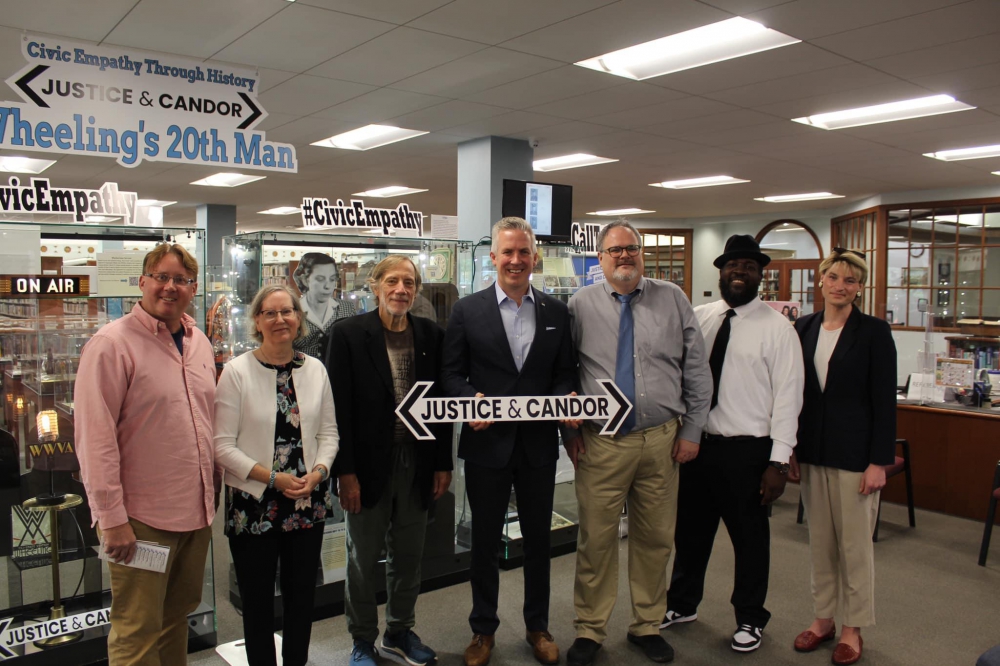 As a member of the Heinz History Center Affiliates (HCAP) program, the Ohio County Public Library has the honor of representing our region by partnering with the Heinz Center for the “Civic Empathy Through History” project, which brings together a network of 15 sites throughout our region that create engaging experiences to build empathy and serve as the foundation for civic engagement. A part of the Grable Foundation’s Tomorrow Grants program, the project highlights stories and artifacts across Affiliate sites that show how people have taken action to make positive impacts on their communities. 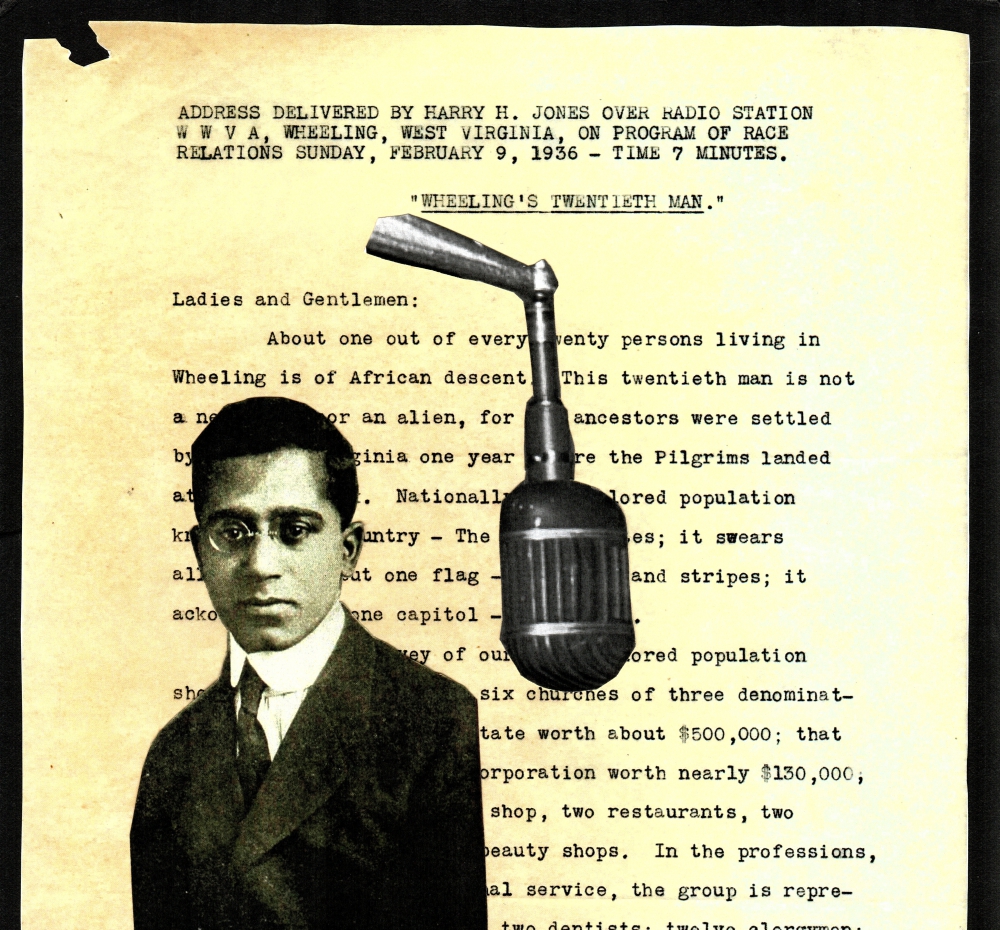 The Library's featured artifact is a typewritten speech from the YWCA Blue Triangle Collection. On February 9, 1936, Harry H. Jones, Wheeling’s only African American attorney at the time, delivered a talk on the city’s white-owned radio station WWVA. Titled “Wheeling’s 20th Man,” it referred to Black’s representing one twentieth, or 5%, of the city’s population at the time. The speech centered on the conditions faced by Wheeling’s African American citizens under “Jim Crow,” a system designed to segregate Black and White citizens into separate communities. In a courageous challenge to the Wheeling community, Jones asked people to consider the inequality of Jim Crow, in terms of access to jobs, housing, recreation, and education. He appealed for empathy for the African American community and asked listeners to consider the legal and social changes needed to address these inequities.

Click to watch a video created by Wheeling Central High School students after visiting the exhibit.

Click to hear about the project on WV Public Broadcasting.

Like most of the rest of the country, Civil Rights protests in Wheeling were met with police pushback, but African American leaders persevered.

Read the Report of WV Human Rights Commission Relative to the Racial Tension Situation in Wheeling on the Weekend of Jan. 2, 1971.

As one consequence of these struggles to overcome a segregated history, the town has suffered from the exodus of younger African Americans who have often left seeking greater economic and social opportunities. Many of those who have stayed have worked to improve Wheeling’s diversity and community harmony by advocating for economic and social justice. Some have founded minority owned businesses. These entrepreneurs face the same challenges of all small businesspeople, but also wrestle with the obstacles remaining from Jim Crow.

Harry H. Jones’s “Wheeling’s 20th Man” speech was delivered on WWVA radio, February 9, 1936. While speaking directly to the people of Wheeling, Jones advised “Justice and candor require attention to the handicaps suffered by Wheeling’s twentieth man.” He went on to describe an entirely separate Black community, with its own doctors, dentists, restauranteurs, shop keepers, hairdressers, and even funeral directors. Wheeling in 1936 was actually two cities, side-by-side but completely separate. This constituted Wheeling under Jim Crow: separate, and decidedly not equal.

Wheeling’s past still impacts the present. The phrase “justice and candor” from the “20th Man” speech is still relevant for us. We want to hear from you. 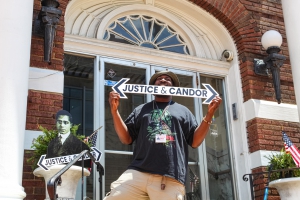 We asked Ron Scott to rewrite the Jones speech from a 2022 perspective. Read Ron's modern take, “Acceptance, Understanding, & Opportunity. The 20th Man That Stands Before You."

Listen to Ron's reading of his rewrite HERE.

JUSTICE CREATES OPPORTUNITIES FOR ALL TO THRIVE:

Consider speaking or reflecting candidly, openly, and honestly, on this issue. Fill out a form or record a video sharing your experience visiting the exhibit. What feelings did it evoke? Do you have a personal story of overcoming obstacles? What more can be done in the name of Justice and Candor?

After you view the exhibit, fill out our CALL TO ACTION FORM.

Harry H. Jones wrote a column titled, "Along the Color Line," which ran in the Wheeling Sunday News-Register from Feb. 1946 to Jan. 1948.

September 27, 2022 - 11:00am - CIVIC EMPATHY THROUGH HISTORY: Opening of New Exhibit and Project in Partnership with Heinz History Center

The exhibit is now officially open! 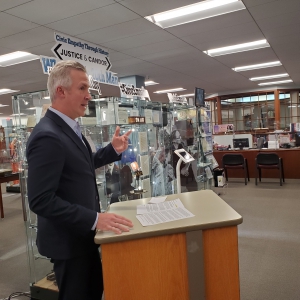 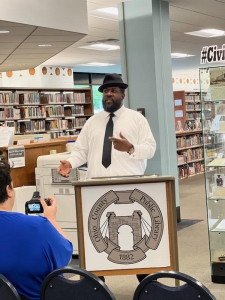 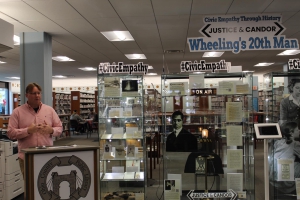 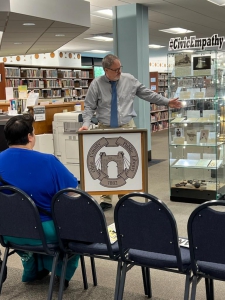 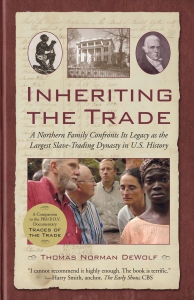 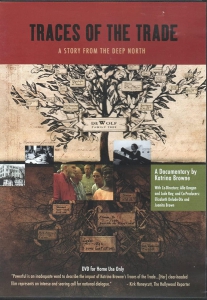 Watch the Film on Kanopy

Jan. 17, 2023 at Lunch With Books: Reliving the Pythian with Daryl Clausell

Jan. 24, 2023 at Lunch With Books: “Disturbance at Chapline Street” - A Panel Discussion

All exhibit summaries can be viewed HERE. 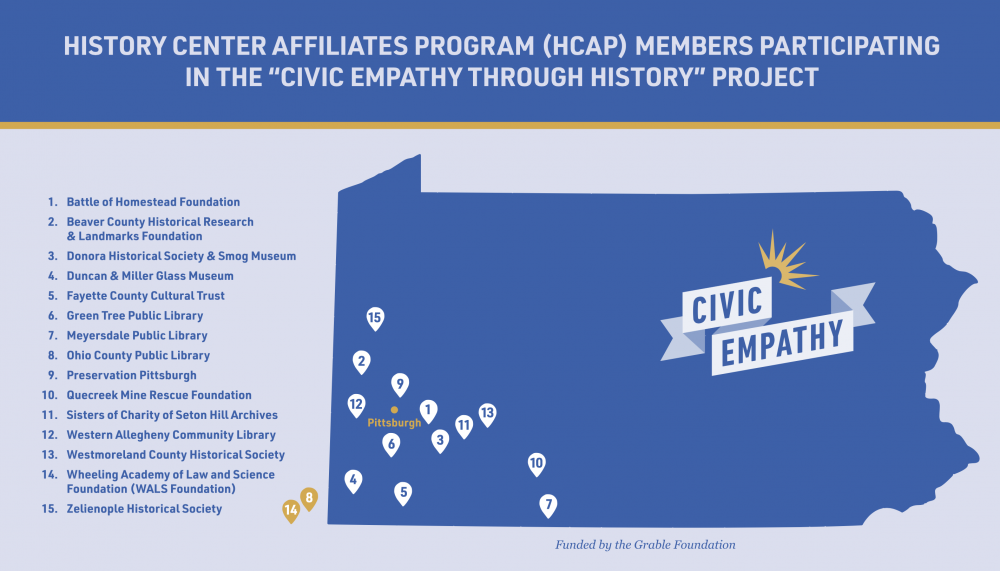