LUNCH WITH BOOKS: 135th anniversary of the Statue of Liberty Dedication 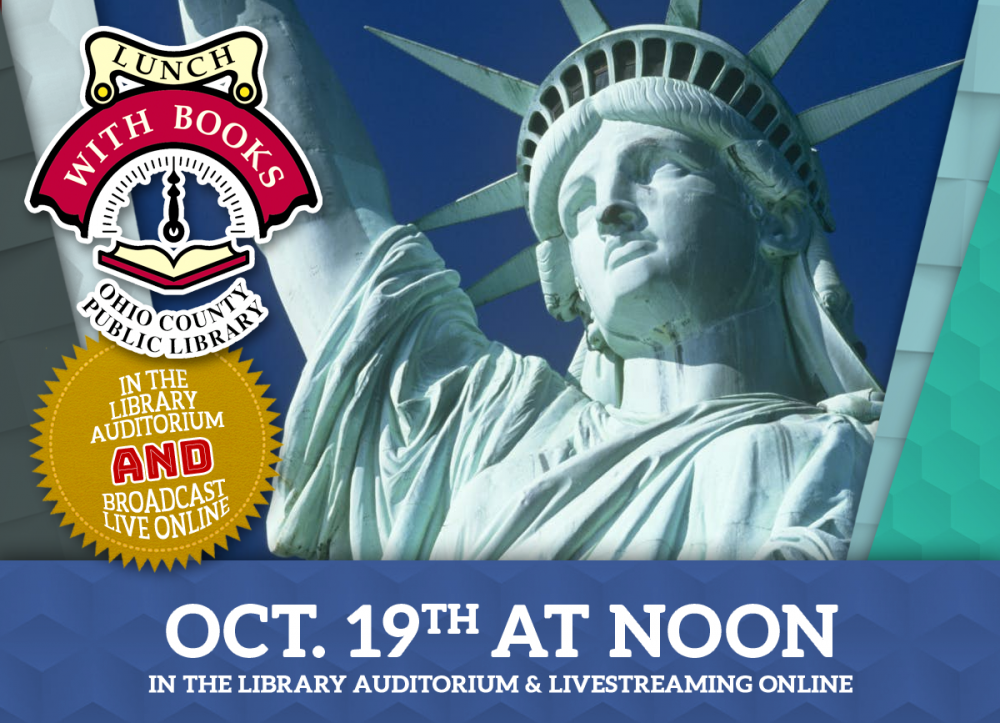 Dedicated October 28, 1886, “Liberty Enlightening the World” is our beloved behemoth of a copper statue designed by sculptor Frédéric Auguste Bartholdi, and gifted to the people of the United States of America by the people of France. She has held her torch high in NY Harbor, through triumph and tragedy, for the last 135 years. In this multi-media program, we will look at the history, assembly and dedication of the statue, its original symbolism, and what it has come to mean from many perspectives over time. The story will be told through music, images, recordings, poetry led by Dr. Bonnie Thurston, and prose narrated by Sean Duffy. We will end with a group recitation of Emma Lazarus’s sonnet, “The New Colossus.”

Joining us for this program will be guitarist Aaron Carey! Aaron has been teaching and performing for over 20 years both locally and nationally. He earned a Master of Education from Bethany College and a Bachelor of Arts in Music from West Virginia University. A Bethany College music faculty member since 2005, Carey also teaches at CA House Music and is active as a solo performer and in several groups. Carey frequently releases original music through Bindrune Recordings in North America and Nordvis Produktion in Europe.

FEATURED BOOK: Enlightening the World: The Creation of the Statue of Liberty, by Yasmin Sabina Khan (Cornell University Press, ©2010)  [ Reserve a copy of this book from the Library  |  Download the ebook through Hoopla with your OCPL library card  |  Support local bookstores by buying this book online through bookshop.org or indiebound.org ]

Conceived in the aftermath of the American Civil War and the grief that swept France over the assassination of Abraham Lincoln, the Statue of Liberty has been a potent symbol of the nation's highest ideals since it was unveiled in 1886. Dramatically situated on Bedloe's Island (now Liberty Island) in the harbor of New York City, the statue has served as a reminder for generations of immigrants of America's long tradition as an asylum for the poor and the persecuted. Although it is among the most famous sculptures in the world, the story of its creation is little known.

In Enlightening the World, Yasmin Sabina Khan provides a fascinating new account of the design of the statue and the lives of the people who created it, along with the tumultuous events in France and the United States that influenced them. Khan's narrative begins on the battlefields of Gettysburg, where Lincoln framed the Civil War as a conflict testing whether a nation conceived in liberty, and dedicated to the proposition that all men are created equal... can long endure.

Inspired by the Union's victory and stunned by Lincoln's death, Édouard-René Lefebvre de Laboulaye, a legal scholar and noted proponent of friendship between his native France and the United States, conceived of a monument to liberty and the exemplary form of government established by the young nation. For Laboulaye and all of France, the statue would be called La Liberté Éclairant le Monde—Liberty Enlightening the World.

Following the statue's twenty-year journey from concept to construction, Khan reveals in brilliant detail the intersecting lives that led to the realization of Laboulaye's dream: the Marquis de Lafayette; Alexis de Tocqueville; the sculptor Auguste Bartholdi, whose commitment to liberty and self-government was heightened by his experience of the Franco-Prussian War; the architect Richard Morris Hunt, the first American to study architecture at the prestigious École des Beaux-Arts in Paris; and the engineer Gustave Eiffel, who pushed the limits for large-scale metal construction. Also here are the contributions of such figures as Senators Charles Sumner and Carl Schurz, the artist John La Farge, the poet Emma Lazarus, and the publisher Joseph Pulitzer.

While exploring the creation of the statue, Khan points to possible sources—several previously unexamined—for the design. She links the statue's crown of rays with Benjamin Franklin's image of the rising sun and makes a clear connection between the broken chain under Lady Liberty's foot and the abolition of slavery. Through the rich story of this remarkable national monument, Enlightening the World celebrates both a work of human accomplishment and the vitality of liberty.