LUNCH WITH BOOKS: All Zombies are Local: Deconstructing the Pittsburgh Zombie 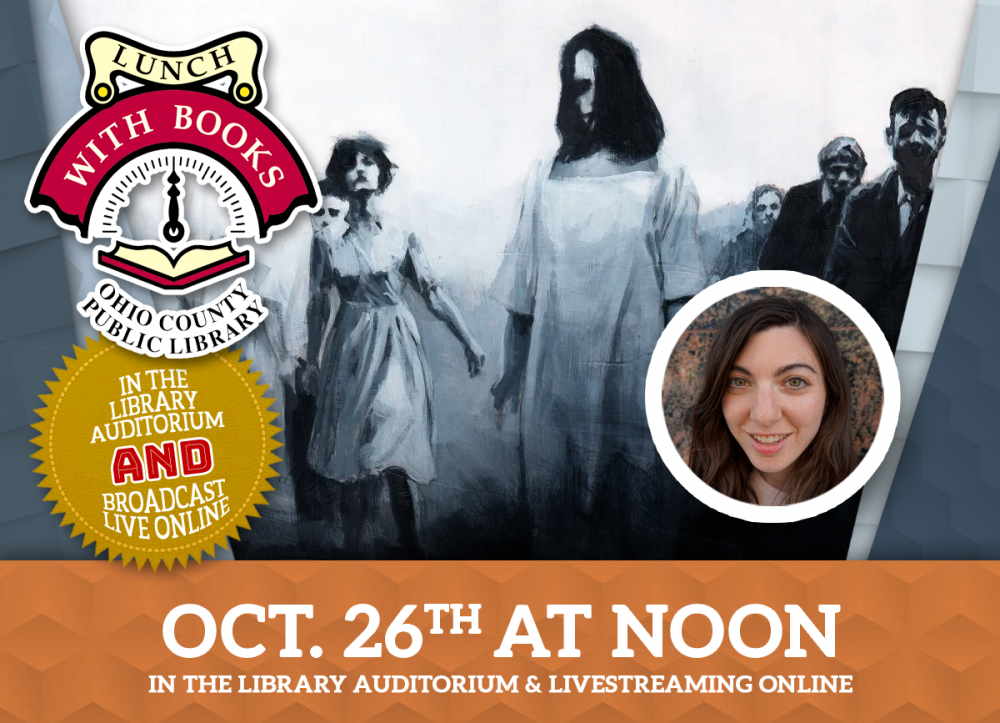 (or, “They’re Coming to Get You, Wheeling”) with presenter Allison Pitinii Davis.

Did you know that George A. Romero's 1968 cult film Night of the Living Dead (watch for free through Hoopla with your OCPL Library card) was filmed in Pittsburgh? Get ready for Halloween by learning more about the connections between the Rust Belt, zombies, and labor strikes. This presentation will feature clips from the film, an overview of Hugh S. Manon's article “Living Dead Spaces: The Desire for the Local in the Films of George Romero,” and a contemporary poetic take on the Rust Belt zombie genre.

In addition to being in-person in the Library auditorium, this program will be available to watch live on Facebook Live, on YouTube, and on the OCPL website's LWB Livestream page.  Log into your Facebook or YouTube account during the program to leave questions for Allison in the comments box. She will answer them during the live broadcast.

Watch our zombie short NIGHT OF THE LIVING DEAD tribute video:
"They're Coming To Get You, Wheeling!"

It's the long-awaited Zombie short-film from LWB Productions. A Halloween special edition. You won't know whether to cry tears of horror or tears of laughter or tears of boredom, but you will most certainly cry or your money back! Warning: this movie is too intense for some viewers. Well, maybe like 3 viewers. But even they laughed a lot. Do. Not. Miss!

PRESENTER BIO: Allison Pitinii Davis is the author of Line Study of a Motel Clerk (Baobab, 2017), a finalist for the Ohioana Book Award and the National Jewish Book Award in Poetry. Her work has appeared in Best American Poetry, POETS.org, The New Republic, and elsewhere. She serves as the Interim Writing Center Coordinator at Bethany College.

FEATURED STREAMING MOVIE: Night Of The Living Dead, directed by George A. Romero (1968 - unrated, not recommended for children)  [ Stream online through Hoopla with your OCPL library card ]

Night of the Living Dead opens with chaos—the brains of the recently deceased have become mysteriously reanimated, causing the dead to rise and feed on human flesh. While visiting their father's grave, Barbra (Judith O'Dea) and her brother Johnny (Russell Streiner) are attacked by a strange shuffling man. Barbra runs into a farmhouse where she encounters Ben (Duane Jones), and they must find a way to save themselves from the horde of zombies.

Hailed as one of the most influential horror films of all time, George Romero's Night of the Living Dead is inspirational, thought-provoking, and, most importantly, terrifying!

FEATURED DVD: Birth of the Living Dead (documentary), directed by Rob Kuhns (2013). [ Reserve a copy from the Library ]

In 1968 a young college drop-out named George A. Romero directed Night of the Living Dead, a low-budget horror film that shocked the world, became an icon of the counterculture, and spawned a zombie industry worth billions of dollars that continues to this day.

Birth of the Living Dead shows how Romero gathered an unlikely team of Pittsburghers — policemen, iron workers, teachers, ad-men, housewives, and a roller-rink owner — to shoot a revolutionary guerrilla-style film that went on to become a cinematic landmark, offering a profound insight into how our society worked in a singular time in American history.

FEATURED BOOK: Taking Place: Location and the Moving Image, by John David Rhodes (University Of Minnesota Press, 2011)  [ Reserve a copy from the Library  |  Support local bookstores by buying this book online through indiebound.org ]

Taking Place argues that the relation between geographical location and the moving image is fundamental and that place grounds our experience of film and media. Its original essays analyze film, television, video, and installation art from diverse national and transnational contexts to rethink both the study of moving images and the theorization of place.

Chapter 14 of this book, entitled "Living Dead Spaces: The Desire for the Local in the Films of George Romero," theorizes the structure and function of localness in cinema, examining the split viewership that results when films embrace marginal, relatively unknown real spaces as a backdrop for fictional narrative. George Romero’s early films, shot on location in and around Pittsburgh, Pennsylvania, provide a particularly instructive case study in the psychodynamics of localness in film.