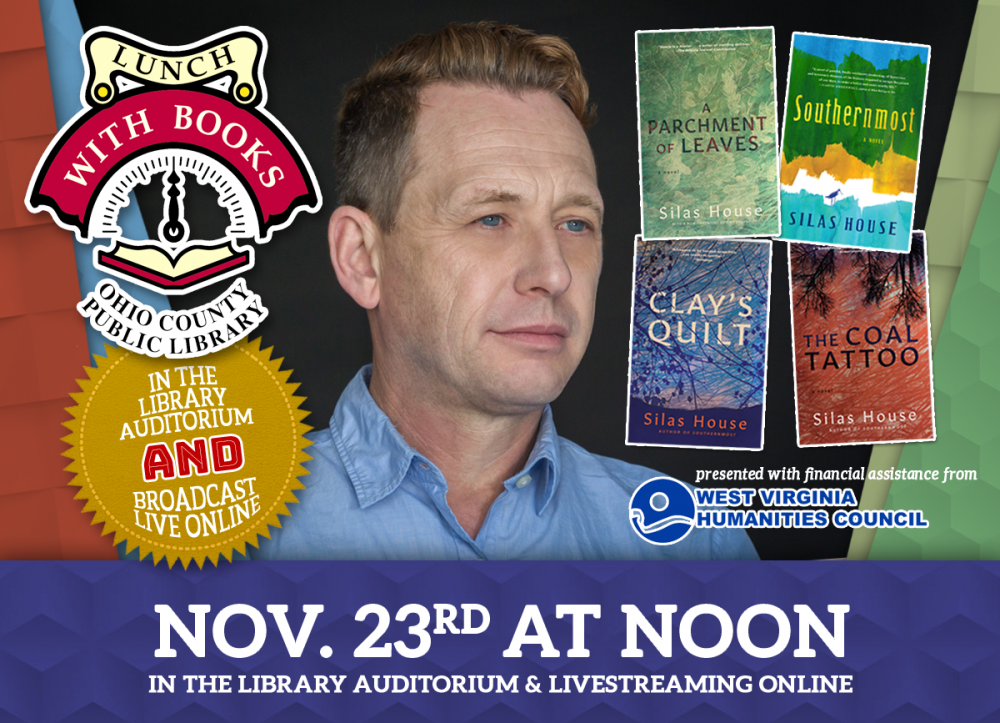 Silas House is the nationally bestselling author of six novels—Clay's Quilt, 2001; A Parchment of Leaves, 2003; The Coal Tattoo, 2005; Eli the Good, 2009; and Same Sun Here (co-authored with Neela Vaswani) 2012, and Southernmost (June 2018)—as well as a book of creative nonfiction—Something's Rising, co-authored with Jason Howard, 2009; and three plays.

House is a former commentator for NPR's "All Things Considered". His writing has appeared recently in Time, The Atlantic, Ecotone, The Advocate, Garden and Gun, and Oxford American. House serves on the fiction faculty at the Spalding School of Creative Writing and as the NEH Chair at Berea College.

He is a member of the Fellowship of Southern Writers, the recipient of three honorary doctorates, and is the winner of the Nautilus Award, an EB White Award, the Appalachian Book of the Year, the Storylines Prize from the New York Public Library/NAV Foundation, the Lee Smith Award, and many other honors, including an invitation to read at the Library of Congress. Southernmost was a long listed finalist for the Carnegie Medal for Excellence in Fiction and appeared on several Best of 2018 lists of The Advocate, Booklist, Paste, Southern Living, Garden and Gun, and others. The book was also awarded the Weatherford Award as well as the Judy Gaines Young Award.

As a music journalist, House has worked with artists such as Kacey Musgraves, Kris Kristofferson, Lucinda Williams, Jason Isbell, Leann Womack, Tyler Childers, and many others. House is also host of the popular podcast "On the Porch". In 2021 he was the recipient of the Governor's Award from Kentucky Governor Andy Beshear for his service to the arts in his home state.

FEATURED BOOK: Southernmost, by Silas House ( Algonquin Books, 2018)
[ Reserve a copy through the Library  |   Check out the ebook or streaming audiobook with your OCPL Library card through WVDeli or HooplaDigital  |  Purchase a copy online through bookshop.org to support local book stores or visit indiebound.org find Southernmost in a bookstore near you.  |  Purchase online through Amazon  ]

In this stunning novel about judgment, courage, heartbreak, and change, author Silas House wrestles with the limits of belief and the infinite ways to love.

In the aftermath of a flood that washes away much of a small Tennessee town, evangelical preacher Asher Sharp offers shelter to two gay men. In doing so, he starts to see his life anew—and risks losing everything: his wife, locked into her religious prejudices; his congregation, which shuns Asher after he delivers a passionate sermon in defense of tolerance; and his young son, Justin, caught in the middle of what turns into a bitter custody battle.

With no way out but ahead, Asher takes Justin and flees to Key West, where he hopes to find his brother, Luke, whom he’d turned against years ago after Luke came out. And it is there, at the southernmost point of the country, that Asher and Justin discover a new way of thinking about the world, and a new way of understanding love.

Southernmost is a tender and affecting book, a meditation on love and its consequences.

REVIEWS:
"Given all the stories we have of the South in print, this one is, in a quiet way, revolutionary."
—Asheville Citizen-Times

"Southernmost offers no easy conclusions about forgiveness, religion or moral courage. Rather, this novel weighs the high costs of confronting the way our beliefs evolve in response to our lives, as well as the costs of denying that evolution. But House also succeeds in telling a satisfying story—one that resonates beyond the issues of the day, toward something deeper and larger.”
—Knoxville News-Sentinel

“Using detailed imagery and rich dialogue, House allows readers to witness how the transformation of one’s moral foundations, no matter how noble, can disrupt a person’s sense of community and security. It is also a story of freeing the self from the captivity of our various societal structures. House’s depiction of the contemporary South is vivid, accessible and incredibly enchanting, even during the book’s darkest moments. Southernmost is a remarkable meditation on faith, morality, loss and love—a transcendent work that has the power to entertain, educate and heal at the same time.”
—BookPage

“His storytelling is rich, but also spare, with descriptive passages that engage all five senses . . . And his characters . . . are so complicated and real that it’s a shame to have to put the book down. Most of all, Southernmost is a reminder that life is hard, and it is beautiful.”
—Booklist (starred review)