LUNCH WITH BOOKS: Chuck Howley: The Case for His Enshrinement in the Pro Football Hall of Fame 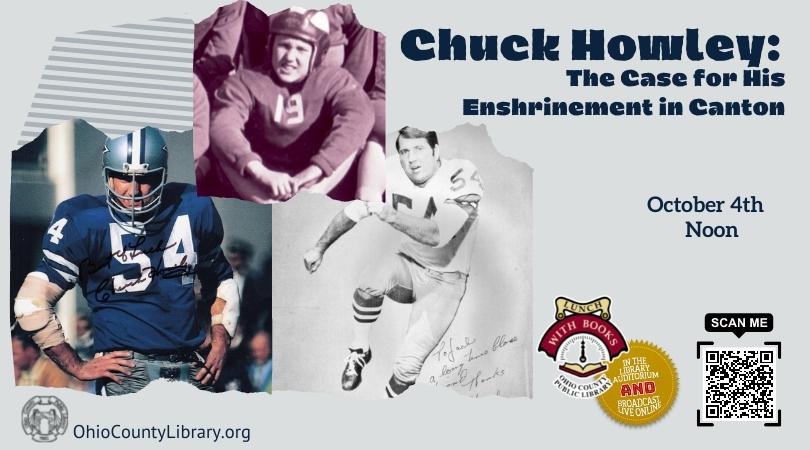 A Warwood boy and graduate of Corpus Christi Grade School, Chuck Howley was an All-State football player at Warwood High School (`54). He earned All-Southern Conference honors three times and Southern Conference Athlete of the Year (`57) at West Virginia University. He made WVU history by starring and lettering in five sports – football, track, wrestling, gymnastics and swimming. He won the Southern Conference diving championship in 1957. Chuck was the first round draft choice of the Chicago Bears in 1958 and was traded to the Dallas Cowboys (`61) where he became a 6-time All-Pro linebacker, Super Bowl Champion and Super Bowl V MVP. Howley was the first defensive player and the only player from a losing team to be named MVP of a Super Bowl. Noted for his speed, Howley became one of the greatest linebackers to play the game. Legendary Dallas coach Tom Landry once said, “I don’t know that I’ve seen anybody better at linebacker than Howley.” Though a finalist again this year, Chuck has not yet been enshrined at Canton in the Pro Football Hall of Fame. Why? Join Michael Beatty and other Howley friends and family, as we discuss his legendary life, career, and accomplishments, making the case for the gold jacket.