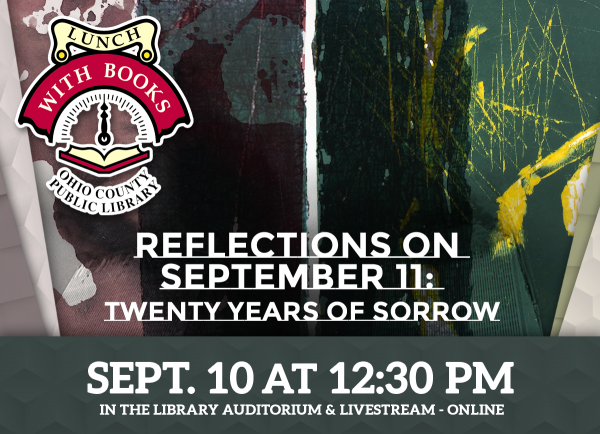 A new exhibit featuring the work of a local artist will officially open with a program featuring talks and a public reception in the Ohio County Public Library’s Auditorium at 12:30 pm on Friday, Sept. 10.

"Reflections on September 11: Twenty Years of Sorrow" will feature the poignant work of visual artist Georgia Tambasis, who created, in real time on September 11, 2001, art as she listened to events unfolding on the radio. Having no visuals of the tragedy except those in her imagination, Georgia created an evocative series of works reflective of her own emotional journey.

After earning a degree in nursing from Thiel College and working in the field for over a decade, Georgia pursued her interest in art. She received a B.F.A. from Youngstown State University and holds an M.F.A. from the University of Texas at San Antonio. She has received numerous awards and honorable mentions in national and regional exhibitions. Currently she is an artist, curator, and educator living in Wheeling, WV, and her artwork includes drawing, printmaking, painting, sculpture, and ceramics.

About her work Georgia states, "I paint, draw, sculpt, throw on the potter’s wheel and alter forms similar to the way when I was drawing on dirt with sticks and stacking rocks as a child in a small village in Greece. Sometimes I have a general idea in my mind of what I want to accomplish, and sometimes I just allow my hands to move as they wish with the material available. I usually make a body of work in a series. This particular series is my personal reaction to 9/11 and its aftereffects."

The program will open with remarks by Kelly Close, MD, MPH, Medical Director, Urgent Care of WVU Medicine Wheeling Hospital and an emergency physician. On September 11, 2001, Dr. Close was the coordinator of the medical response as the National Coordinator of Disaster Volunteers for the American Red Cross at ground zero in NYC. She happened to be in Connecticut at the time and was on site within an hour of the attack. Her talk will include several photos she took of the day and the weeks after, as well as comments on how communities and individuals can prepare themselves. Also an adjunct instructor at the University of Pittsburgh's School of Health and Rehabilitation Sciences, Dr. Close has spent the past three decades focused on directly improving the plight of those in need but more importantly, developing systems and policies to address their issues on a more global and sustained level. She graduated cum laude from the University of Pittsburgh Medical School and obtained a master’s degree in Public Health in Health Policy and Management from Yale University.  Prior to 9/11, Dr. Close developed the protocols for the current Medical Reserve Corps, which were originally housed within the Red Cross. She also trained in Israel with the Israel Defense Forces and the Israel Red Cross in 2011 on disasters and bioterrorism.

Our second speaker will be Kayce Mobley, Ph.D., Assistant Professor of Political Science and Chair, Department of History and Political Science at Bethany College. Dr. Mobley will discuss the impact of September 11, 2001, on policies regarding the repatriation of fallen soldiers. Dr. Mobley joined the Department of History and Political Science at Bethany in the fall of 2018. A native of Brunswick, Ga., she earned her B.A. in political science with a minor in classical studies from the University of the South in Sewanee, Tenn., in 2010, and then completed her Ph.D. in political science at the University of Georgia in 2015. After finishing graduate school, she taught at Wabash College in Indiana and Pittsburg State University in Kansas before moving to Bethany.

Ms. Tambasis will conclude the program by reflecting on the events of twenty years ago through her art.

A reception during which the public is invited to have a closer look at the new exhibit and interact with our presenters will follow the program. Complimentary light refreshments will be provided.

This hybrid LWB program will be presented in person in the Library's auditorium and broadcast online simultaneously.

This program will be available to watch live on Facebook Live, on YouTube, and on the OCPL website's LWB Livestream page.

RECOMMENDED READING: Only Plane in the Sky: An Oral History of 9/11 by Garrett M. Graff (Avid Reader Press, an imprint of Simon & Schuster, Inc., 2019) [ Reserve a copy from the Library  |  Reserve copy of the ebook or audiobook through WVDeli/Libby ] 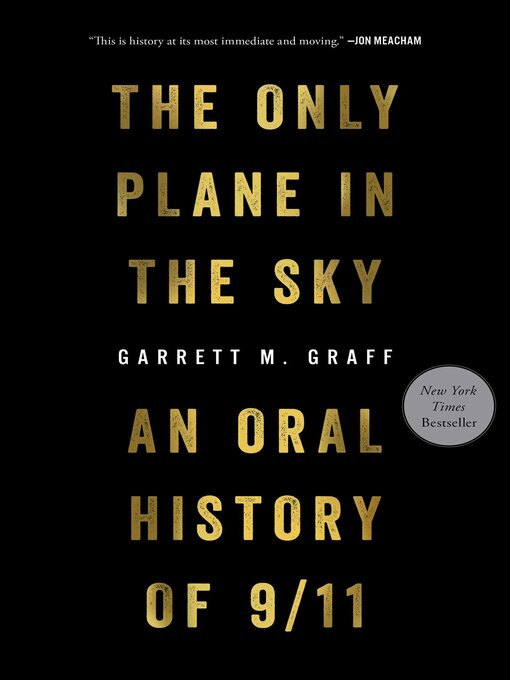 Over the past twenty years, monumental literature has been published about 9/11, from Lawrence Wright's The Looming Tower, which traced the rise of al-Qaeda, to The 9/11 Commission Report, the government's definitive factual retrospective of the attacks. But one perspective has been missing up to this point—a 360-degree account of the day told through the voices of the people who experienced it.

Now, in The Only Plane in the Sky, award-winning journalist and bestselling historian Garrett Graff tells the story of the day as it was lived—in the words of those who lived it. Drawing on never-before-published transcripts, recently declassified documents, original interviews, and oral histories from nearly five hundred government officials, first responders, witnesses, survivors, friends, and family members, Graff paints the most vivid and human portrait of the September 11 attacks yet.

Beginning in the predawn hours of airports in the Northeast, we meet the ticket agents who unknowingly usher terrorists onto their flights, and the flight attendants inside the hijacked planes. In New York City, first responders confront a scene of unimaginable horror at the Twin Towers. From a secret bunker underneath the White House, officials watch for incoming planes on radar. Aboard the small number of unarmed fighter jets in the air, pilots make a pact to fly into a hijacked airliner if necessary to bring it down. In the skies above Pennsylvania, civilians aboard United Flight 93 make the ultimate sacrifice in their place. Then, as the day moves forward and flights are grounded nationwide, Air Force One circles the country alone, its passengers isolated and afraid.

More than simply a collection of eyewitness testimonies, The Only Plane in the Sky is the historic narrative of how ordinary people grappled with extraordinary events in real time: the father and son working in the North Tower, caught on different ends of the impact zone; the firefighter searching for his wife who works at the World Trade Center; the operator of in-flight telephone calls who promises to share a passenger's last words with his family; the beloved FDNY chaplain who bravely performs last rites for the dying, losing his own life when the Towers collapse; and the generals at the Pentagon who break down and weep when they are barred from rushing into the burning building to try to rescue their colleagues.

At once a powerful tribute to the courage of everyday Americans and an essential addition to the literature of 9/11, The Only Plane in the Sky weaves together the unforgettable personal experiences of the men and women who found themselves caught at the center of an unprecedented human drama. The result is a unique, profound, and searing exploration of humanity on a day that changed the course of history, and all of our lives.

This special edition of Lunch With Books starts at 12:30 pm in the Library auditorium.
The livestream video will also start at 12:30 pm on Facebook and YouTube.