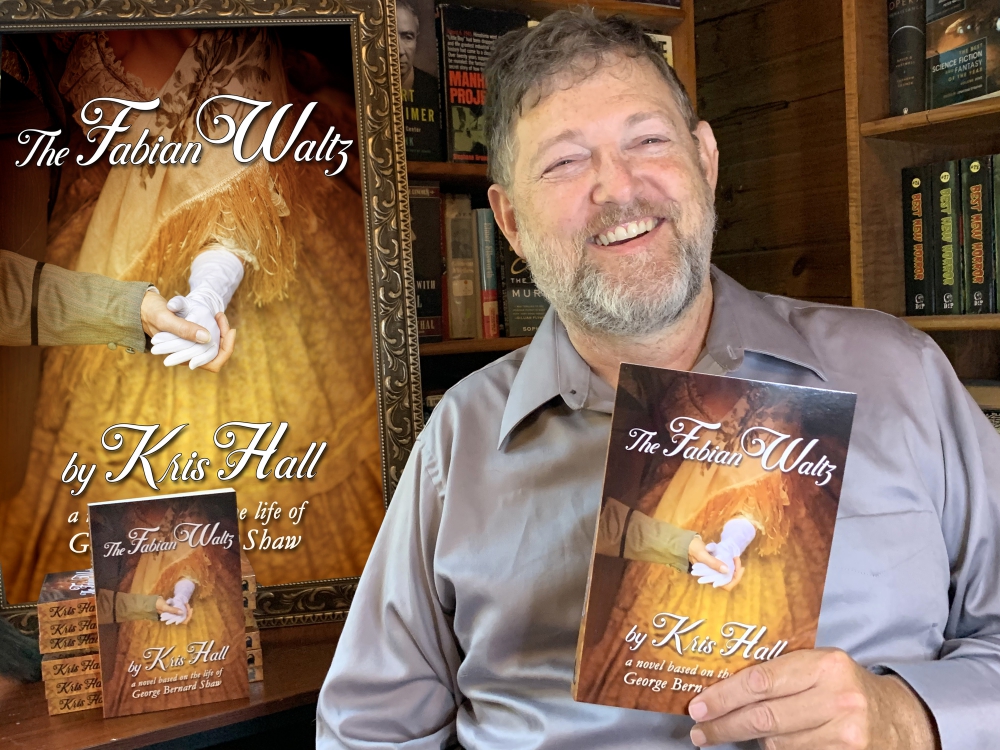 Kris Hall is the author of “The Fabian Waltz,” a witty romance in which playwright George Bernard Shaw's life and work are upended by a challenging woman he cannot win. Shaw and his fellow Fabians, including Oscar Wilde, fight for social justice and discover love along the way. Kris Hall earned his playwriting Master’s at Rutgers University, studying under Roger Cornish, an expert on British theatre.

While living in New York, Kris met his future wife at a reading of “The Fabian Waltz.” The bold, feminist beliefs of the Victorian characters intrigued Kim and she asked to meet the author. They’ve been together ever since.

Kris and Kim have two grown girls: Wyatt and Kally. They enjoy a hobby farm in West Virginia, with many animals. Inky the cat is Kris’ faithful writing companion.

Tuesday  |  2022 at noon
LWB LIVESTREAM: Program to be announced 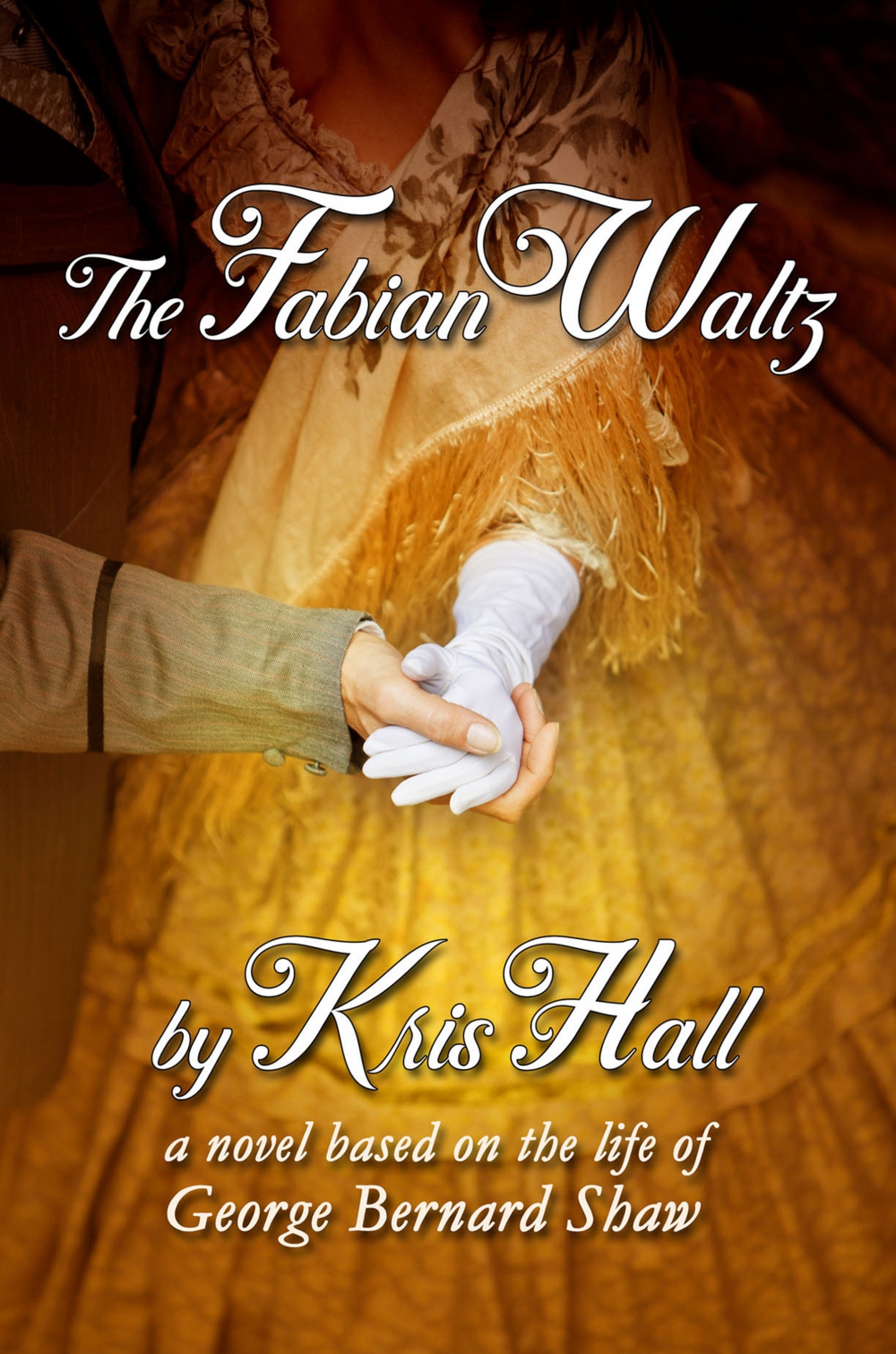 What if two of the great creative minds of the Victorian era found themselves crossing paths in London’s theater scene and in the call for progressive change in England? The answer can be found in “The Fabian Waltz”, a novel by West Virginia author Kris Hall.

In a starred review Kirkus Reviews called Hall’s book: “A sparkling re-creation of Britain’s literary and political avant-garde.” This witty Victorian romance shows how British playwright and political activist George Bernard Shaw's life and work are upended by a challenging woman he cannot win. Along the way, readers learn how Shaw and his fellow Fabian Society friends fight for social justice and discover love, while sharing their story with Oscar Wilde. This Victorian romance is based on real-life characters whose ideas are relevant today – more than a century later.

“George Bernard Shaw is second to Shakespeare as the greatest writer of the English language,” Hall said. “Shaw won both a Nobel Prize in Literature and an Academy Award for Best Screenplay for adapting Pygmalion for the screen. Pygmalion later became the beloved musical ‘My Fair Lady.’”

Born in Dublin, Ireland, in 1856, Shaw first made his mark on the London scene as a theater critic. He was appalled at the poor quality of British drama, which he regarded as silly melodramas that ignored all moral and social issues of the day.

“Shaw approached social commentary with a sense of humor,” Hall said. “His play Major Barbara asks who can best help the poor: a Salvation Army major who gives them charity, or her father, ruthless arms merchant who gives the poor good jobs, good living conditions and a future. His play Pygmalion suggests the biggest difference between a high society lady and a poor flower seller was her accent, and that changing the accent could change a person’s social class.”

While doing extensive research for the book, Hall discovered that Oscar Wilde was a contemporary of Shaw. Even though they were leading members of London’s theater scene in the 1890s, their paths did not often cross because, according to Shaw, they were uncomfortable around each other.

“Wilde was the greatest wit of his generation and I wondered what conversations between the two would have been like,” said Hall. “I thought that even if they never matched wits in real life, they could do so in conversations I would write.”

The centerpiece of the novel is the romance between Shaw and Charlotte Payne-Townsend, the woman he married at age forty. Hall enhanced the political and romantic themes by including the real-life story of Shaw’s friends, Sidney and Beatrice Webb. Wilde serves as an observer of the Fabian romances, while he must deal with difficulties caused by his gay lover, Bosie Douglas.

“Beatrice was an extraordinary upper class woman who devoted her life to helping the poor,” Hall said. “She disguised herself as a seamstress to investigate the working conditions in London’s sweat shops. Sidney was an unsexy Cockney intellectual who rose to prominence through hard work and his ability to be a thought leader of the Fabian Society.”

The Fabian Society is committed to progressive social change today and it is affiliated with England’s Labour Party. The main characters in the book founded The London School of Economicsand Political Science and New Statesman magazine,which exist today.

Hall wrote this story thirty years ago as a play, winning several honors including a Playwrights First reading and being selected as a runner-up in the 1996 National Play Award Playwriting Competition, sponsored by the National Repertory Theatre Foundation. He adapted the play into a movie script.

In 2011, Hall was diagnosed with Burkitt’s lymphoma. “Eight months of intense chemotherapy made me reevaluate my life. I decided what was missing was a greater commitment to my writing,” he said. “I took my play and screenplay and used them as a basis for this novel.”

Hall’s wife, Kim Harbour, created a dozen black and white illustrations for the novel and designed the trade paperback and eBook editions. The book is available on Amazon, Barnes & Noble and other online sources. Additionally, a 20% discount code is available from the website: www.fabianwaltz.com. The couple is working with Huntington theatre director Helen Freeman and local actors to do a reading of the play and to videotape a few selected scenes.

Hall earned a playwriting Master’s at Rutgers University, studying under Roger Cornish, an expert on British theatre.While living in New York, Hall and Harbour met at a reading of The Fabian Waltz. The feminist beliefs of the Victorian characters intrigued Harbour and she asked to meet the author. They’ve been together ever since.

Hall is a special education teacher for Putnam County. He and Kim have two grown girls. They enjoy a hobby farm in Hurricane, W.Va., with many animals.