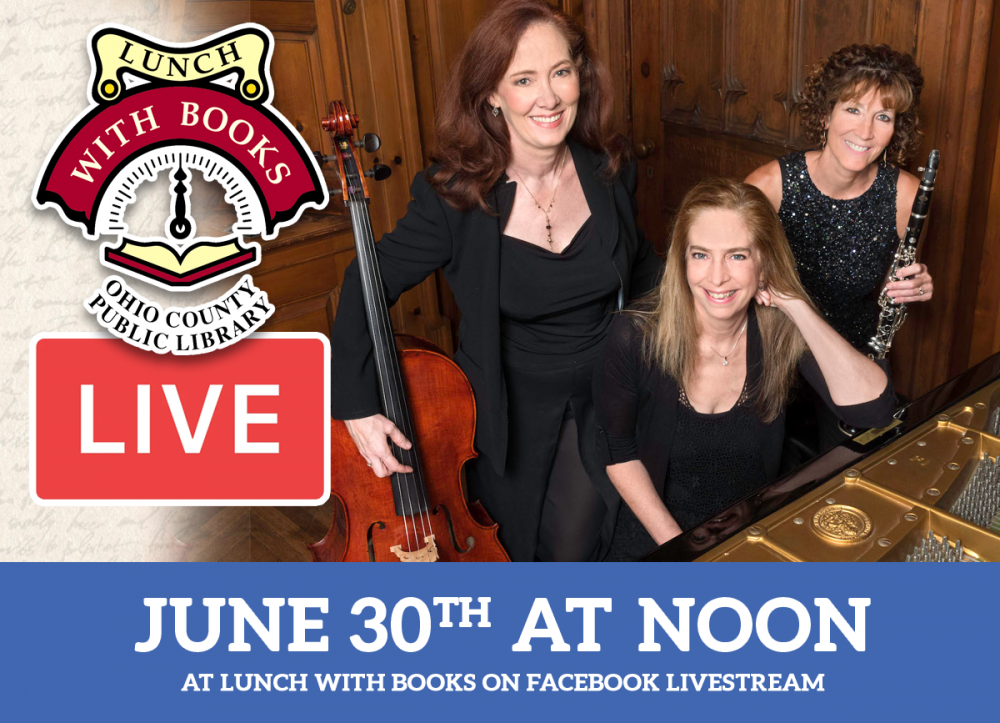 Nocturne for Piano, Clarinet and Cello, Op 75 by Fredrich Wilhelm Voigt (1833-1894)
In the 19th century the nocturne evolved into a single-movement piece that evoked quiet night time sounds or was simply music played for evening time The first nocturnes to be written under the specific title were by the Irish composer John Field, generally viewed as the father of the Romantic nocturne that characteristically features a cantabile (singing) melody over a broken chord or arpeggiated accompaniment. This Nocturne was selected for these qualities as it evokes thoughts, visions, and sentiments that can be used to stir the creative awakenings for our poets.

Trio for Piano, Clarinet and Cello, Op. 52 by Robert Schultz (b. 1948)
The Trio Op. 52 by Robert Schultz, commissioned by the Zaffiro Trio was premiered in Pittsburgh in 2019. Robert will speak about the piece, and we will present the second movement. The second movement, titled “Restrained”, begins quietly with a simple motive in the piano that becomes the primary material used and developed throughout the movement. With the patterned motive pulsing quietly in the background the clarinet and cello enter with an expressive unison melody and now the primary elements of the movement have been introduced. The instruments trade roles and appear in different combinations throughout, as rich harmonic treatments are applied to the texture and the intensity grows and recedes. The opening theme returns to quietly bring the movement to a close.

Concertpiece No. 2 Op. 114 (1833) by Felix Mendelssohn (1809-1847)
Zaffiro plays this work originally written for two Basset Horns. Mary Beth will talk about the piece and how she uses it in her own teaching methods.

Mendelssohn made an arrangement of Beethoven’s String Quartet in F, Op. 18, No. 1 for two clarinets, basset horn, and bassoon for a musical party at the Bärmanns, and it succeeded so well that he was inspired to write two original Concertpieces for clarinet, basset horn, and piano for Heinrich Sr. and Carl the next year, published posthumously as Op. 113 (F minor) and Op. 114 (D minor). Both works are disposed in three movements (fast-slow-fast) and require a masterly technique that serves as testimony to the highly developed skills of the Bärmanns. The opening Presto of the Concertpiece No. 2 is the most dramatic movement in either work; the Andante is animated by an incessant, wide-ranging broken-chord accompaniment; and the closing movement is a scintillating showpiece for the paired clarinets.

ZAFFIRO TRIO joins together superb artistry of musicians Tina Faigen (piano), Mary Beth Malek (clarinet), and Paula Tuttle (cello). All three are faculty members at University of Pittsburgh teaching in the Music Department and appearing as chamber musicians and soloists at Bellefield Hall, Frick Fine Arts Auditorium, and Campana Hall on the Greensburg Campus, and each have appeared as concerto soloist with the University of Pittsburgh Symphony Orchestra. The Zaffiro combination of instruments provides the audience the opportunity to hear beloved works of the great masters, such as Brahms and Beethoven that are rarely heard in concert as well as commissioned works. Together these three founding members of Zaffiro Trio bring a unique quality of sound, expertise, and sensitivity to their ensemble that audiences adore.

Tina Faigen, concert pianist, recording artist, teacher,  and published music-writer, holds a Bachelor of Music degree from Oberlin College and both Master and Doctorate degrees from the University of Miami where she studied with renowned pianist Ivan Davis. A recipient of many prizes and awards, some highlights include the Pittsburgh “Y” Recital Series, over 30 performances of the Tchaikovsky 3rd Piano Concerto with Edward Villella’s Miami City Ballet, and a debut tour of Italy with Orchestra Sinfonica Abruzzeze. Faigen’s CD recordings of Robert Schultz’s works “Visions of Dunbar” and “Tina Faigen Plays Piano Transcriptions” have received rave reviews. An active chamber musician, she performs regularly with Zaffirro Trio, of which she is a founding member. Faigen is co-author of the acclaimed Accelerando Piano Technique Series, along with numerous other editions of educational piano music. Faigen has maintained an active teaching studio since the age of 14. She is on the piano faculty at University of Pittsburgh as well as at Carnegie Mellon University Music Preparatory School. Also a violinist, Faigen serves as Principal 2nd for the Edgewood Symphony Orchestra.

Mary Beth Malek, principal clarinetist for the Pittsburgh Opera and Ballet Orchestras, has also held the principal clarinet chair in the Wheeling Symphony and Westmoreland Symphony Orchestra. She performs with Pittsburgh Civic Light Opera and Pittsburgh Festival Opera. Collaborating with pianist, Tom Roberts, she accompanies silent Charlie Chaplin films with original music. Mary Beth is on the faculty of the University of Pittsburgh and maintains a studio at home where her high school students are consistently selected for the  PMEA State Band. Educated at Northwestern University and the Eastman School of Music, Mary Beth also received a Performer’s Certificate from Eastman and was awarded a Fulbright Scholarship to study in Vienna, Austria.

Cellist Paula Tuttle has traveled and performed throughout the US, Europe, and the Far East as an orchestral musician, soloist, and chamber music artist. She played as principal cello for the internationally renowned Spoleto Festival in Charleston, SC, and the Festival of the Two Worlds in Spoleto, Italy. She presented numerous recitals in France during three summers at the Acadamie Franco-Americaine in Vaison-la-Romaine, Provence. She has been active as soloist and recitalist in the Western Pennsylvania, recently performing concertos with Butler Symphony, Edgewood Symphony Orchestra, I Solisti di Oakland, University of Pittsburgh Symphony, Pittsburgh Festival Orchestra and Slippery Rock University Orchestra. A member of the Pittsburgh Opera and Ballet Orchestras, performing as assistant principal, she also plays solo cello with PBS's MyMusic Orchestra, Latshaw Pops Orchestra, and has recorded extensively with both groups.

Composer Robert Schultz is one of America’s most published and prolific writers with more than 3,000 original compositions, transcriptions, and arrangements published by many of America’s top publishing houses. Schultz’s output includes original orchestral works, chamber music, works for solo instruments, vocal music, and a substantial library of published and recorded piano works.

Schultz held the position of Senior Keyboard Editor and featured piano writer for Columbia Pictures Publications in Miami, Florida from 1980-1989. In 1990 he left that position to devote his full time to composing and arranging from his studio. In 2008 Schultz and his wife, pianist Tina Faigen, moved to Pittsburgh, bringing their publishing, writing, teaching, and performing activities back to the region where both had grown up. Schultz’s catalog continues to grow with commissions and premieres of new chamber music, works for orchestra, vocal and choral music and new additions to The Robert Schultz Piano Library. Information about Schultz and his library of works is available at the website https://schultzmusic.com.