LUNCH WITH BOOKS: "We Were Legends in Our Own Minds" with Richard Cobb and Carter Taylor Seaton 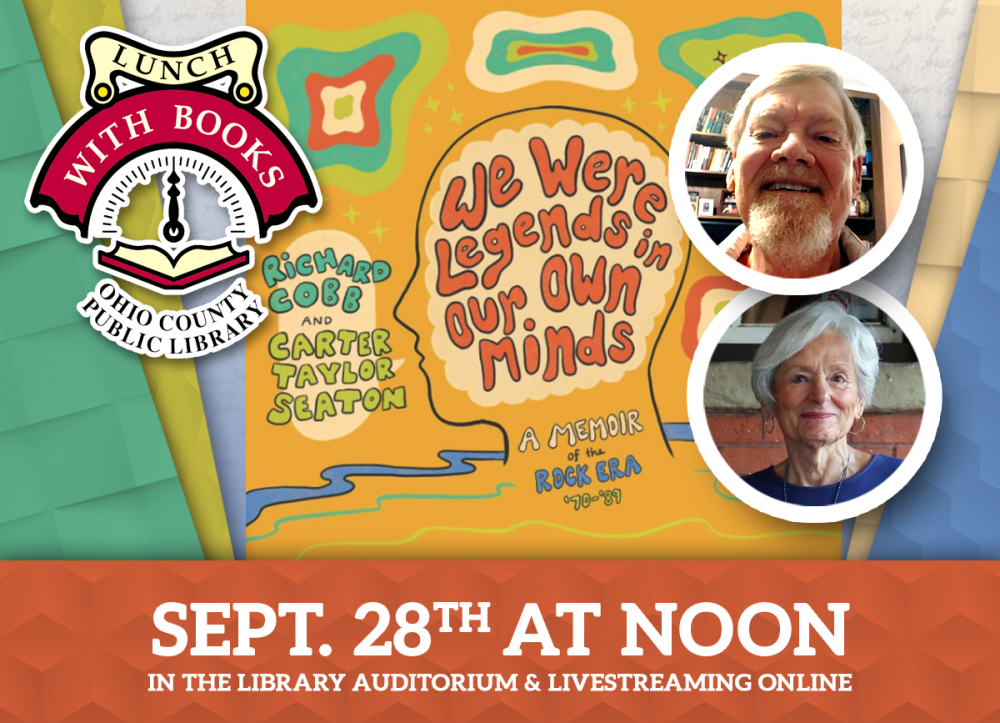 From Aerosmith to ZZ Top, Richard Cobb saw them all during his twenty-five-year career managing mid-market arenas where they played. He tells stories about eating Fig Newtons with Elvis on his private airplane, about his struggle to get Sly Stone on and off the stage, and about his battles with protesting conservative Christians who hoped to scuttle a scheduled performance by Ozzy Osbourne. We Were Legends in Our Own Minds is a backstage pass to all these musical adventures and more.

Tuesday: September 28 at noon
LWB LIVESTREAM: We Were Legends in Our Own Minds with Richard Cobb and Carter Taylor Seaton

PRESENTER BIO: After serving as the CEO of various sports arenas/convention centers/exhibit facilities/performing arts centers in WV, PA, IN, GA, ME, and TN, Richard Cobb retired in 1991.

Carter Taylor Seaton is a freelance journalist and figurative sculptor. Born and raised in West Virginia, she graduated from Marshall University and lived in Columbus and Atlanta, Georgia from 1985-1995 before returning to her hometown of Huntington where she resides with her husband, Richard Cobb. While living in Georgia, she began running and completed several marathons after she was fifty, including the Atlanta, Marine Corps, and New York City Marathons. For fifteen years, she directed a rural Appalachian craft cooperative to benefit low-income women. Ladies Home Journal nominated her in 1975 for its "Woman of the Year" award.

Her first novel, Father's Troubles, was named as a finalist for the prestigious ForeWord Magazine 2003 Book of the Year award in the Historical Fiction category. She is a regular contributor to several regional magazines and The West Virginia Encyclopedia. In 2007, her article on the impact of the back-to-the-land movement on West Virginia was featured in Appalachian Heritage literary journal and won the Denny C. Plattner Award for its Best Work of Non-Fiction.

Her third book, Hippie Homesteaders: Arts, Crafts, Music and Living on the Land in West Virginia, was released by West Virginia University Press in 2014. It is an account of the lives of forty-five artisans, musicians, and performers who came to the state during the back-to-the-land movement of the 1960s and 1970s and it explores the reasons why. Hippie Homesteaders was named a category finalist by ForeWord Indie Reviews.

Seaton's biography of the late US Congressman - Ken Hechler, (D) West Virginia, titled The Rebel in the Red Jeep, was published by West Virginia University Press in 2017. It was chosen as a finalist for the Weatherford Award, as a category finalist in Biography by ForeWord Indie Reviews, and won the Ella Dickey Literary Award in 2018.

FEATURED BOOK: We Were Legends in Our Own Minds: a memoir of the rock era, '70-'89, by Richard Cobb and Carter Taylor Seaton (Mountain State Press, 2020)
[ Reserve a copy from the Library  |  Purchase a copy online through Mountain State Press or Amazon ] 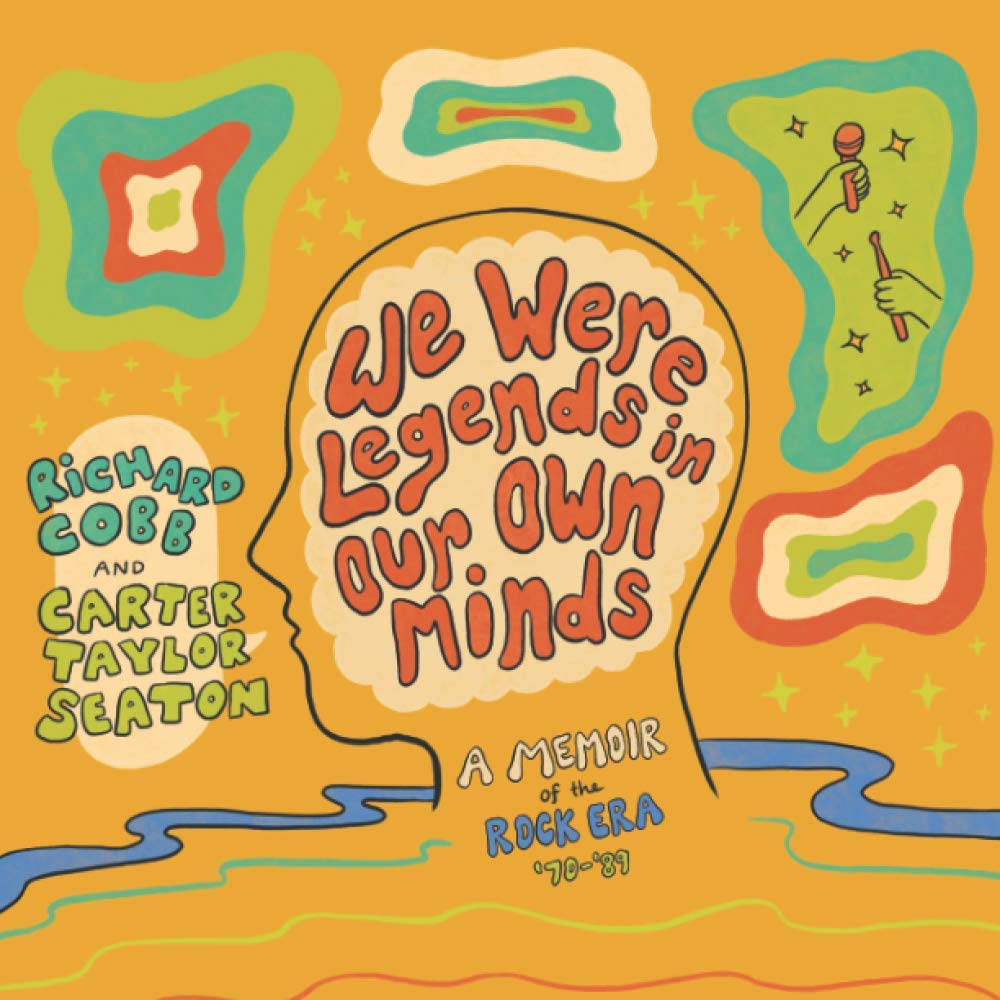 REVIEWS:
“Everyone knows the Fillmore, the Whiskey, CBGB.  Fewer people know the stories of the smaller venues, the local halls, the civic centers along the Great American Highway where live shows brought rock to the masses, and public figures came to stump and speechify. Few knew what it took behind the scenes to get the job done. We Were Legends in Our Own Minds is a distinctive addition to pop culture memoir, a boots-on-the-ground account of a solid quarter-century of who came to town, who trashed the hall, who got the crowd on its feet, and how much sweat and prep were required to make it all happen. By turns dishy, trashy, funny, and deeply serious, it’s never sentimental, and always frank. A true backstage pass.” —Eric Waggoner, Magnet Magazine

“In his years as director of civic and convention centers from Maine to Georgia during the rock era, Richard Cobb saw it all.  He managed highly temperamental, even downright crazy rock stars who threw fits when they didn’t have their way. He managed to work in arenas so thick with marijuana smoke and noise the music was merely incidental. There were the good times – Fig Newtons with Elvis Presley in Charleston WV – and the bad times such as when Ozzy Osbourne appeared in Huntington WV and swore he wouldn’t swear on stage in this buckle of the Bible-belt. He didn’t keep his promise. If you’re a fan of the wild rock years, this book from this husband-&-wife team is for you.” —Dave Peyton, former reviewer of The Herald-Dispatch

“Sometimes the show in the business office is more entertaining than the one on stage. You’ll find that out when you read We Were Legends in Our Own Minds, a colorful book by Richard Cobb and Carter Taylor Seaton that covers Cobb’s decades in the concert business. Times were crazy. He booked Elvis. He presented Lawrence Welk. He put on shows for longhaired rockers and stuffy politicians. Then there was a show in Georgia that never happened…” — Richard Hyatt, author of The Carters of Plains

➤ View all books by Carter Taylor Seaton available at the Library