Back by popular demand is the Lunch With Books second annual Simple Life Christmas Special with Don Feenerty. Last year’s online broadcast of “The Simple Life a Foxfire Christmas" broke Library online attendance records with viewers from as far away as Ireland.

Feenerty’s unique view on life, that he calls the Simple Life is an easy to follow and enjoyable philosophy based on contentment and making do with what you have. Feenerty, a life long Ohio Valley resident grew up in South Wheeling and now lives on a farm in rural Belmont County, Ohio where he claims the simple spirit of Appalachia is what rules his daily life.

Feenerty has spent his entire adult life working as a creative. For over thirty-five years he owned and operated a successful commercial photography business but is equally known for his creative writing and story telling. Feenerty promises to share with guests a recent story that he wrote for the show, titled “The Christmas Ghost of Hart Road” a story seventy years in the making. Feenerty claims, “with all my stories there is a little bit of truth mixed in with a lot of fiction.” “It’s the job of the listener to decide what parts are true,” Feenerty added.

The show will also showcase simple and memorable gifts from Feenerty’s life and gifts you can make yourself. He will also dedicate part of the show to making the most of what you have in a demonstration on how to take one simple worn out item and create many memorable family heirlooms, gifts to last a lifetime.

Featured throughout the show will be performances by Feenerty’s musical friends, Farie May, who will be playing traditional holiday music in their old time style. The show will conclude with vocal artist, Jariel Henthorn singing Ave Maria in Latin, accompanied by Zac Gordon on the violin.

Ohio County Public Library program director, Sean Duffy said, “This is a must see show. Don Feenerty and his Simple Life philosophy has something to touch the heart of everyone.”

PRESENTER BIO: Don Feenery claims, while growing up in South Wheeling his life was changed for the better by books. In fourth grade his teacher had him read “My Side of the Mountain” and at the age of twelve, he got his hands on his first “Foxfire” book. Living between the base of the West Virginia hills and the bank of the Ohio River in semi-rural Appalachia the stories in these books rang true and spoke volumes to young Feenerty.

Today he lives on a farm outside of Mt. Pleasant and spends much of his time living what he calls the Simple Life. He enjoys foraging for wild greens and mushrooms, hunting for antlers and arrowheads and making his own, everything. “In rural communities throughout Appalachia people did for themselves. They grew their own food, made their own tools and found entertainment in the simple things life had to offer,” says Feenerty. “And that’s what I like to do in my life.”

Faire May, the Wheeling-based folk music duo founded by friends Jariel Henthorn and Zac Gordon, who use a variety of well-known acoustic instruments to keep the traditions of Ireland, Scotland, Wales, England, and the Americas alive and growing, will provide musical entertainment throughout the presentation. 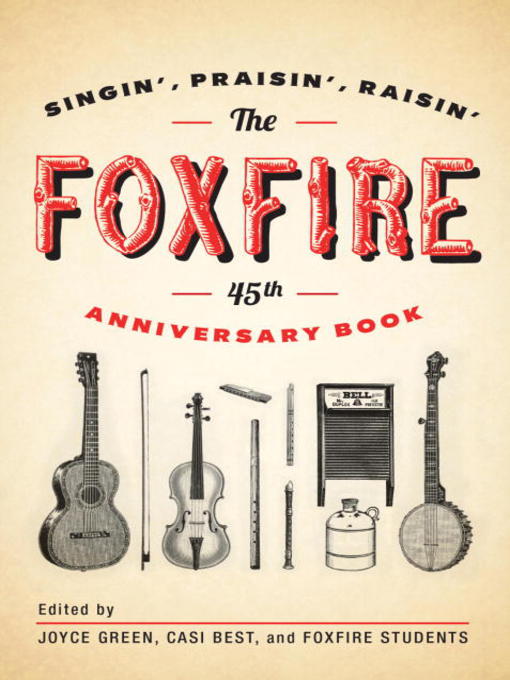 ABOUT THE FOXFIRE SERIES: Eliot Wigginton, an English teacher at the Rabun Gap Nacoochee School in Georgia (and the son of Wheeling landscape architect Brooks Edward Wigginton), began a writing project based on his students' collecting oral histories from local residents and writing them up. The histories and articles were published in a small magazine format beginning in 1966 with topics covering all manner of folklife practices and customs associated with farming and the rural life of southern Appalachia, as well as the folklore and oral history of local residents. Named Foxfire after a local phosphorescent lichen, the magazine became one of the most beloved publications in American culture. The first anthology of collected Foxfire articles was published in book form in 1972 and was a surprise bestseller that brought Appalachia’s philosophy of simple living to hundreds of thousands of readers. Since the first volume was published, the Foxfire books have brought the philosophy and wisdom of the mountains to millions, teaching creative self-sufficiency and preserving the stories, crafts, and customs of Southern Appalachia. Inspiring and practical, this classic series has become an American institution.