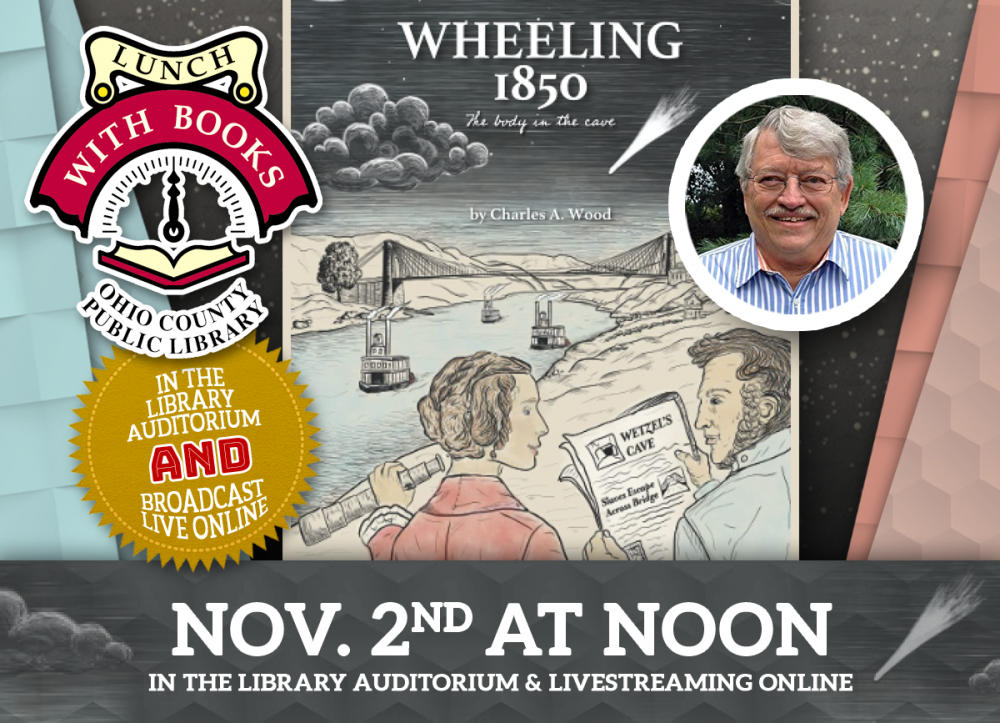 Wheeling scientist Chuck Wood has published 5 prior books, all about volcanoes, impact craters, and the Moon for professional and lay readers. Now he reports on the far more difficult task of writing a novel, where nominally all content is free to be invented. Writing about antebellum Wheeling led to many delightful hours searching in the Wheeling Room and reading old books about local and national history, and the culture and astronomy of the time. Come learn how Zane College, Wetzel's Cave, the Washington Female Academy, horse prints, riverboat racing and gambling, Rebbeca Harding, 653 Main St, and plaster of Paris fit into perhaps the world's first astronomical murder mystery. It may be the last.

Chuck Wood and his wife live in the oldest dated house in Wheeling, WV. Researching their home’s history led to learning the history of the town and region, and the decision to capture it in a novel, Wheeling 1850. Chuck’s life is dominated by the space age, working for NASA to research moons and planets, asteroids, comets and meteorites. Thus, it was natural to use this fascination with astronomy – notice the books about the Moon, impact craters and volcanoes? - to make the protagonists of the 1850 book be astronomers and to accurately portray the telescopes and astronomical understanding of that antebellum time.

(Please Note: Anne Madarasz’s presentation, “From the Everyday to the Extraordinary: Pittsburgh Glass at the Heinz History Center” originally scheduled for Tuesday, Nov. 2, has been cancelled due to medical issues.)

PRESENTER BIO: Charles "Chuck" A. Wood received his PhD in Planetary Geology in 1979 from Brown University. From 1980-1985, he was a Space Scientist at NASA Johnson Space Center in the Planetary Science Branch. Over 1985-1990, he was Chief of the Space Shuttle Earth Observations Office at NASA JSC. Over 1990-2000, he was Chair of the Department of Space Studies at the University of Arizona, where he was Chester Fritz Distinguished Professor and Director of the North Dakota Space Grant and NASA EPSCoR programs. Over 2001-2003, he was Director of Education of the Biosphere 2 under operation by Columbia University. In 2004 he joined the Planetary Science Institute as a Senior Scientist and in parallel became the Executive Director of the Center for Educational Technologies at Wheeling Jesuit University. He is the owner of the Vigilant Bookstore on Market Street in Wheeling.

FEATURED BOOK: Wheeling 1850, by Charles A. Wood (Independently published, September 17, 2021)
[ Reserve a copy from the Library (coming soon - on order)  |  Purchase a copy from Amazon or, better yet,  stop by Chuck's bookstore, Vigilant Books, at 1900 Market St. in Wheeling and support a local bookstore! ]

The 1850s are a time of dramatic changes in the United States. The nation's land area rapidly expands due to wars and gold, tensions accelerate over slavery and new states, women begin their struggles to be more than helpmates, and new technologies are redefining American life. Wheeling, Virginia is a center for many of these transformations, being a national leader in glass, iron, riverboat and tobacco production, a major transportation hub for pioneers migrating west, a stop on slave caravans and on the Underground Railroad, and a town with educated women wanting to live their dreams.

One morning, the body of a steamboat captain is discovered in an Indian cave. The mayor recruits Zane University astronomy professor Henry Russell to find out who murdered the captain. Athena, Henry’s brilliant and beautiful 20-year-old daughter, insists on joining the investigation. The Russells strive to understand the universe, but as they investigate the murder they learn more than they want about the secrets of fellow citizens.

Despite their scientific approach and new methods of detection the Russells struggle to identify the killer, while maintaining their teaching and research at the university. And their lives are endangered during a dark night return from the observatory when they are threatened if they continue their murder investigations. Horse and steamboat racing, grave-robbing, escaping slaves, emerging rights for women, cholera outbreaks, romance, and Ralph Waldo Emerson bring the tale from death to life. But who killed the captain, and can Henry and Athena protect each other?