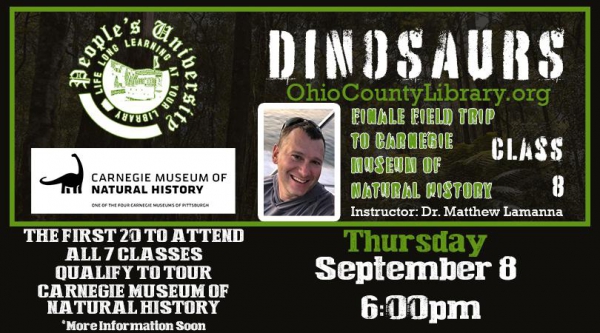 The first 20 participants to attend all 7 classes will get a behind the scenes look at the “Dinosaurs in Their Time” exhibition at the Carnegie Museum of Natural History in Pittsburgh (we will draw names if more than 20 qualify). Those interested will be responsible for their own transportation to and from the museum, where we will meet at 6 p.m. for the tour. It will last about 1 hour. This exhibition is home to dozens of real, original fossils displayed in scientifically accurate reconstructions of their ancient habitats.

NOTE: ATTENDEES WILL BE RESPONSIBLE FOR THEIR OWN TRANSPORTATION TO AND FROM THE CARNEGIE MUSEUM.

INSTRUCTOR (Guide): DR. MATTHEW C. LAMANNA is the Mary R. Dawson Associate Curator of Vertebrate Paleontology and the principal dinosaur researcher at Carnegie Museum of Natural History in Pittsburgh. He received his B.Sc. from Hobart College and his M.Sc. and Ph.D. from the University of Pennsylvania. He has directed or co-directed field expeditions to Antarctica, Argentina, Australia, China, Croatia, Egypt, and Greenland that have resulted in the discovery of numerous new species of dinosaurs and other animals from the Cretaceous Period. Lamanna served as chief scientific advisor to Carnegie Museum’s $36M Dinosaurs in Their Time exhibition and has appeared on television programs for PBS (NOVA), Discovery Channel, History Channel, A&E, the Science Channel, and more. 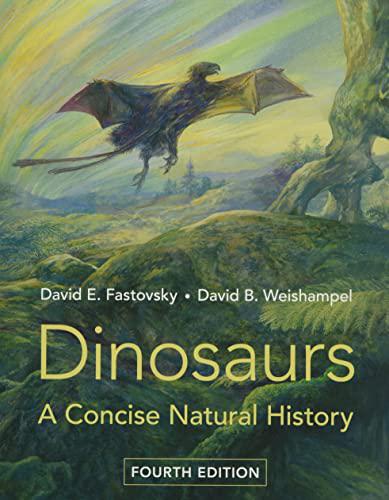 The ideal textbook for non-science majors, this lively and engaging introduction encourages students to ask questions, assess data critically and think like a scientist. Building on the success of previous editions, Dinosaurs has been thoroughly updated to include new discoveries in the field, such as the toothed bird specimens found in China and recent discoveries of dinosaur soft anatomy. Illustrations by leading paleontological illustrator John Sibbick and new, carefully-chosen photographs, clearly show how dinosaurs looked, lived and their role in Earth history. Making science accessible and relevant through clear explanations and extensive illustrations, thetext guides students through the dinosaur groups, emphasizing scientific concepts rather than presenting endless facts. Grounded in the common language of modern evolutionary biology – phylogenetic systematics – students learn to think about dinosaurs the way that professional paleontologists do.