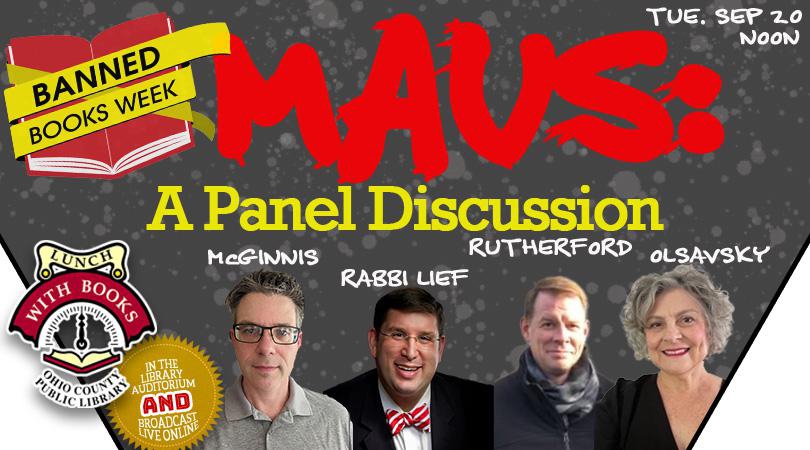 Launched in 1982 in response to a sudden surge in the number of challenges to books in schools, bookstores, and libraries, "Banned Books Week" is an annual event celebrating the freedom to read. According to bannedbooksweek.org, It highlights the value of free and open access to information by bringing together the entire book community — librarians, booksellers, publishers, journalists, teachers, and readers of all types — in shared support of the freedom to seek and to express ideas, even those some consider unorthodox or unpopular.
Banned Books Week 2022 will be held nationally from September 18 – 24. The theme of this year’s event is “Books Unite Us. Censorship Divides Us.” The American Library Association (ALA) Office for Intellectual Freedom (OIF) compiles lists of challenged books as reported in the media and submitted by librarians and teachers across the country. In January 2022, a Tennessee school board infamously banned "Maus," a graphic novel about the Holocaust, ostensibly because it contains "inappropriate curse words" and nudity.

For Banned Books Week 2022, on September 20 at its Tuesday Lunch With Books program, the Ohio County Public Library in Wheeling will host a panel discussion of Art Spiegelman's Pulitzer-Prize winning "Maus" (1986) and its sequel, "Maus II" (1991). The author's parents were survivors of the Auschwitz concentration camp. In the book, Jews are depicted as mice (thus the title) and Nazis as cats.

The Library will also launch a new graphic novel discussion group on September 1 at 4 P.M. It will be headed by Reference Assistant Nayt Knapp, with a discussion of Maus on October 6. Participants will be encouraged to attend the September 20 panel discussion. The graphic novel group will continue in October and beyond with a new book and discussion each month thereafter.

PANEL BIO: Rabbi Joshua B. Lief is the Rabbi of historic Temple Shalom, the very same congregation where he grew up, here in Wheeling. He attended Princeton University and graduated with a degree in History. After Princeton, Rabbi Lief attended the Hebrew Union College-Jewish Institute of Religion. After living in Jerusalem for the first year of the seminary, he completed his studies at HUC-JIR's campus in Cincinnati, Ohio where he was ordained as a Rabbi in May of 2003. Just out of the seminary, Rabbi Lief served as the Rabbi of Mizpah Congregation in Chattanooga, Tennessee. He was called to be the Senior Rabbi of Congregation Ahavath Chesed, a large congregation in Jacksonville, Florida, where he served from 2008 until 2016. Rabbi Lief is inspired to serve as the Rabbi of Temple Shalom, enabling him to give back to the congregation and to the city. Having moved away for college, Rabbi Lief is proud to have returned so the next generation of the Lief family can grow up in this special place. Since returning to Wheeling, Rabbi Lief has been active in the city’s current revitalization efforts through support of the arts, business development, our parks, public education, and interfaith engagement. He is honored to serve on the boards of Wheeling Health Right, Congregations for Caring, the Impact Coalition, the Unity Center, Easter Seals, and the Wheeling Rotary Club. Rabbi Lief is honored to serve as a member of the Central Conference of American Rabbis’ Responsa Committee, helping to bring Jewish Law to bear on the challenges of our modern lives. He is also a Rotary Paul Harris Fellow, and a Life Member of the National Eagle Scout Association. Rabbi Lief is married to his beautiful wife Rebecca. They are delighted daily by their adorable daughters, Leah and Ellie, and are proud to make Wheeling their home.

Dr. Darin McGinnis is the 12th Grade English Language and Composition teacher at The Linsly School. Before taking his current post, he was a tenured Associate Professor at the former Wheeling Jesuit University and also had taught at schools in Atlanta and Chicago. An inveterate reader of Mad Magazine as a child, Dr. McGinnis has written extensively on interpretation and historicism.

Judi Olsavsky is the former English department head and AP English Language instructor at The Linsly School who has also taught writing and speech courses at a variety of colleges. Her Holocaust studies include a Classroom Without Borders trip to Poland, during which teachers visited concentration camps and other relevant sites, accompanied by Holocaust survivor Howard Chandler. Study at the Clarice Smith National Teaching Institute at the Smithsonian American Art Museum has contributed to her interest in using art in the classroom.