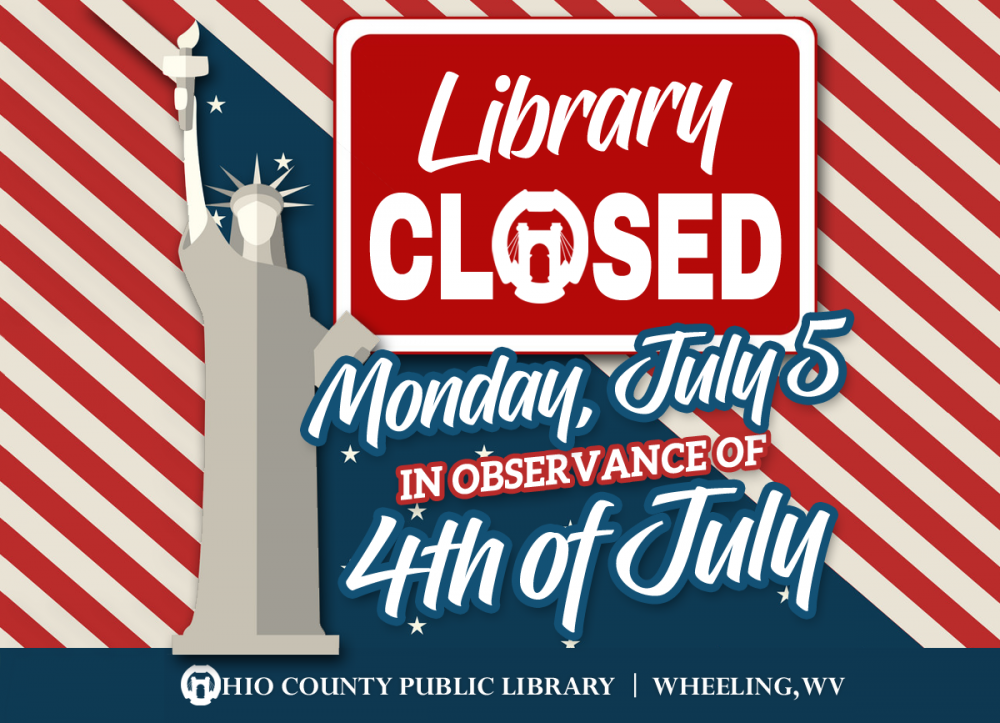 The Library will be closed Monday, July 5, 2021, in observance of Independence Day.

245 years ago, on July 4, 1776, the Second Continental Congress unanimously adopted the Declaration of Independence, announcing the colonies’ separation from Great Britain. Philadelphians marked the first anniversary of American independence with a spontaneous celebration, which is described in a letter by John Adams to his daughter, Abigail.

"My dear Daughter Philadelphia, July 5th, 1777 Yesterday, being the anniversary of American Independence, was celebrated here with a festivity and ceremony becoming the occasion. I am too old to delight in pretty descriptions, if I had a talent for them, otherwise a picture might be drawn, which would please the fancy of a Whig, at least. The thought of taking any notice of this day, was not conceived, until the second of this month, and it was not mentioned until the third."

4th of July celebrations in Wheeling 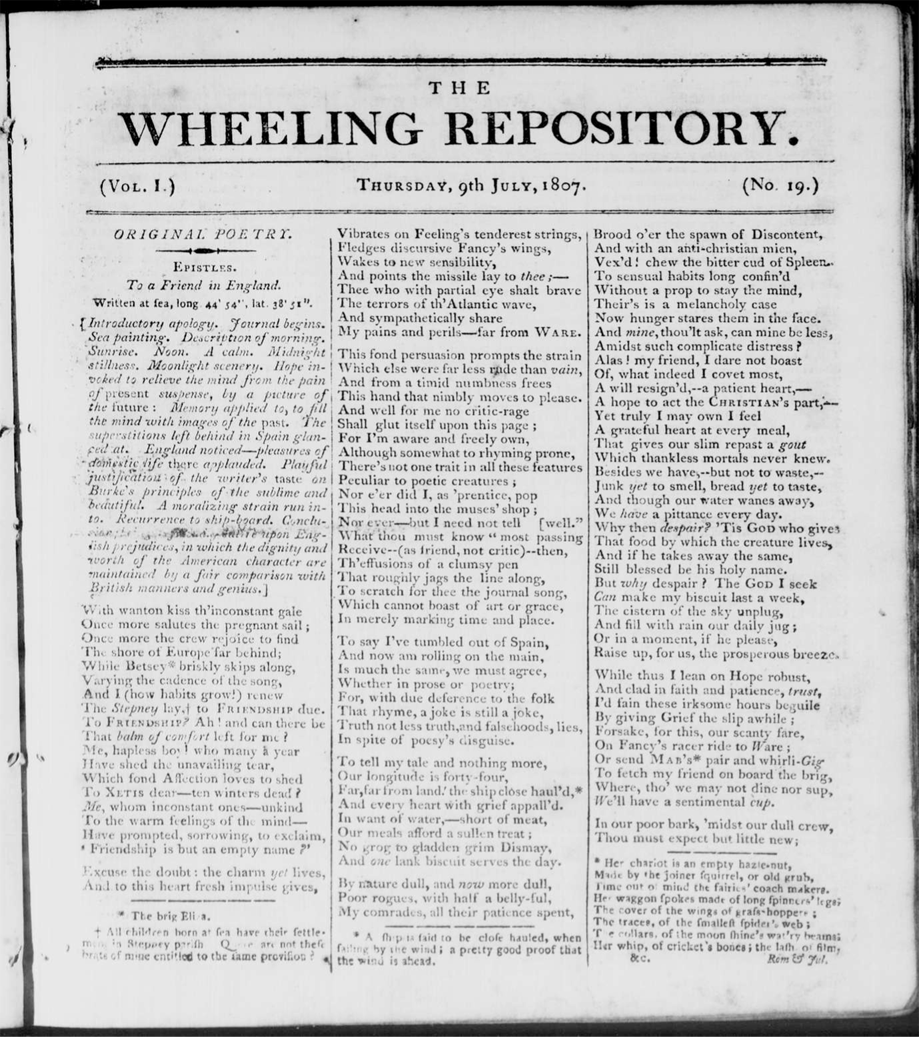 The earliest mention the Library has found of a 4th of July celebration in Wheeling dates to 1807 and was printed by Wheeling's first newspaper, the Wheeling Repository, which was only published between March 5, 1807 and November 5, 1808.

On the 4th inst. the Wheeling Lightinfantry company paraded, in order to celebrate the 31st anniversary of American Independence. A suitable repast was provided for the occasion, on the bank of the Ohio, where there were joined by several gentlemen of the Corporation... The day was spent with that conviviality and harmony which mark the character of genuine Republicans. (view the July 09, 1807 newspaper page on the Library of Congress's Chronicling America website to read the full article).

Observing Independence Day, however, only became commonplace across the United States after the War of 1812.

In his 1905 Reminiscences of his Schoolboy Days, then octogenarian Joseph Bell recollected that in the 1830s, when "The whole of Wheeling Island was then owned by the two Zanes" and "There being no bridges over the Ohio, alI crossing was done by ford or ferry," that "Fourth of July public dinners and celebrations were commonly held on the eastern bank of the Island, just north of [then the yet to be built ] terminus of the Suspension Bridge." 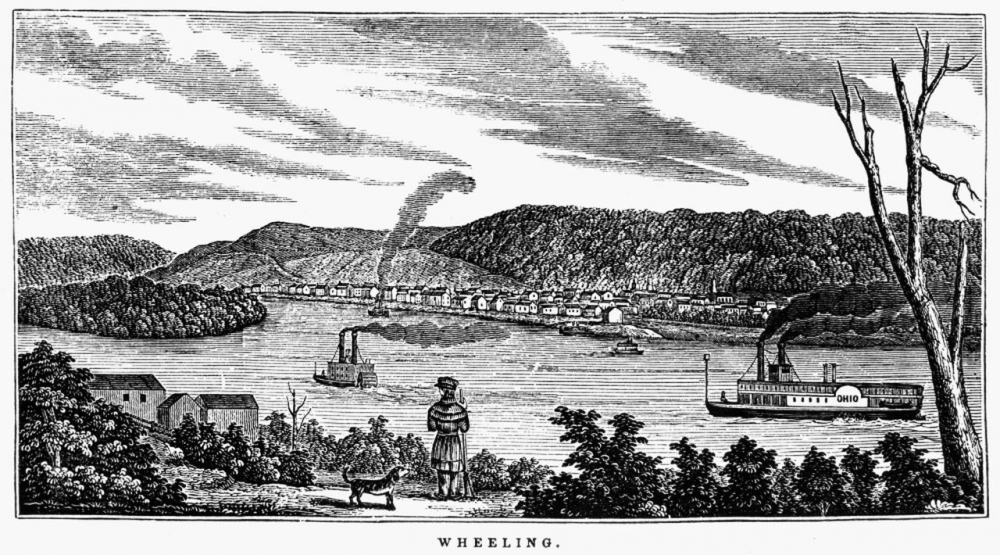 A circa 1840 wood engraving depicting Wheeling prior to the Suspension Bridge.

By the 1870s, the Fourth of July was the most important secular holiday on the calendar. Congress passed a law making Independence Day a federal holiday on June 28, 1870.

In 1776, Wheeling, then the state capital, became the official headquarters for organizing the West Virginia display at the United States Centennial Exhibition held in Philadelphia that year. Planning for the national celebration led to local interest in creating a "once-in-a-lifetime" local centennial celebration, according to an article by Dennis E. Lawther in the July 1977 issue of West History History.

"Plans called for the firing of a canon to open the gala event, a two-day concert, a gigantic picnic on the Island, and an exciting fireworks display to climax the day's event... The 'Red, White, and Blue' flew briskly in the wind from balconies, businesses, and residences. National flags honoring forty-one nations decorated the windows of the City Building. City workers placed 506 Chinese lanterns on the Suspension Bridge for illumination during the night hours... At 12:00 a.m., a '100-gun' salute by West Virginia University Cadets echoed across the hills announcing that Independence Day had arrived. Quickly Wheeling came alive. On the surrounding hills, people ignited bonfires which lit up the night sky. Bells rang from all sections of the city. People continued to celebrate throughout the night." 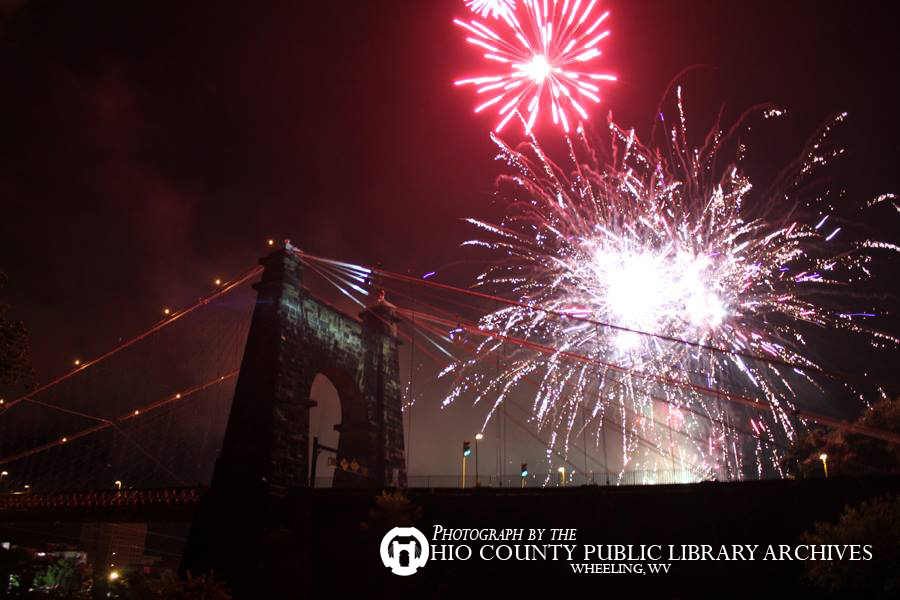 Following an early morning parade, townsfolk gathered on the Island for the picnic and entertainment from various bands and singing societies, enjoying such games as greased pole climbing, egg racing, and stilt racing. A mid-afternoon thunderstorm left the picnic grounds "a sea of mud," but didn't dampen spirits. It did, however, dampen the fireworks. As night fell crowds began to gather along the river bank and on the Suspension Bridge. "The display was less than spectacular, however, since most of the fireworks had been destroying during the afternoon storm."

Luckily, weather conditions look favorable for this year's celebration. The traditional Independence Day celebration will return to Wheeling’s Heritage Port this year after the 2020 cancellation due to the COVID pandemic. Sunday's 4th of July festivities at the Port will kick off with a 7:30 pm concert by the Wheeling Symphony followed by fireworks at dusk.

To learn more about 4th of July in Wheeling, including the first fireworks, Civil War observations, and centennial and bicentennial celebrations, visit our history & archives blog, Archiving Wheeling. Read more at http://www.archivingwheeling.org/blog/celebrating-4th-of-july-in-wheeling.

When a Federal or State holiday falls on a weekend, like Independence Day does this year, it is observed by federal, state, county, and municipal agencies the following Monday. As such, the Library will be closed Monday, July 5th, in observation of the holiday. 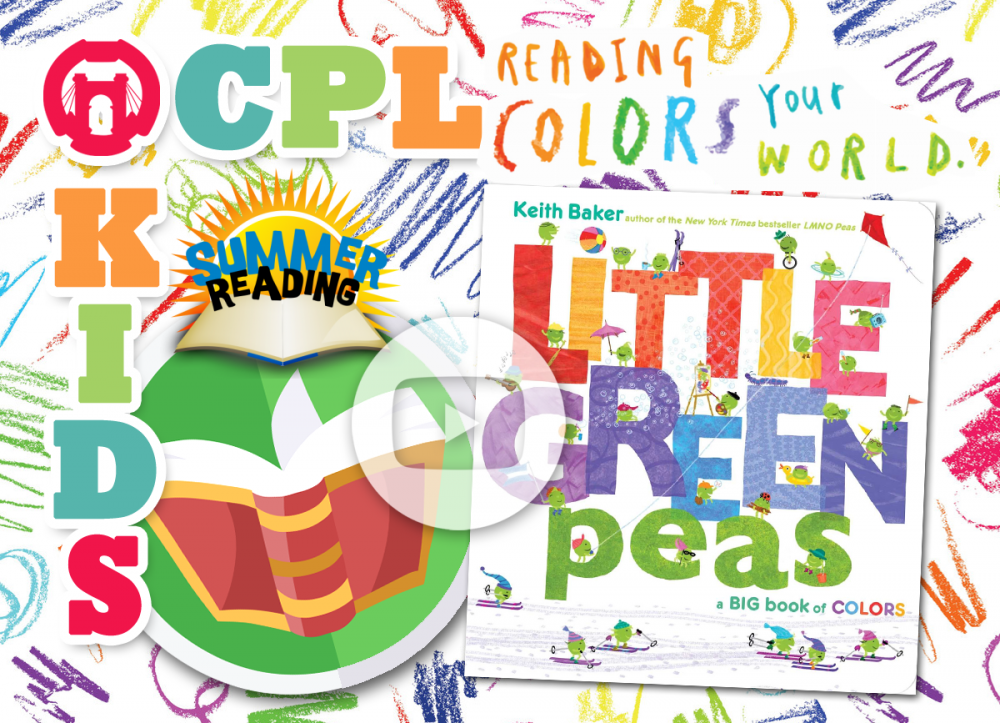 SUMMER READING 2021: Reading Colors Your World!
WEEK OF JULY 5: It's not easy being GREEN!
We will read Little Green Peas by Keith Baker.
Book Synopsis: Explore the world of color with Baby Bear. Baby Bear has so much to learn about the world From the moment he wakes until it's time to curl up and go to sleep, he explores outside with his mama. They see green leaves, blue jays, brown trout, and—best of all—a patch of yummy red strawberries. 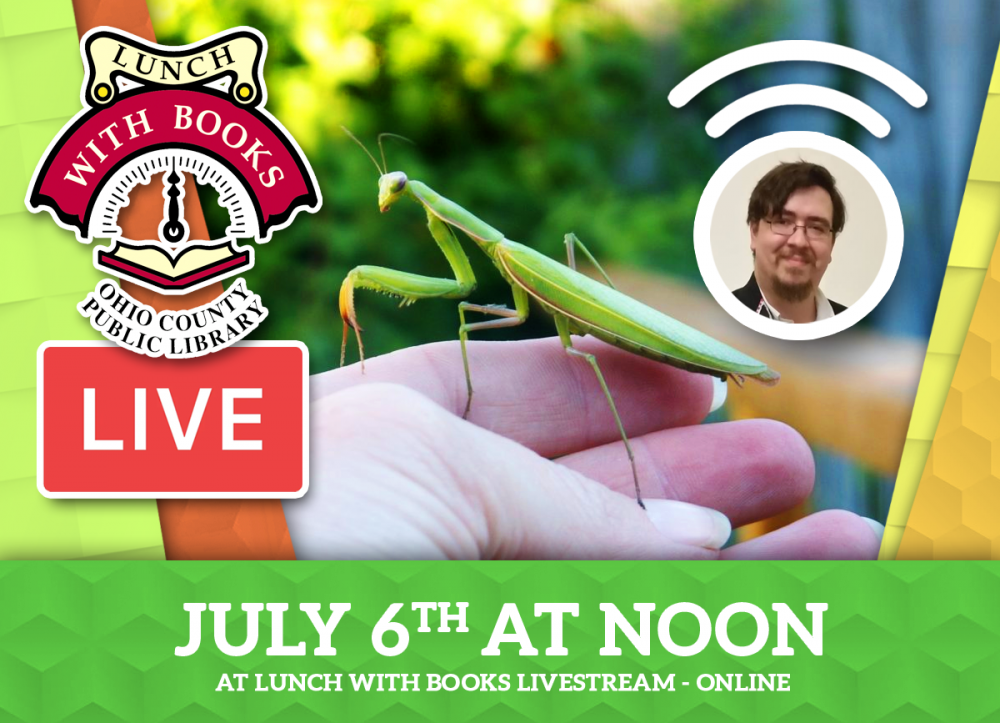 LUNCH WITH BOOKS AT NOON - In the Library Auditorium and online on the LWB Facebook page and LWB YouTube Channel.

As an add-on to our summer People's University series, People & Bugs, OCPL staff member Nayt Knapp will address questions about mantises, including: How long do they live? What do they eat? What's sexual cannibalism? Can they fly? Are they dangerous to humans? How smart are they? Do they make good pets? Is it illegal to kill one? Nayt will also tell us all about the exciting new Mantis-CAM (view live now!) and Vivarium exhibit at the library.

Help us name our two new female Chinese Mantis nymphs! Send us your suggestions through our online form here. On July 15 at our final PU Livestream Bugs & People, we will choose the two winners. In addition to the honor of naming the first two OCPL Mantis-Cam Mantises, the winners will receive a fabulous mantis-themed gift and a gift certificate to a local restaurant!

While the Library will be closed on this year's observed Independence Day, access is always available to many library services remotely. With an internet connection, you can enjoy online services from anywhere. Browse and borrow downloadable books, audiobooks, and videos from the West Virginia Downloadable Entertainment Library Initiative (wvdeli.overdrive.com), Hoopla (hoopladigital.com), and the rbDigital Gateway.

E-books available through WV Deli and Hoopla about West Virginia: 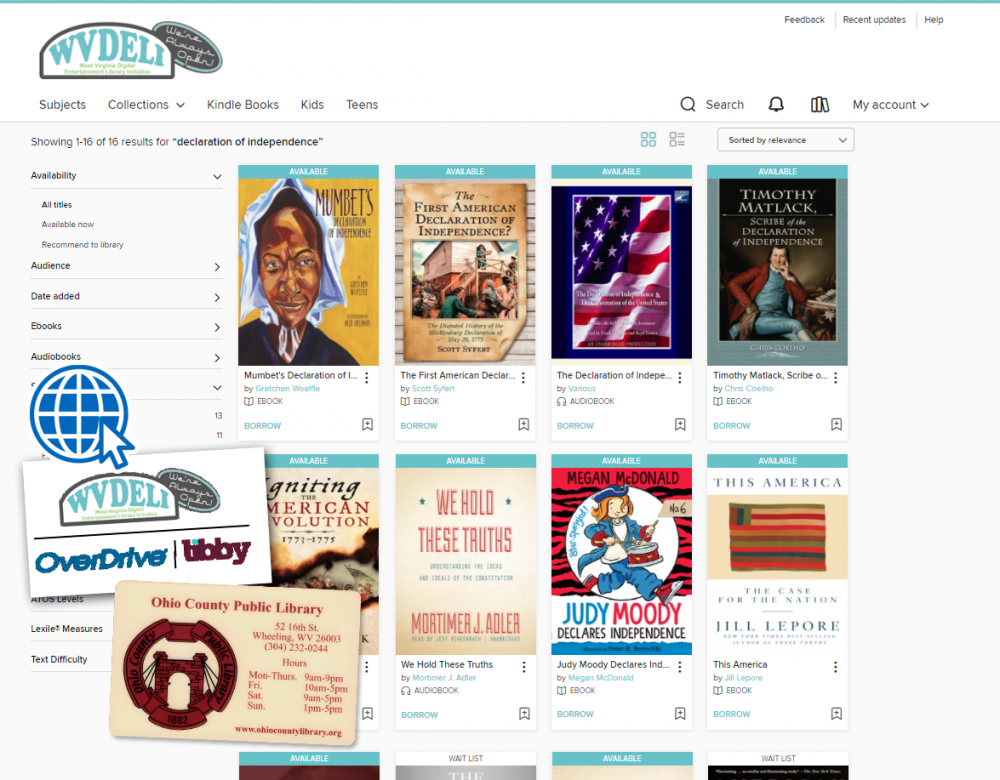 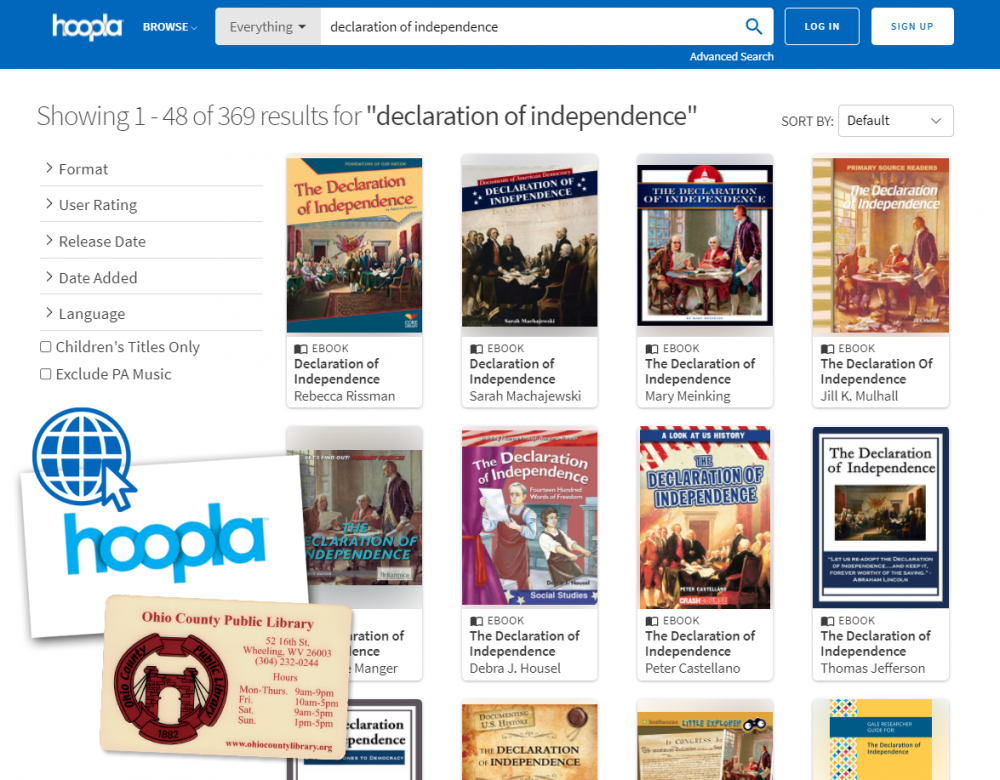 All it takes to log in is your library card number and PIN and you are ready to start downloading or streaming to your tablet, smartphone, anytime, anywhere. 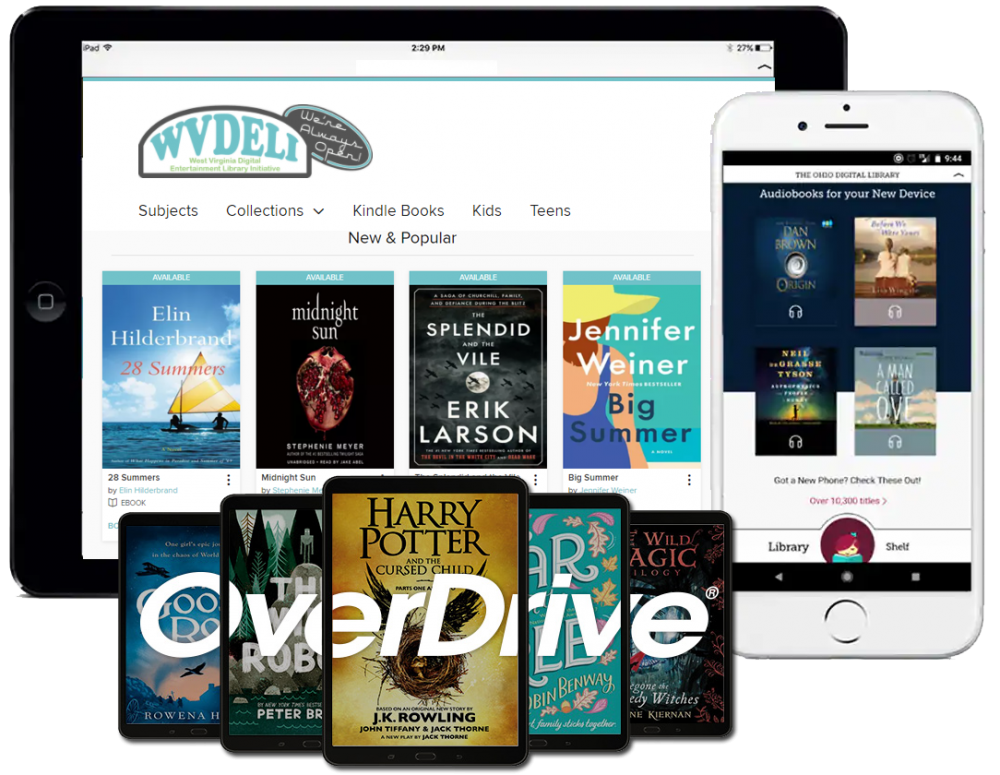 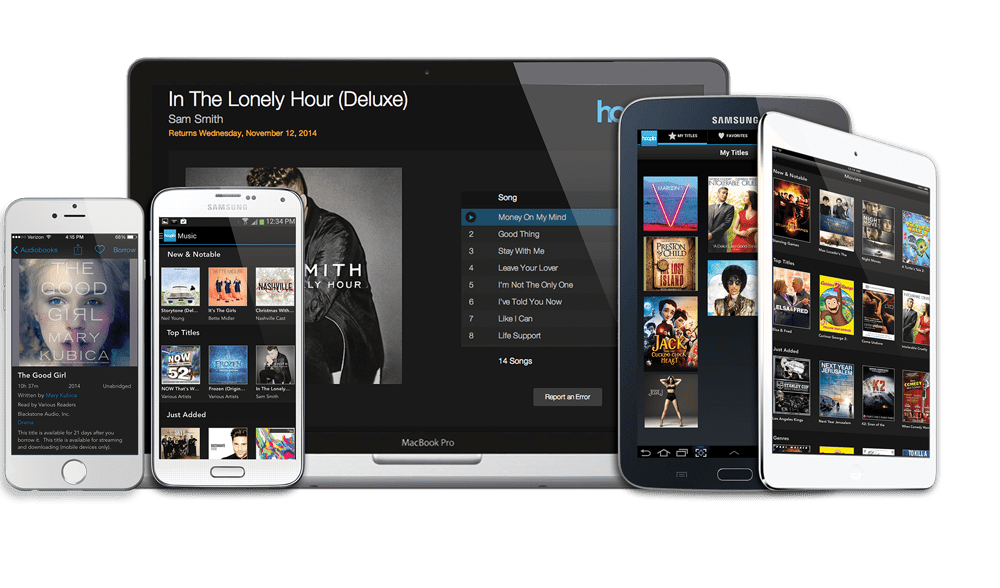 Have a safe and celebratory 4th of July!