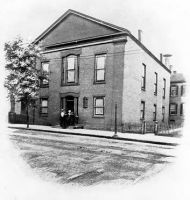 Chapline Street Church is the oldest daughter of the venerated mother Church of Wheeling Methodism.

The history of the organization is as follows: "At a Quarterly Conference of the Fourth Street Church, held March 11, 1848, an estimating committee, previously appointed, reported a plan, specifications and estimates of a house, 42x63 feet, supposed cost $2,516. They also reported a subscription of $1,829.50. On the basis of this report, the Quarterly Conference authorized the trustees to proceed at once to the erection of the Church. Following are the names of the trustees: Elijah Day, John Fisher, Daniel Zane, Wm. J. Bates, and Robert Hamilton. At the ensuing Quarterly Conference, July 26, 1848, the trustees reported that Thomas Hornbrook and Henry Echols had made the Church the generous offer of a lot 60x120 feet, on condition that a house of worship should be built thereon to be ready for occupancy by next Christmas, and to cost not less than $2,000.00.

They further reported that they had contracted with William Exley for the erection of a house to cost not less than $3,000.00.

At the Quarterly Conference held December 30, 1848, the preacher in charge was requested to appoint a separate Board of Trustees for the Chapline Street Church.

At the Quarterly Conference held June 9, 1840, the old Board of Trustees was released from all responsibility and liabilities by the new Board assuming the same. This new Board consisted of Thomas H. List, Henry Schols, Joseph Pedley, S. C. Stevens, Z. Garrold, A. A. Adams and C. D. Hubbard.

For fifty years the Chapline Street congregation worshipped in the above described edifice and accomplished great good for the Kingdom.

The above history is taken from a historical sketch written for the Fiftieth Anniversary of the Church, June 18, 1899, the congregation celebrated its fiftieth anniversary. Rev. G. E. Hite, D. D., Presiding Elder and Rev. W. J. Harkness, Ph. D. Pastor.

Chapline Street people look back with pride to the great preachers who have served them and to the noble history made by this Church.

During the pastorate of L. E. Bee the steeple was struck by lightning and in making repairs it was removed completely and repairs and redecorating the sanctuary was accomplished. The one hundredth anniversary was held in June, 1949 at which time a new Hammond Organ was installed at a cost of $2,900.00 to replace the old worn out pipe organ.

The beautiful stained glass windows of the sanctuary were in dire need of repairs and this was accomplished at a cost of $2,200 during the pastorate of Karl E. Wright. The church membership was materially increased by Brother Wright's efforts.

For several months Brother W. A. Hopson a retired minister served the church well and also increased the membership. During his pastorate the sanctuary and Sunday School room was redecorated, all the work being done by the men of the church.

Brother Robert Johnson present preacher has by his untiring efforts brought in many new members. The Woman's Society of Christian Service and the Men of the Church have during the past year completely remodeled and enlarged the kitchen; the ladies holding bake sales to raise necessary funds to pay for a new kitchen range recently installed. Extensive repairs to the interior of the parsonage have been made and the outside newly painted.

A new gas furnace is now being installed at an approximate cost of $2,700.00.

The future of any church is gauged by the quality of leadership and the progress that it has made in the past. Our church has always been gifted with high calibre leadership and the willingness to work diligently for a better tomorrow. Our present Official Board and Trustees have consecrated themselves to leading our church into great days of service.

With God's help the future is ours and the blessings thereof.