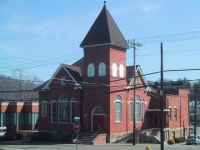 The past 100 years in the life of our church have been years of determination, dedication, hard work, and stepping out in faith by many individuals. Today, may we offer a tribute to those who walked the walk before us and with us.

In 1886, attempts were made to establish a Methodist congregation by meeting in homes and schools; then in 1896, just 100 years ago, a Rev. Kelly began conducting services in Hands Hall, located above a store 00 it was called Methodist Mission. Later the group met at Chambers Hall, which became the site of Valley Camp Coal Company for many years. Between 1898 and 1904, Elm Grove Church was referred to as a "mission point," meaning that only a part-time pastor served the church. During this time, the pastor also served churches at Fulton, Edgington Lane and/or Triadelphia. In 1906, two lots were purchased for $1,400 - and this property became the site of our church today.

Elm Grove church was affiliated with Triadelphia in 1907 - and our membership was 22 at that time. During the fall of 1908, a structure affectionately called "The Tabernacle Church" was built. This house of worship was dedicated September 2, 1910, and for two years (1910-1912) Elm Grove was placed with Edgewood M.E. Church for the pastor's assignment. The Tabernacle was a plain wooden structure built on high props with three windows on each side and a front door. It was crude in appearance and never plastered, but considered a milestone in the lives of members.

On August 4, 1911 ground was broken for a new church, and the cornerstone was laid October 22, 1911 on the south side of the building facing Kruger Street, bearing the inscription "First M. E. Church of Elm Grove 1911." Items in the receptacle placed in the cornerstone included a Bible, a new Testament, a copy of Wheeling Intelligencer, names of members and other small articles. The building was completed the following year, and dedication services were held July 21m 1912. The original Tabernacle building was sold to one of the Trustees, and now part of a Valley View residence.

From 1913-1921 the church did not own a parsonage - this it was necessary to rent property. In May 1921, the parsonage on Marshall Avenue was purchased (for $6,700) and this remained the home of ministers until 1966 when a new parsonage was built on Hurst Avenue.

At the 1912 Annual Conference, Elm Grove was accorded a "station appointment," meaning the church would now have its own full-time pastor. By 1929, Elm Grove had 536 members and more space was needed.

In the meantime, Epworth League for young people was organized in 1908; and a Boy Scout troop was started in 1913; during World War I and II service flags were placed in the church with stars denoting church members serving their country. Many events and celebrations were held - homecomings, anniversary celebrations, a miniature wedding, plus open houses and anniversaries of church dedications commemorated each year thru 1936.

1936 brought changes in the floor plan - pews were changed to face the west side and new pulpit was erected. The gift of a used organ from 4th Street and Zane Street (now Thompson) Churches was graciously received (organ was dedicated in April 1937). The organ was dismantled in 1973, but a part of the paneling which encased the organ forms a cabinet for the present public address system.

Groundbreaking was held in January 1953 for an educational addition and renovation of the sanctuary, with dedication ceremonies held January 25, 1959 - a great step forward. Addition of the ramp in 1960 was another beneficial improvement. Many Sunday School classes - Golden Links, Silver Links, Winsome, Comrade and 79'ers - all worked diligently for needed improvements by holding dinners, strawberry festivals and other activities and events.

By 1962 the church roster contained 1,018 members, and mid-week Bible School was begun. 1966 brought about a name change from First Methodist Church - Elm Grove to Elm Grove Methodist Church. Two pieces of property were purchased in 1968 for future expansion. The early 70's brought forth plans to modernize the sanctuary - new pews, wiring, communion rail, carpeting, along with stained glass window repairs and renovations to some areas, including placing the pews back in the original location. A new electronic organ was purchased. The first service following the modernization was held November 11, 1973, with dedication ceremonies December 2, 1973. Dedication of the organ was held September 1974.

Approximately ten years later, the need for more space again became apparent, and in 1984 plans were underway for another educational addition for Sunday School rooms, Newmeyer Hall and the pastor's office. Groundbreaking for the new wing was held in April 1986. Later in 1986, the 75th Jubilee Celebration of the laying of the cornerstone in 1911 was held at Oglebay, with former pastors attending. In the past few years, other property has been purchased, building razed, and paved parking lots developed. A Memorial Brick Wall is being developed, and needed projects will always be with us.

We've come a long way in 100 years, due to members' ongoing willingness to accept responsibilities; make commitments of time, talent and funds to accomplish goals; pursue their desire to advance in spiritual life; support activities in the church; and to maintain faith. They have accepted stewardship roles to enable the church's mission to continue to be one of love, understanding, compassion and community.

[ -- from Cooking Through the Years: Elm Grove United Methodist Church, 1997 ]