The Details of the False Work Explained — An Interesting Job.

GETTING READY FOR THE STONES

Some Idea of the Magnitude of the Work that Must Be Done Before the Construction of the Permanent Arch Can Begin — Large Quantities of Fine Timber Used.

DAILY a large crowd gathers on the city's temporary wooden bridge over Wheeling creek, adjoining the site of the stone bridge now being constructed, to watch the progress of the work, which is just beginning to reach the interesting stage. The crowds frequently line the west side of the bridge to the depth of two or three rows of people, in spite of the fact that for months a big sign has been displayed at the north end of the west sidewalk inscribed with the words: "Danger! No one is allowed to loaf on this bridge by order of the Board of Public Works." Doubtless the hundreds of people who insist on loafing there in spite of the notice and of the vigilance of the city's watchman, Pat Weir, who is charged with the duty of enforcing this order, console themselves with the knowledge that they are not "loafing on the bridge by order of the board of public works," but of their own free will and accord.

People with any taste for observing novel and interesting things are excusable for wanting to see what is going on just now at the stone bridge. It is not often one has an opportunity to see a stone arch of any magnitude constructed, and nobody ever did have a chance to see such an arch as this go up. There is but one larger span of stone in the country, and it is not so slight a rise. The details of the construction of a structure destined to be noted all over [ ... ] when completed may well be watched with unusual interest.

The work now going on is as interesting as any that is to be done on the bridge. The masonry cannot be much farther advanced until the false wooden [ . . . ] which the stone arch is to be built is completed. Yesterday the "skewbacks" were being placed on the south abutment. These are the stones on which the ends of the arch rest. They rest on the projecting part of the abutment, and are supported besides by a course of stone set on a slope, so that practically the arch runs clear down into the abutment. This work will consume at least two weeks longer. If the weather is good, the work of laying stone in the arch proper can begin by November 16, probably. 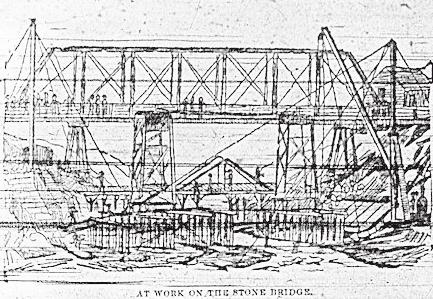 The wooden arch to be built as a support for the stone arch until it is completed and able to stand alone, is in itself a substantial and costly structure. It was said in yesterday's INTELLIGENCER that the timber alone, before put in place, would represent an expenditure of $9,000, and though this is but an estimate, it is not too high, as there will be consumed in this arch 250,000 feet of the best lumber. Some of the timbers required are thirty-two inches thick when shaped. There are a number of these, forming the tops or ribs of the arch. A good quantity of iron also enters into the construction of the false work.

When the false arch is completed, the stone arch built on it, and the work done, a delicate operation remains to be performed. This is to remove the temporary support and let the arch assume its own weight. If the weight comes upon it at one place first, or if it is unevenly distributed at first the consequences might be serious. To let the arch settle evenly and at once is a problem which has been solved here by an ingenious device. The workmen are now engaged in adjusting with the nicest care the huge timbers the rows of piles that are to support the false work. On these cap timbers will be iron sand boxes. Each box, which is substantially built, will be nearly filled with sand, and on the sand will rest a wooden cylinder fitting closely in the top of the box. On these cylinders will rest other caps of solid timber. These in turn bear the timbers which form the temporary arch. It will be seen how important it is that the caps now being placed shall be absolutely true, for they are the foundation of the arch, and if they should be out of their true position it would affect the whole work.

The sand boxes spoken of are fitted with two openings, each having a sliding door, which tightens itself when closed, owing to its peculiar [ . . . . ... ... ... ] when desired. The stone arch completed, these slides are opened and the sand allowed to run out, the arch thus settling gradually and in its whole length at the same time.

The bridge is well worth a visit now. The twelve rows of piles with the cap-timbers on them, the numerous derricks and engines, the tramway to carry the timbers and stones to the points where they are needed, make a very impressive scene. Yesterday another engine was placed on the north bank of the creek. When the work is in progress full blast there will be six engines in use at the work, besides one to operate the derrick at the stone yard on the South Side.

This stone yard, at the corner of Twenty-ninth and Eoff streets, presents a scene of activity. About twenty-five stone cutters are employed shaping the stone to be used for the face of the wing walls. An immense pile of stone to be used for "backing" on the arch stands ready for transportation to the work. The material for the wooden arch is already shaped and needs only to be put together.

Two more derricks for use on the bridge are now being rigged up at the yard. The mast of each derrick is 65 feet 6 inches high, composed of two timbers spliced together, and 14 by 14 inches in thickness; the booms are a foot longer than the masts and measure 12 by 12 inches. Paige, Cary & Co. have been using some big derricks on their work in Wheeling, but the ones now being made are longer and larger than any they have used here heretofore. They will be placed in position and used to set the frames of the wooden arch in place.

AT THE MAIN STREET BRIDGE

The work on the wooden temporary arch on which the stone arch of the Main street bridge is to rest gets more interesting every day, and the crowds that are attracted to the spot by curiosity grow larger. The cross timbers have now been nearly all adjusted, and at least half the sand boxes are in their places, with the wooden cylinders resting on the sand in them. These sand boxes were made by Sweeney & Son. All the other iron work came from Pittsburgh. The work of attaching the boom to the big derrick on the south platform is a tedious job. The derrick has been guyed to a pole on the north side of Sixteenth street, next [to] Erb's livery stable, and in order to let B. & O. trains under the guy wire it was necessary to tie it at a height to escape the tops of the highest cars. A huge timber was set down in the earth ten or twelve feet, and secured fast there, and then supported by a prop of the same size fastened at the outer edge of the sidewalk. This arrangement is as strong as the bridge will be itself, if appearances are not deceptive.

A series of small holes has to be drilled in the masonry at each end of the false work, to receive small rods, to which the end timbers of the false work are to be bolted. This drilling has been finished at the south end. It will probably be December 1 before the stone arch can be begun.

The False Arch Now All Ready for the Laying of Stone to Commence.

The false work of the big Main street stone bridge is now all complete, except the nailing on of the six inch timbers known as the sheathing, and the placing of these has begun at the each, as soon as they are "trued" carefully the laying of the stones of the arch can be begun. The wooden arch is an impressive structure, as can be seen by the excellent illustration of it which is appended hereto. The work has been heretofore described in the INTELLIGENCER, and the picture give a very clear idea to those who have not seen the arch what it looks like. From end to end it is one hundred and fifty-five feet, and to adjust the timbers to that when this false arch is removed the stone work will be rigid and firm was a work of the most extreme nicety. Nor is the nice adjustment all done. It is necessary that each of the timbers which are now being placed on the arch to receive the stone shall be true to the inside line of the stone work to the hundredth part of an inch, and every successive piece of the work till the bridge is ready for travel must receive the same care and attention that the placing of the main timbers of the arch required. Crowds inspect the progress of the work every day, especially on Sundays.