Signalize the Event — A Large Crowd Present, and the Historic Occurrence Makes a Great Sensation. Some Details of the Construction and Constructors. 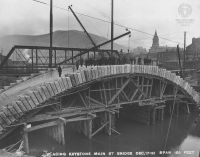 At eighteen minutes after two o'clock yesterday afternoon the last stone of the arch of the Main street bridge over Wheeling creek was lowered into its place in the structure by the big derrick, amid cheers from the multitude and the blowing of steam whistles.

It was expected that the event would occur early in the afternoon, and even a larger crowd than usual had gathered in the vicinity, many prominent citizens being in the assembly. It was about noon when the first stone of the last course, the keystone row, was set on the western end of the row. The work was pushed from that on, and all the stones but two were in place at a quarter past two.

When the last stone was in place there was a sort of a "cessation of hostilities," and Mr. Carey called out Judge R. H. Cochran, who was an interested spectator, and seconded by the crowd, demanded a speech. The judge protested at first but seeing there was no way out of it, he turned in and made

He said that he had been invited there by Mr. Carey to witness the placing of the last stone in position, but he did not expect himself to be put in this position. He complimented all concerned on the grand and successful piece of work. He referred happily to the fact that Wheeling had at one time in her history possessed the longest suspension bridge in the country, had now the heaviest railway bridge, and to-day added another triumph by having the largest single span stone bridge in the land. He complimented the contractors and the city on the completion of the main part of the work so creditable to the enterprise of the community and the skill of the builders. His remarks were received with enthusiasm.

After the cheering had subsided the crowd began to yell for

His honor, who had been standing on the wooden bridge, responded by coming over to the new structure and thanking the crowd and complimenting the city and the contractors on the successful termination of his "pet scheme," as some people called it, this fine bridge built under his administration.

Mayor Seabright said he was born in 1836, the same year as the city of Wheeling, and that made them twins. Just at that moment Judge Cochran, who is noted for his repartee, replied, "Yes, I also was born in the same year, and that makes us triplets." This set the crowd laughing so that the Mayor cut his speech off short, and the crowd dispersed with renewed cheers.

A good portion of them adjourned to Henry Bierberson's on South street, who entertained the contractors, press representatives, overseers and city officials at an impromptu banquet. Toasts were drunk to the success of the bridge, and the crowd whiled away a few hours very pleasantly. Mr. Joseph Emsheimer, the orator of the Second ward, made a very flowery speech, and congratulated every one connected with the bridge, and Mr. White, the assistant city engineer, responded in a modest but happy manner.

Toasts were then drunk to the host, and everyone adjourned feeling good over the successful completion of the arch.

When the last course was started Agent Siebert, of the Anheuser-Busch brewery, sent a keg of his beer over on the arch, and the workmen got away pretty quick with what the visitors did not drink, The large flag which usually floats over the city hall and several small national flags floated over the work for the rest of the day.

A MARVELOUS PIECE OF WORK.

It may well be questioned if there was ever a piece of work of similar magnitude which was finished as successfully and smoothly as this arch. It its progress there was not one serious accident. When the last course of stone was laid the individual stones fit as neatly as anything could possibly fit. Every dimension stone was exactly correct when brought on the work, and only one stone had to be redressed, and that was because one fell off the hooks and was ruined.

The engineering work on the bridge was in charge of City Engineer Frank Hoge and his able assistant, A. I. White, who have abundantly illustrated their ability. S. Bradley, of Wisconsin, was employed by them as inspector and no more faithful man was every employed on similar work. He was at the work at all times when anybody was working, and not a stone went into the arch for which he could not vouch. The important position of chief stone cutter and dimension man was filled by C. S. Olmstead, a man with a national reputation for fine work. He has been on the heaviest work in the country, but none that was heavier than this, and it was a matter of general comment when the fact that he was engaged became known, that

THE WORK WAS IN GOOD HANDS.

There are no more competent men. Joseph MacMahone, of Elyria Ohio, framed the centers, and here also the city was fortunate in the choice. His work stood the test so well that when the arch was erected the ends did not need adjusting, and the center was but a fraction of an inch out of true.

ON the south end Mr. Hillis was foreman, and his chief stone-setter was Charles Porter. On the north end Ed Mann was the foreman and Frank McNabb the chief stone-setter. There was a race from the start as to who would reach the center first, and owing to the dropping of one stone on the north end Hillis and his crew beat out and were awarded the honor of placing the last stones.

The finish of the arch was regarded with interest everywhere, and among the interested spectators of the laying of the last course of stone were Messrs. A. H. Sanford and N. N. Neff connected with the office of the engineer of the maintenance of way of the C. & P. Railroad at Wellsville, Ohio.

THE BED ROCK ALL RIGHT.

There was at one time some talk about the bed rock on which the foundation for the abutments rests. It is a red clay, and it was feared that it would not be solid and firm enough. The fact that the piles on which the bridge now rests are driven down to this same rock and that each pile is supporting from eighteen to twenty-eight tons, would seem to show that it is as firm as anything could be desired to be for the purpose.

There are in the bridge 771 stones in all. There are 85 courses, the courses varying from eight to ten stones each. The keystone is the forty-third from the north. Each stone is one foot eleven and thirteen-sixteenth inches on the inside, and owing to the fact that the inside and outside arches are not segments of the same circle they all vary in width at the outside.

The span is 159 feet, and the crown of the arch is 28.4 feet above the top of the abutment, which is 12 feet above low water. The arch is a segment of a circle, being nearly the quadrant, the exact angle being 78.4.

The stone in the arch weighs about 3,344 1/2 tons, there being 1,651,603 cubic yards, of the average weight of a fraction over two tons. The actual weight on the arch is, however, somewhat less than this, owing to the friction and lateral pressure on the abutments. The weight bears greatest on the centre third, which is not true of most arches. One fact that is now of special interest is that there is plenty of room for water or gas pipes or electric conduits in the structure.

There was a good deal of good-natured rivalry between the mail carriers whose work is on the South side, as to which of them should cross the bridge first. Gus Knoke, Bob Agnew and Eddie Schul got their bags of mail matter and broke for the bridge at a run. Knoke took the lead, Schul was a close second, and Agnew brought up the rear. In this order they crossed the bridge, and Agnew said he would have been first had he not been handicapped by more years than are on the backs of either Knoke of Schul.