➤  William J.B. Gwinn,  a self-described "Railfan,"  was born in Summers County, WV on July 30, 1897 to William A. Gwinn (1860-1938) and Fanny Alice Richmond Gwinn (1860-1861). According to the 1920 Census, he was living in Huntington, WV and working as a motorman for the Ohio Valley Electric Railway Company.  Gwinn moved to Wheeling in 1920 to work for the B & O Railroad, but transitioned to street cars that same year. Gwinn worked for the Wheeling Traction Company, then its successor, the Co-Operative Transit Company on the Martins Ferry line along with the well-traveled Wheeling-Warwood-Steubenville line right up until the last day of operation on November 23, 1947. Gwinn himself then made the switch to bus driver, retiring in 1962. After he retired, he moved to Bridgeport, Ohio (which is just across the river from Wheeling). He died on November 3, 1976.

This collection consists of  28 photograph albums compiled by William J.B. Gwinn from 1918-1976. The photographs document Gwinn’s career and interest in the transportation field, ranging from early 20th-century trolley cars, streetcars, and trains, to the mid-century transition to buses. Many of the photographs include a caption that details the date, time of day, location, and route on which the photograph was taken. In addition to documenting individual cars or buses, many of the images depict detailed street scenes and other events, such as parades and grand openings. While the majority of the photographs were taken by Gwinn, there are many taken by other transportation enthusiasts; in these cases, the photographer is credited. Most of the photographs were taken in the Upper Ohio Valley, including towns such Wheeling, Benwood, Moundsville, Weirton, and Wellsburg in WV and Barton, Bridgeport, Martins Ferry, and Steubenville in Ohio. There are, however, many photographs from other locations, such as Detroit, MI, Scranton, PA, New York City, and Chicago, IL.

➤View a news story and a photograph gallery of the Gwinn exhibit at the Ohio County Public Library. 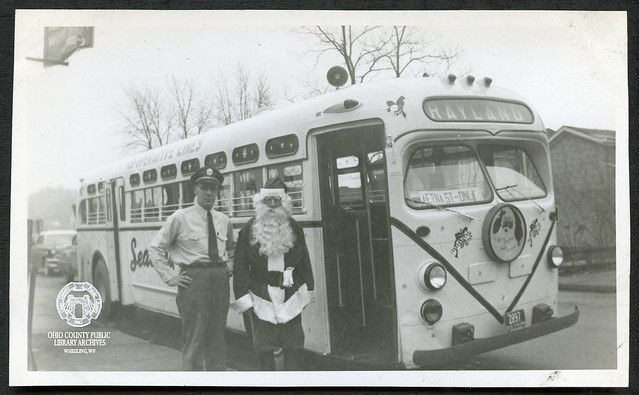