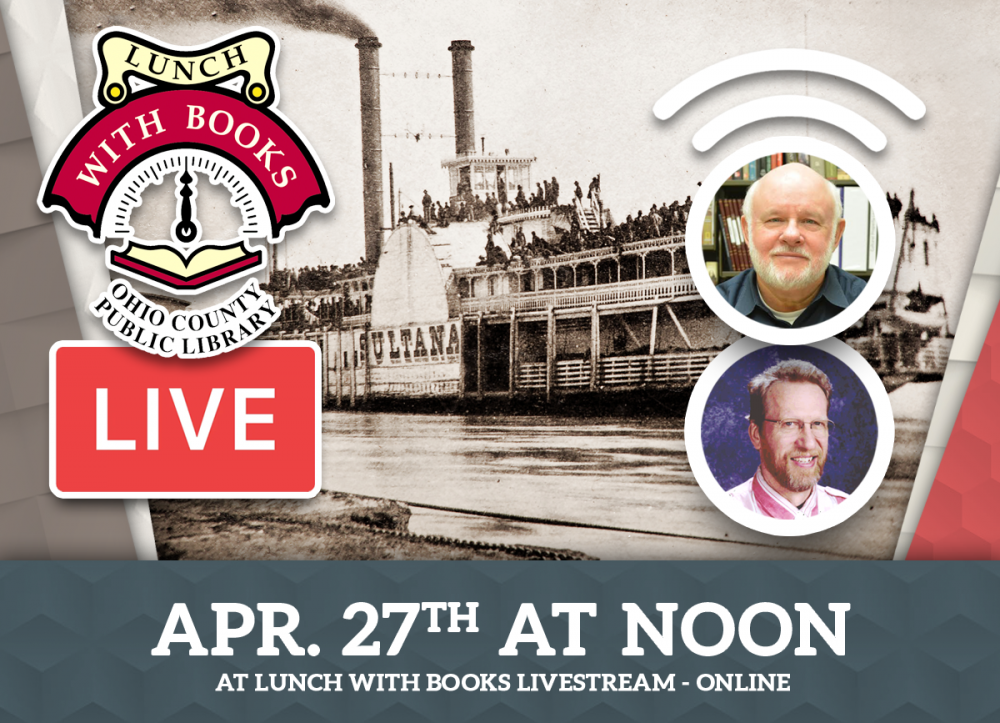 The Sultana, a Civil War-era sidewheel steamboat, exploded and burned on the Mississippi River on April 27, 1865. Acknowledged by Congressional Resolution as the greatest maritime disaster in United States history, nearly 1,200 of the more than 2,200 passengers and crew were killed in the explosion and fire which sank the Sultana near Marion, Arkansas, across the river from Memphis, Tennessee. Designed to carry only 376 passengers plus crew, investigations revealed a litany of corrupt practices, including kickbacks, and bribes paid to high-ranking Union officers caused the overcrowding of the boat. The disaster has been overlooked in history since it was overshadowed by the assassination of President Abraham Lincoln and the search for his murderer. Events at the end of the Civil War conspired to wipe the memory of this tragic event from our national history for over 130 years. In its magnitude, the story of the Sultana is as great as that of the more famous Titanic, and yet much more intriguing.

Several men from the Wheeling area were on board. See: https://weelunk.com/april-1865-burst-historic-events/

LEARN MORE ABOUT THE WHEELING & WV MEN:
Through the Ohio Valley Civil War Roundtable, Barbara Pirhalla and Jeanne Finstein will do a presentation on the Wheeling and other West Virginia men who were aboard the ill-fated Sultana when it went down on April 27, 1865. Most were Union soldiers who were returning home after being released from Confederate prison camps at the end of the Civil War; two teenagers were cabin stewards. Many perished in the disaster. The presentation will begin at 6:30 pm, Monday, June 21, in the library of the Scottish Rite on 14th Street. The talk is free and open to the public, masks required.

You can also watch our Lunch With Books From the Vault when our good friend, the late Kate Quinn, shared the stories of the Wheeling men on the Sultana at Lunch With Books at the Ohio County Public Library, September 27, 2011. Click here to view Kate's presentation now.

PRESENTER BIOS:
Gene Salecker and Louis Intres, PhD, are both associated with the Sultana Disaster Museum in Marion, Arkansas. Dr. Intres is former director of the Sultana Disaster Museum and a History Professor at Arkansas State University. Mr. Salecker wrote a book about the Sultana, "Disaster on the Mississippi: The Sultana Explosion, April 27, 1865," in 1996 and is currently the historical consultant for the museum. More recently, he wrote a new book on the Sultana which will be published by the Naval Institute Press in the Spring of 2022. The new book encompasses his continuing research over the past 25 years when his first book came out and will dispel many of the myths, stories, and "facts" surrounding the disaster.

Sultana Disaster Museum: The Sultana Disaster Museum tells the story of the tragic events of April 27, 1865 through the use of historic artifacts from the Sultana itself and from many of the survivors.  A 14-foot replica of the steamboat as it appeared before the explosion assists in understanding the magnitude of the event.  Dozens of photographs of the soldiers, passengers, crew, rescuers, and Union officers involved in the overcrowding bring the people and their stories to life: among them, learn how the unloading of a cargo of sugar carried by the Sultana contributed to the explosion, and how at least one man was saved by an alligator. 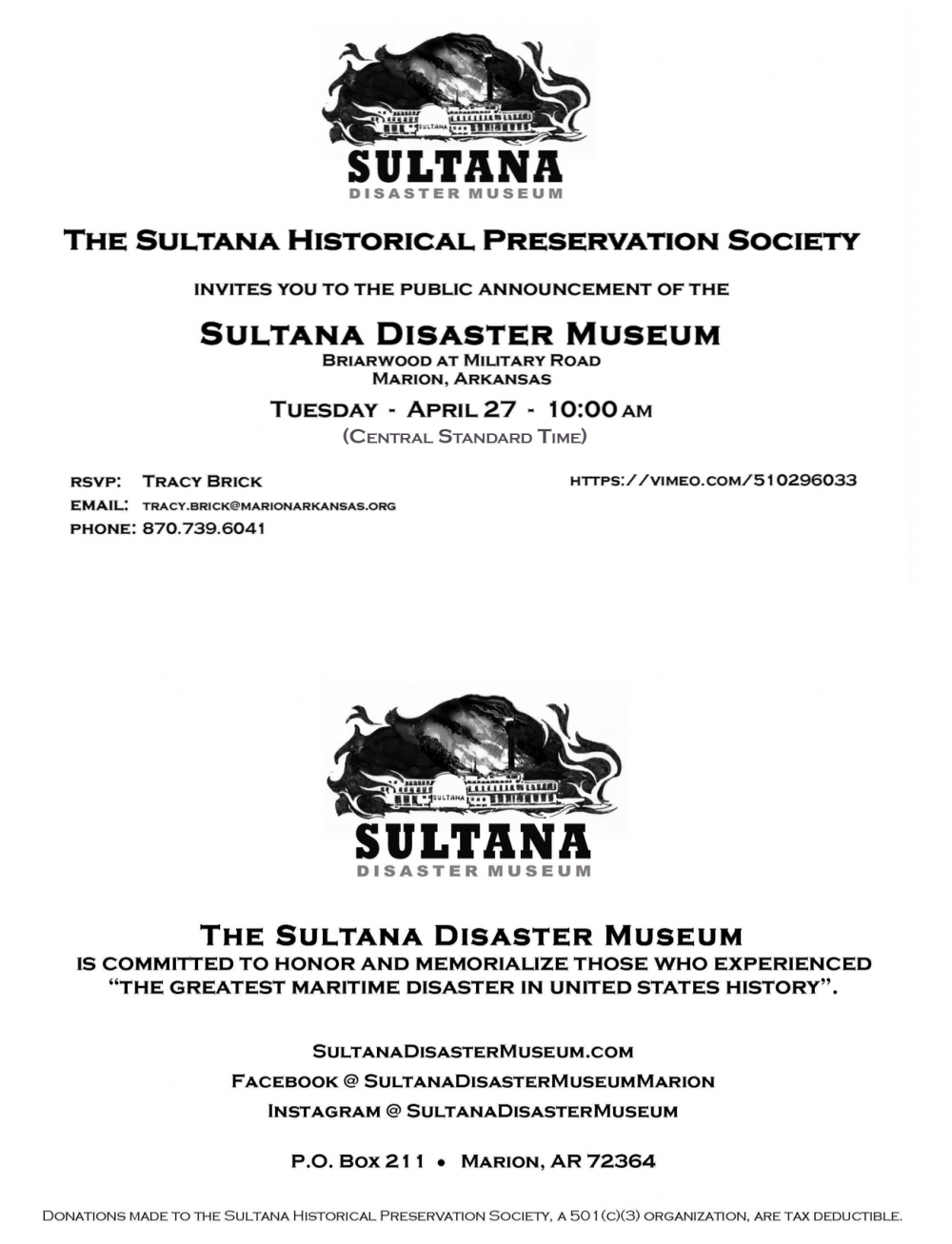 The present Sultana Disaster Museum, created in 2015, and providing less than 1000 square feet, will soon be replaced by a permanent modern museum of nearly 17,000 square feet.

PUBLIC ANNOUNCEMENT OF THE NEW MUSEUM

On April 27 at 10:00 a.m., you are invited to the public announcement of the Sultana Disaster Museum in Marion, Arkansas. This is, of course, the date of the disaster, 156 years ago. This is a big step forward to the goal of a permanent Sultana Disaster Museum. Check out the video from John Fogelman at https://vimeo.com/510296033. 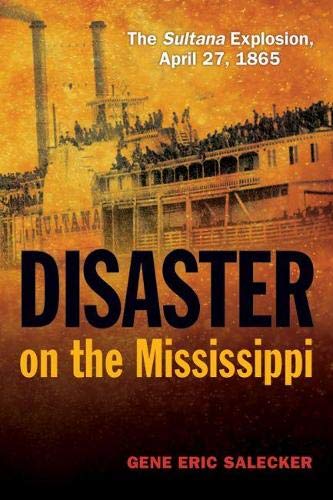 To focus on the personal stories of the victims, both civilian and soldier, Gene Eric Salecker patiently collected material from hundreds of letters, period newspaper stories, and other sources. Readers are first introduced to the individuals involved while they are languishing in Confederate prisons and follow their release to an exchange camp outside Vicksburg and their eventual crowding onto the Sultana. With its emphasis on the human-interest aspect of the Sultana's loss, this book brings to the literature a critical point of view and much new research.

➤ View all books available at the Library about the Sultana

FEATURED VIDEO:
➤ Watch the excellent documentary Remember the Sultana (2015, 96 min.): Reserve DVD from the Library |  Stream through Hoopla with your Library card  |  Watch the trailer on YouTube