Some Idea of Its Beautiful Finish and Furnishings.

And Carven Pulpit and Altar Presented by Members of the Congregation — Interior Decorations of the Most Beautiful Temple of Worship in Wheeling — The Dedication.

The new Jewish synagogue on Eoff street is rapidly nearing completion. In the past week the painters and grainers have been busy finishing up the details of the woodwork. The gas fixtures are all finished, with the exception of the two main chandeliers in the ceiling. These will be put in within the next few days. Yesterday the seats arrived for the main auditorium. They are of the very latest pattern, designed for comfort and ease as well as for ornamentation, all the benches being made of heavy oak, highly polished and elaborately carved.

One of the most attractive features of the auditorium is the altar and pulpit, donated by Mr. Samuel Bloch. The former is made of white pine, Romanesque in style, and covered entirely with scroll work of handsome design, and finished in white and gold. The pulpit is made of heavy carved oak, in natural finish, handsomely carved in unique designs in relief, the main feature consisting of a double row of carved oak columns, and presents a very pleasing appearance, being in keeping with the entire room, which is finished in white with oak wood work.

The stained glass windows, which have attracted so much attention from visitors during the past week, are a beautiful feature, which not only add lustre and beauty to the whole room, but shed a luxuriant light over the whole building. All the windows, with the exception of the memorial windows, are of the same pattern, and made in panels of stained and opalescent glass of rich and harmonious colors, which give them an air of great splendor.

The principal memorial window, presented by Mr. Henry Speyer, is a very striking and beautiful picture, and consists of two panels, one representing Abraham about to offer up his son Isaac as a sacrifice. Both figures have a life like appearance, the flesh tints in the nude figure of Isaac being especially good, and brought out in strong contrast to the dark, rich robe worn by Abraham. The other panel represents Moses with tables of stone in his arm looking out over the people. His face in quiet repose, is full of beauty and majesty, the figure, full of dignity, is of large proportions and clothed in robes of rich colors.

The corona of the upper part of the window is made of opalescent glass, with a centre piece showing an angel playing a harp, with uplifted wing, modelled to excellent artistic effect, with grace and dignity of pose, and drapery pendant in lines whose harmonious regularity carry out the design of the whole with excellent effect. 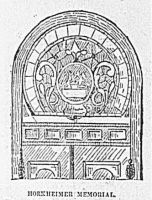 The Horkheimer memorial transom over the front entrance, while not as large as the other windows, is as rich in effect, being made of opalescent glass of beautiful colors. The main treatment is an elaborate scroll surrounding the centre piece, which shows two angels kneeling on a golden ark, with their hands raised in adoration, and wings outspread.

It is now definitely settled that the dedicatory exercises will take place on April 8, at 3 p.m. The occasion will be made memorable by exercises of an interesting character. Two noted Jewish theologians; Rev. Dr. Grossman, of Detroit, and Dr. Benjamin Szold, of Baltimore, will be here to participate in the exercises. Both gentlemen will deliver addresses on that day.