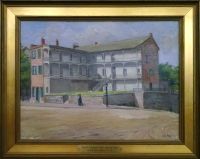 Little is known about the original French's Tavern, but it was a prominent enough landmark at the time that John Joseph Owens deemed it worthy of placing in his series of notable landmarks. The building was erected sometime around 1829 and some years later became known as 'Simms' Boarding House.' Records show the building stood on the southwest corner of Chapline and 14th Street.

In a 1938 article in the Wheeling News-Register, long-time Wheeling butcher Fritz Luikert reminiced about an early delivery route he had as a young man

"I can still remember the route I delivered," Mr. Luikert said. "The first stop I made was John Diehl's place at Tenth and Main streets. Then I went to Jacob Bayha's place in the old Grant House, where the Hawley building now stands.

"I would go to the old Simms boarding house at Fourteenth and Chapline streets where Adolph & Maybus were in business, and then out Sixteenth street to Jacob, where Mr. Odburt and Mr. Jeffers had stores. On the north side of Sixteenth street, J. R. Acker had his grocery and feed store, and sometimes I took sausage to the B. & O. railroad for George Brinkman's hotel at Grafton."

A photo from the OCPL's Brown Collection shows the Simms' Boarding House in the late 1800s:

Later buildings to occupy this space included the Catholic Women's League and Young's Cafeteria. There is now a parking lot where these buildings once stood.