Birthplace of a State


During the spring of 1861, Virginia’s legislature met in special session in the city of Richmond to debate the question of secession from the United States.  That body took its final vote on the issue on April 17, with the majority of delegates voting in favor of joining the Confederacy.  Most delegates from northwestern Virginia, however, voted against leaving the federal union, and they returned to western Virginia where mass meetings were organized to decide a course of action.  Soon after, a call was made for a formal convention, and it was decided that Wheeling would be the safest, most appropriate place.  Little was accomplished in the first convention of May, 1861, but in June, the second convention witnessed the formation of a new government for the commonwealth, the “Restored Government of Virginia.” This government used the city’s U.S. Custom House (now the site of the West Virginia Independence Hall museum) for its legislative and executive functions, and over the following two years, Wheeling served as the capital of all Virginia.  The Restored Government had two principal aims- to restore law and order to the commonwealth, and to create a separate and distinct state out of Virginia’s western region.  In November, 1861 this body met in convention at the Custom House to draft a constitution for the proposed new state of “Kanawha,” and after vigorous discussion and debates, they developed the framework for a new state to be called “West Virginia.”  After tireless efforts by the Restored Government, President Abraham Lincoln decided in favor of the new state, which officially came into existence on June 20, 1863.  Wheeling served as both the birthplace and the first capital of this new state.

A principal figure in these events, Francis Pierpont, a lawyer from Marion County, VA was unanimously elected Governor of the Restored Government of Virginia.  Using a borrowed office in Wheeling’s Custom House, Pierpont led loyal Virginia throughout the Civil War and during the first three years of reconstruction following its conclusion.  Considered the “Father of West Virginia,” his efforts for the statehood movement were critical to its success. (Travis Henline for Legendary Locals of Wheeling)

A Statuesque Figure: Francis Pierpont and the Birth of West Virginia

Following the Ordinance of Secession by the state of Virginia in April, 1861, a series of resolutions were adopted in loyal western counties calling for an assembly of delegates to meet in opposition to the state’s secession from the Union. Representing Marion County at the First Wheeling Convention in May of 1861 was Francis Pierpont, who was subsequently elected governor of the Restored Government of Virginia by a unanimous vote at the Second Wheeling Convention in June, 1861.

Coming to power in the midst of the Civil War, much of Pierpont’s work focused on organizing military regiments for the Union cause. Two documents signed by order of the Governor are now on display at the Ohio County Public Library. The first, a military order from the Commonwealth of Virginia, names James B. Moore First Lieutenant, Adjutant of the 4th Regiment of the 24th Brigade and 3rd Division of the Virginia Militia. The second, a copy of a General Order (written on letterhead from “The State of West Virginia”), shows orders to organize the 1st Brigade of the West Virginia Militia.


During this time, however, it was Pierpont’s efforts for the statehood movement that earned him the name “Father of West Virginia.” Congress was presented with the new constitution and proposal for the state of West Virginia in 1862. The bill passed the Senate in July, 1862, and the House of Representatives in December, 1862. With the urging of Pierpont, President Lincoln signed the bill on December 31, 1862, and West Virginia officially entered into the Union on June 20, 1863.

A.J. Sweeney, who had served as Wheeling’s mayor at the outbreak of the war, but became Colonel of the 4th Regiment of Va Militia in 1863, recorded the events of the day in a Regimental Records and Order Book journal entry.

The Daily Intelligencer reported of the inauguration gathering:

“When the military and civil procession had arrived, according to programme, in front of the Lindsley [sic] Institute, the temporary capitol of the New State – and mingled itself with the vast assemblage, that filled every available space within sight or sound of the capacious platform. . .[1]”

Arthur I. Boreman was inaugurated the first governor of the new state with the capital remaining in Wheeling, while Pierpont continued as governor of the state of Virginia in the new capital at Alexandria.

On the first “West Virginia Day,” June 20, 1863, The Daily Intelligencer offered this fine farewell to the “Father of West Virginia:”

“This day ushers into being the new State of West Virginia, and adds the thirty fifth star to the constellation of the American Union. To-day is the beginning of a new order of things with us here. The old Government goes out and the new one comes in. To-day Gov. Pierpont bids us a formal farewell, as our chief magistrate, and Gov. Boreman will be inaugurated as his successar [sic]. With the one the parting cannot be but sad. With the other the greeting cannot but be joyful. Gov. Pierpont goes to his new field of usefulness and labor, followed by the good wishes and benedictions of a grateful people.”

A statue of Pierpont (commissioned by the Wheeling National Heritage Area and funded by numerous donors) was dedicated on the corner of 16th Street and Market on West Virginia Day, Saturday June 20th, 2015. The ceremony, which coincided with the Wheeling Arts Fest, took place at noon on the grounds of West Virginia’s Independence Hall, where in a borrowed corner room, Gov. Pierpont first held office. Read more about the statue here.

Putting Frank Pierpont on a Pedestal

This gallery of photographs documents the installation and dedication of a nine foot tall bronze statue of Gov. Francis Pierpont, “the Father of West Virginia,” at the northwest corner of 16th and Market Streets in front of the “birthplace of West Virginia,” aka West Virginia Independence Hall, in Wheeling, on June 19 and 20, 2015. 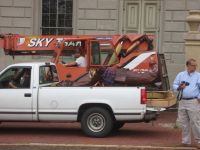 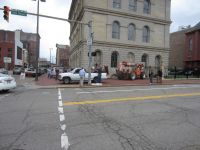 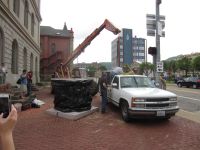 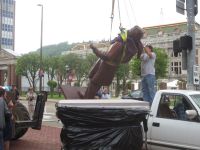 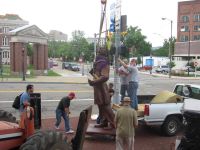 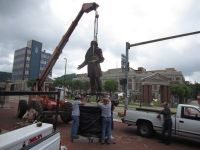 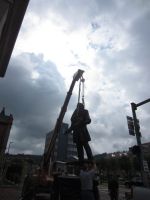 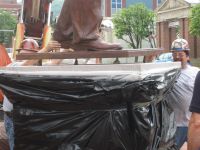 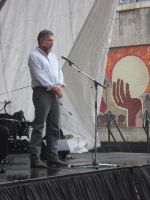 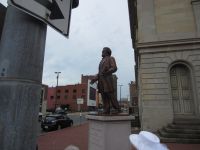 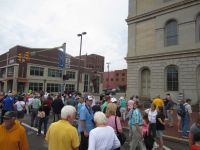 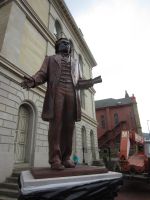 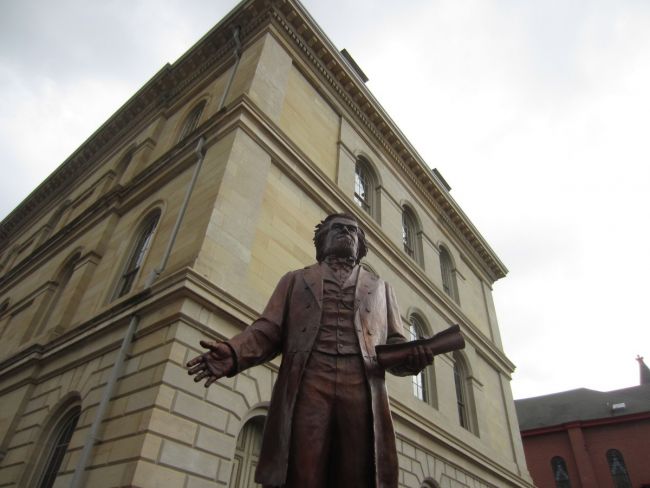 The materials on this website may be freely used by non-commercial entities for educational and/or research purposes as long as credit is given to the Ohio County Public Library, Wheeling WV. Content within these pages cannot be reproduced in any format for profit or other presentation without the permission of The Ohio County Public Library. To obtain permission to publish these images, contact us through our Ask a Librarian form.