PEOPLE'S UNIVERSITY: Fairy Tales for Grown-Ups - Class 2: Toward a Theory of the Fairy Tale as a Literary Genre 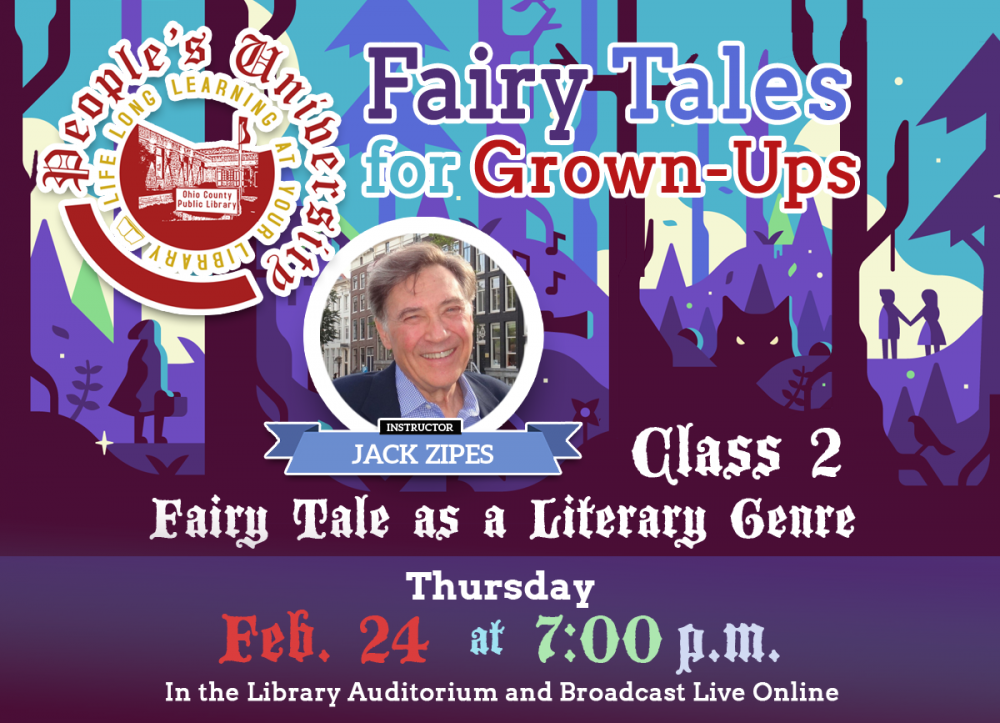 Class starts at 7:00 pm in the Library Auditorium. This program will be available to watch live on Facebook Live, on YouTube, and on the OCPL website's People's University: Fairy Tales for Grown-Ups.  Log into your Facebook or YouTube account during the program to leave questions for Professor Zipes in the comments box. He will answer them during the live broadcast.

FEATURED BOOK:
The Irresistible Fairy Tale: The Cultural and Social History of a Genre,  by Jack Zipes. (Princeton University Press, 2012)
[Reserve a copy from the Library  |  Check out the ebook with your OCPL library card through WVDeli or HooplaDigital  |  Purchase a copy online through bookshop.org to support local book stores or visit indiebound.org to find The Irresistible Fairy Tale in a bookstore near you.  |  Purchase online through Amazon ]

If there is one genre that has captured the imagination of people in all walks of life throughout the world, it is the fairy tale. Yet we still have great difficulty understanding how it originated, evolved, and spread—or why so many people cannot resist its appeal, no matter how it changes or what form it takes. In this book, renowned fairy-tale expert Jack Zipes presents a provocative new theory about why fairy tales were created and retold—and why they became such an indelible and infinitely adaptable part of cultures around the world. Drawing on cognitive science, evolutionary theory, anthropology, psychology, literary theory, and other fields, Zipes presents a nuanced argument about how fairy tales originated in ancient oral cultures, how they evolved through the rise of literary culture and print, and how, in our own time, they continue to change through their adaptation in an ever-growing variety of media. In making his case, Zipes considers a wide range of fascinating examples, including fairy tales told, collected, and written by women in the nineteenth century; Catherine Breillat's film adaptation of Perrault's "Bluebeard"; and contemporary fairy-tale drawings, paintings, sculptures, and photographs that critique canonical print versions. While we may never be able to fully explain fairy tales, The Irresistible Fairy Tale provides a powerful theory of how and why they evolved--and why we still use them to make meaning of our lives.

Drawing on cognitive science, evolutionary theory, anthropology, psychology, literary theory, and other fields, this book presents a nuanced argument about how fairy tales originated in ancient oral cultures, how they evolved through the rise of literary culture and print, and how, in our own time, they continue to change through their adaptation.

➤ View all ebooks by Jack Zipes available online through Hoopla