New Home of the Germania Half Dollar Savings Opens, July 3, 1917

-from The Wheeling Intelligencer, Tuesday, July 3, 1917

New Home of the Germania Half Dollar Savings Opens

A cordial invitation is extended to the public to attend and see our splendid new home. 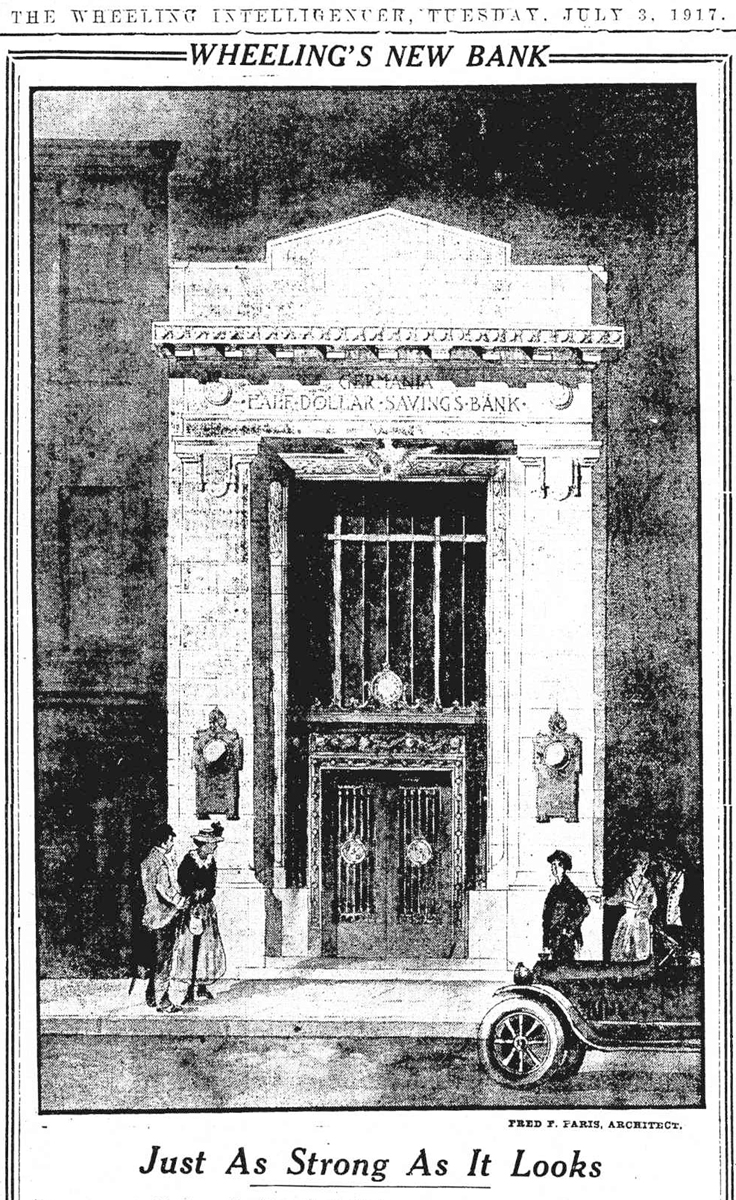 Wheeling's new banking house, the home of the Germania Half Dollar Savings bank, corner of Market and Fifteenth street, city, is ready for business, and this evening the general public will be given an opportunity to call and inspect this fine new banking house, which is a credit to the Wheeling district. The bank was designed by Fred F. Faris, who has drawn the plans for many of the finest banks in the Wheeling district.

The bank is located on the southwest corner of Fifteenth and Market streets and extends back to Alley B in the rear. It occupies the site of the old Reymann brewery, which was later the Wheeling Majority building, and also the old building on the corner. It is the very latest in architecture and strictly modern in every respect.

The building is the regulation type, but one story in height, but this story of course is as high as two ordinary building stories. It is strictly fireproof throughout and is as modern as money and skill can make it. The front is of granite and terra cotta. The doors are of bronze and the entrance is very ornate.

The interior of the building is made up of one spacious room, extending from the street front to the alley in the rear. The room is finished in marble wainscoting. The ceiling is centered by a large dome skylight. The alley wall has no windows and the entire lighting of the bank will be furnished by the spacious dome in the ceiling.

In the extreme rear there is a large concrete vault, reinforced with railroad iron. It is strictly burglar and fireproof and includes scores of safety deposit vault sections. The vault is equipped with the latest type bank vault door, a massive circular affair of steel, and equipped with intricate mechanism.

Extending towards the front from this vault are the bank offices, the spaces for the cashier, tellers, president and secretary, directors' room, etc. These arc of marble walls with ornamental bronze grating. Desks and other conveniences for patrons are located throughout the main bank lobby.

Through years of struggles the bank has risen to foremost ranks until it is considered one of the strongest financial institutions of the country, its deposits have grown with rapidity and its semi-annual dividends were received by stockholders as regularly as clockwork. The bank has been located temporarily, during the construction of its new home, in the adjoining former Quarter Savings bank room.

With the above named officers the Germania Half Dollar Savings bank is sure to grow and promises to be one of the leading banks of the state. Its depositors are the very best people in the Ohio valley and it has gained a wide reputation through honest dealings with all. It is another monument in the field of progress and advancement in the Wheeling district.