➤ Eddie Martin was born on March 26, 1922, the youngest child of Louis and Elizabeth (Schoen) Martin. The Martins, who had two other children, Robert (October 12, 1917-November 24, 1982) and Gertrude (June 11, 1915-August 17, 2006), lived in North Wheeling and were active parishioners at the Sacred Heart Church on North Main Street. All three children attended Sacred Heart School. Martin expressed an early affinity for photography and, in 1944, began an apprenticeship under Wheeling photographer George Kossuth, whose studio was located at 807 N. Main Street. While working with Kossuth, Martin befriended the famed opera singer Eleanor Steber and quickly became her favorite colorist. Eddie was born with a physical disability – a spinal disfigurement that caused a hunched back and shortened stature. Upon the death of his mentor, Martin went on to work with another noted Wheeling photographer, Charles F. Gruber. While working with Gruber and then later under his own imprint, Martin began to collaborate with the Diocese of Wheeling-Charleston and often served as the official photographer at many of the parish schools and their related functions. Eddie Martin died on March 25, 1988, and is buried in Mt. Calvary Cemetery. Family friend Bill O’Leary received the majority of Martin’s photographs and other papers through Gertrude Martin’s estate after her death.

The collection consists mainly of photographs depicting people and places in Wheeling, WV from 1950-1988. The majority of the photographs were taken by Eddie Martin from the early 1940s through the 1980s. Noteworthy examples include those depicting the visit by then presidential candidate John F. Kennedy in 1960 as he drove through North Wheeling and others documenting the many parades and celebrations held by the city on behalf of the men and women serving overseas in World War II. Also of note are the numerous aerial shots of downtown Wheeling which show the growth of a city in the 1940s and 1950s as well as the later repercussions of urban renewal and the economic downturn. The collection includes several folders of photographs that document the construction of the Ft. Henry Bridge which opened to traffic in 1955. Martin also had a propensity to document disasters, and there are many photographs of neighborhood fires, automobile crashes and, of course, the various floods he witnessed in his lifetime. Other noteworthy selections include the many scenes at Oglebay Park in the 1950s, as well as the photographs of Eleanor Steber.

The collection also includes a substantial amount of historical photographs that pre-date both Martin and O’Leary, who were both avid photograph collectors. Examples include an original photograph documenting the dedication of the Soldiers and Sailors Monument on May 30, 1883, the McLure Hotel circa 1897, and early 20th century images of steamboats docked at the Wheeling Wharf. The collection also includes material related to George Kossuth, including photographs taken by him, photographs of his studio, and his noteworthy Christmas Greetings cards. 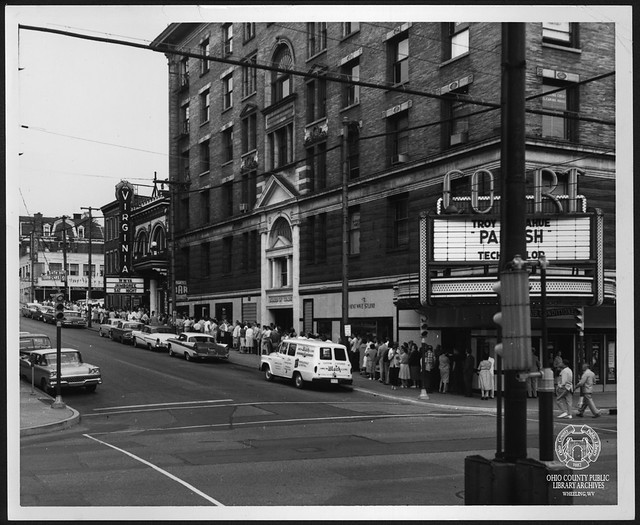