➤ Thelma Irene Shull was born on July 30, 1906 in Moundsville, WV to Jackson Willis Shull (1880-1952) and Caroline Forsh (1879-1930). From 1908 to 1933 the family lived at 509 Market Street, then moved to 110 North 16th Street in Warwood. Thelma attended Washington Grade School, Wheeling High School, and graduated from the Elliott School of Business in Wheeling. From 1924 until 1929, Thelma worked for the Sterling Drug Company on 19th Street. During her time of employment, she bought stock in the new company. In late 1929, Thelma began working for the Wheeling Electric Company, where she met August J. Hoffman. They married on August 16, 1936 in Allegheny County, PA.

After Thelma and A.J. Hoffman married in 1936, they resided at the Virginia Apartments until moving to a property on GC & P Road near the Sandscrest property. The Hoffmans traveled often, visiting New York and Chicago, among other destinations. A.J. Hoffman died on August 9, 1952 of acute lymphatic leukemia. In 1969, Thelma began construction of a ranch-style home on their property and rented the older structure to friends. Mrs. Hoffman’s investments in Sterling Drug Company, and later American Home Products, significantly increased in value over the years. Betty Huffman, the first fully registered female broker in West Virginia, handled her investments. Thelma Hoffman died on February 2, 1999 and is buried in Greenwood Cemetery in Wheeling, next to her husband. The August J. Hoffman and Thelma S. Hoffman Foundation was established in 1999 to continue Thelma's commitment to philanthropy and enrich the community in which she and her family lived.

The Thelma and A.J. Hoffman collection consists of their family papers, including correspondence, photographs, ephemera, selected financial material, and other items. Of note are family photographs in addition to photographs of employees at Sterling Drug Company and Wheeling Electric Company in the 1920s and 1930s. Correspondence includes letters from A.J. Hoffman to Thelma, dated 1930s-1940s.

Selected photographs from the collection: 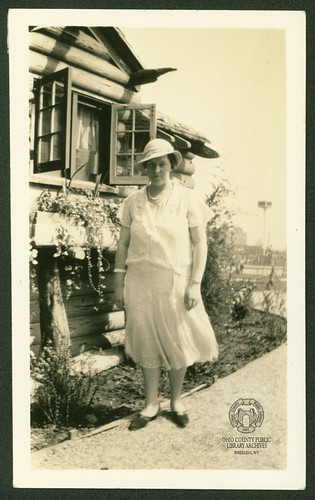