Beverly M. Eoff, until within the last few years a resident of this city, died about four o'clock yesterday morning at his home at Woodlands, a pretty county place on the Ohio, in the lower part of Marshall county. He was in his sixty-fourth year. The funeral will take place to-morrow morning at 10:30 o'clock from the residence of his brother, Alex, on Main street, just north of Twenty-fourth.

The deceases had been confined to his room by sickness for some time past but it was not supposed the end was so near even by some of his immediate family. Here in the city it was generally supposed by his friends who knew that he was ill that the ailment was on from which his sturdy constitution would soon recover. To those the news of his death comes with the force of surprise.

Mr. Eoff until the time he removed his family to Woodlands was one of the best known of Wheeling's prominent people. He was always clever and courteous in his intercourse with the world and his genial presence will be sadly missed. He was a business man of energy and was fairly successful in everything he undertook. He leaves a grown up family. 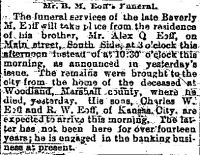 The funeral services of the late Beverly M. Eoff will take place form the residence of his brother, Mr. Alex. O. Eoff, on Main street, South Side, at 3 o'clock this afternoon instead of at 10:30 o'clock this morning, as announced in yesterday's issue. The remains were brought to the city from the house of the deceased at Woodland, Marshall county, where he died, yesterday. His sons, Charles W. Eoff and R. W. Eoff, of Kansas City, are expected to arrive this morning. The latter has not been here for over fourteen years; he is engaged in the bank business at present.