TO-DAY the State House becomes the City Hall. As soon as the wreck can be put in order the new tenant will move in. There is plenty of room for the county, and the county ought be glad to take up its official residence there.

THE capital of West Virginia is Charleston, beautifully situated on the picturesque Kanawha. The State House sails to-day on the commodious steamer Chesapeake.

IF the State Administration wants a little fun, it might stop at Parkersburg on the way down. There is fine talent at Parkersburg.

AND THE STATE ARCHIVES GOING.

Charleston Gets the Seat of Government and Wheeling a Handsome City Hall.

The State House Dismantled and the Steamers About to Sail.

For the Second time in the existence of the State of West Virginia Wheeling to-day loses the distinction of appearing in the geographies designated by a star. Hereafter she will be a simple round dot. In other words, Wheeling last evening at the close of business ceased to be the Capital of the Mountain State, and on and after to-day Charleston will be the permanent seat of government and people having official business with any of State departments, if unfortunate enough to live anywhere but in the southern end of the State, will be obliged to go out of the State to get to the Capital. The State archives, Government and State House furniture has all been loaded upon the steamer Chesapeake and the model barge Nick Crawley. The latter is packed to its utmost holding capacity. The Belle Prince, having the barge in tow, will leave the wharf this morning at an early hour for Charleston. The Chesapeake, bearing Governor Wilson, Auditor Duffey, Treasurer Thompson, Superintendent of Free Schools Morgan and Secretary of State Walker, and the Great Seal of the State, will depart at 10 a.m. The clerks and a few outsiders, in all about twenty-five gentlemen, will also be passengers. 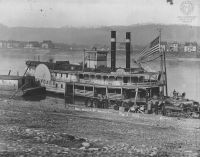 Capt. Billy Prince will command the Chesapeake and Capt. Kuglen the Belle Prince. Large canvas signs will decorate the sides of the barge and steamers, to inform the natives along the Ohio and Kanawha that this is the West Virginia Capital in transitu.

There has been considerable talk about the thorough manner in which the State House has been dismantled. Some surprise has been expressed that the door were left, and it is frequently remarked that the city should be grateful that her building is left. Much of this [? illegible] is without cause, but it is rather surprising that the shelving was taken from the vaults. The pine boards will not anything at Charleston, and will doubtless be used for kindling wood there. Left in the vaults they would have saved the city some expense.

Hereafter the State House is the City Hall. The city probably gains more substantial good than she loses.

Apportioning its Space Among the Various Officials

Yesterday morning, the special Council committee appointed to arrange for occupying the State House building, met there for the purpose of apportioning the rooms off for the various city departments and ascertaining what would be necessary to have done in order to make the place habitable.  Those present were Messrs. Myles (chairman), Dobbins, McGregor, Gruse and Peterson.  Mr. Shanley was absent.

This distribution of rooms was made with the hope that the county will decide to occupy the north half of the building. In case it should absolutely refuse to do this there would probably be changes made in the above plan. The idea is, to have the city in its new quarters by July 15.

The first thing to be done will be to have the building given a thorough sweeping and dusting from top to bottom, and this should be done two or three time to be thorough. The committee will recommend that this be done by the chain gang. It will also ask for $5,000 to be used in further cleaning furnishing the building. The money for scrubbing and otherwise cleaning and repairing the building can probably be had out of the $10,000 appropriated by the State, as Governor Wilson says he will endorse any requisition made on him by the Board of Public Works for this purpose. And in this connection it may be state that there are repairs necessary to the roof that should be made at once.

The committee will ask to be authorized to receive bids for furnishing the offices. Among other things that it is proposed to purchase is a chair and desk for the Mayor, something with which that official has not been furnished by the City in the past. Where he will put it is not specified.

Before occupying the building it will be necessary to amend several ordinances providing where the lockup and Municipal Court and Council shall be.

Considerable unfavorable criticism was heard yesterday the apportionment of the rooms. It is the idea of the committee to cut off the south third of the Auditor’s office and thus make a room for the Gas Trustees, and enclose the rest of that large room so as to leave a small vestibule as one enters the room. The room not used by the Trustees is designed to accommodate the Clerk and Receiver. This is cramping these officials. On the other hand, across the hall, the large room occupied by the Treasurer is given up to the Clerk of the Municipal Court and the police force, and the two good sized rooms of the Superintendent of Schools to the Chief of Police. These two rooms would be exactly adapted to the use of the Gas Trustees and the Clerk and Receiver, together with the Mayor and Solicitor should have all of the Auditor’s office. There should be no partition in that room.

The Treasurer's large office is fully ample to accommodate the Chief, his force of nineteen men and the Clerk. lf the city had a force of one hundred men with a reserve of twenty or so always at the Hall, there would be some excuse for devoting three large rooms to their use.