The Wheeling Terminal Railway bridge spanning the Ohio River from Wheeling to Martins Ferry was built between 1890 and 1891. The bridge crossed the river near Madison St. in Martins Ferry and hit the banks of the Wheeling side of the river just north of 1st Street in North Wheeling. The bridge was designed by Job Abbot, a consulting engineer for the Wheeling Bridge and Terminal Railway Company, and built by the Edge Moor Bridge Works of Wilmington, Delaware.

"THE WHEELING, W. VA., BRIDGE AND TERMINAL SYSTEM. The bridge and belt line system of railways, illustrated in this issue (see image to right - click to enlarge), at Wheeling, W. Va., are approaching completion. First there was to be a line from Cornelsville to Wheeling. Second, a line from Bowerston, Ohio to Wheeling. Third, a double-track bridge over the Ohio at Wheeling. Forth, a belt line of road around the city of Wheeling, and connecting with every road in the city. All these things were to be built on the union principle—that is, any road wishing to do so might use all or any part of any of the lines or the bridge for a certain rental per annum, or per car of freight transported. The forty miles of road from Wheeling to Bowerston are to tap a dozen short lines now running from the lake to points within easy distance from the new union line and bring them all to Wheeling. The prime feature of the system is, however, to connect the city of Wheeling with Martin's Ferry, just across the river, and bring all the lines that end there now into the city and furnish for them independent switching facilities and terminal connections. The main system includes ten and one-half miles of track, beginning at the upper end of Martin's Ferry and continuing across the river, through three tunnels to the extreme south of Wheeling, and connecting with the Wheeling & Lake Erie, Pittsburgh, Wheeling & Kentucky, Cleveland, Lorain and Wheeling, Cleveland and Pittsburgh, Ohio River, Baltimore & Ohio, and Panhandle railroads. The three tunnels are 537 feet, 1,203 feet, and 2,406 feet long, respectively. The Ohio is crossed by a bridge 2,097 feet, long, double-track throughout and built with five spans, one 152 feet long, one 525 feet long, and three 250 feet long. The approaches are 317 feet and 353 feet, respectively."

- from the Engravings Collection of the Ohio County Public Library Archives.
▶ view pdf file of entire "Once a Week" page from February 3, 1891 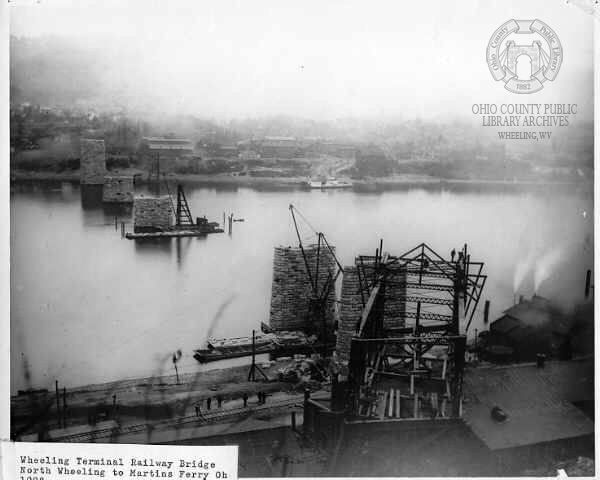 Views of the Terminal Bridge from Belle Isle, circa 1914

Demolition of the Terminal Bridge