- from Pioneer Life in the West; comprising the adventures of Boone Kenton Brady Clarke....Philadelphia, The Keystone Publishing Co., 1890. p. 144-156. 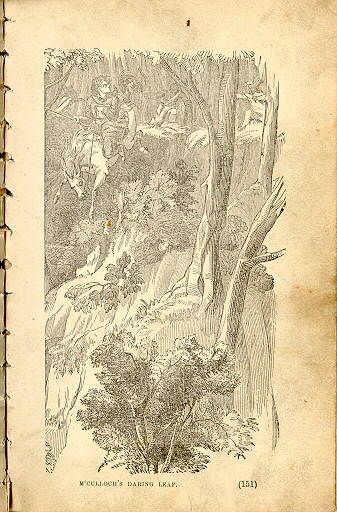 We presume there are but few, if any, among our readers who are not familiar with the exploit of Putnam, in riding his horse down the steep declivity at Horseneck, in the endeavor to escape from the British troops. It is "famed in story;" has been illustrated time and again by the pen and pencil; has been dramatized, and in every conceivable form, presented to the public eye, until the merest schoolboy is as familiar with the incident as with his alphabet. Yet it is by no means comparable with the feats of a similar character, performed by men of less notoriety, but of equal strong nerve and desperate courage, which have not attracted a tithe of the admiration and eclat which have been vouchsafed to Putnam's exploit.

At the siege of Fort Henry, near Wheeling, by a band of Indians, under the infamous Simon Girty, Major Samuel McCulloch performed an act of daring — nay, desperate horsemanship — which has seldom been equaled by man or beast, and before which the effort of the Pomfret hero pales into insignificance. Let us turn to the record.

Fort Henry, situated about a quarter of a mile above Wheeling creek, on the left bank of the Ohio river, was erected to protect the settlers of the little village of Wheeling, which, at the time of its investment, consisted of about twenty-five cabins. In the month of September, 1775, it was invested by about four hundred warriors, on the approach of whom the settlers had fled into it, leaving their cabins and their contests to the torch of the savages. The whole force comprising the garrison consisted of forty-two fighting men who know the use of the rifle, and who were celebrated throughout the borders as the implacable enemies of the red man, and as the best marksmen in the world. Of these however, more than one-half perished in an ill-advised sortie before the siege commenced, and when the fort was surrounded by the foe, but sixteen men remained to defend it against their overwhelming numbers. — But their mothers, vices and daughters were there, and nerved the Spartan band to deeds of heroism to which the records of the wars of ancient and movern history present no parallel. Here it was the Elizabeth Zane passed through the fire of the whole body of redskins in the effort to ring into the fort the ammunition so ncessary to its defence; —here it was, also, that the wives and daughters of the noble defenders marched to a spring in point blank range of the ambuscaded Indians, in going to and fro, for the purpose of bringing water for the garrison.

Messengers had been dispatched, at the earliest alarm, to the neighboring settlements for succor, and, in response to the call, Captain Van Swearingen, which fourteen men, arrived from Cross Creek and fought his way into the fort without the loss of a man. Soon afterwards, a part of forty horsemen, led by the brave and intrepid McCulloch, were seen approaching, and endeavoring to force their way through the dense masses of Indians which nearly surrounded the station. Their friends within the fort made every preparation to receive them by opening the gates, and organizing a sortie to cover their attempt. After a desperate hand-to-hand conflict, in which they made several of the Indians bite the dust, they broke through the lines, and entered the fort in triumph, without the loss of an individual. All, except their daring leader, succeeded in the effort. Her was cut off, and forced to fly in an opposite direction. McCulloch was as well know to the Indians as to the whites for his deeds of prowess, and his name was associated in their minds with some of the most bloody fights in which the white and red men had contended. To secure him alive, therefore, that they might glut their vengeance upon him, was the earnest desire of the Indians, and to this end they put forth the most superhuman exertions. There were very few among their number who had not lost a relative by the unerring aim and skill of the fearless woodsman, and they cherished toward him an almost frenzied hatred, which could only be satisfied in his tortures at the stake.

With such feelings and incentives, their crowded around him as he dashed forward in the read of his men, and succeeded in cutting him off from the gate. Frinding himself unable, after the most strenuous exertions, to accomplish his entrance, and seeing the uselessness of a conflict with such a force opposed to him, he suddenly wheeled his horse and fled in the direction of Wheeling Hill at his utmost speed. A cloud of warriors started up at his approach, and cut off his retreat in this direction, driving back upon another party who blocked up the path behind; while a third closed in upon him on one of the other sides of the square. The fourth and open side was in the direction of the brow of a precipitous ledge of rocks, nearly one hundred and fifty feet in height, at the foot of which flowed the waters of Wheeling Creek. As he momentarily halted and took a rapid survey of the dangers which surrounded him on all sides, he felt that his chance was inded a desperate one.

The Indians had not fired a shot, and he well knew what this portended, as they could easily have killed him had they chosen to do so. He appreciated the feeling of hatred felt towards him by the foe, and saw at a glance the intention to take him alive if possible, that his ashes might be offered up as a sacrifice to the manes of their friends slain by his hand. This was to die a thousand deaths, in preference to which he determined to run the risk of being dashed in pieces; and he struck his heels against the sides of his steed, who sprang forward toward the precipice. The encircling warriors had rapidly lessened the space between them and their intended victim, and, as they saw him so completely within their toils, raised a yell oftriumph, little dreaming of the fearful energy which was to baffle their expectations. As they saw him push his horse in the direction of the precipice, which they had supposed an unsurmountable ostacle to his escape, they stood in wonder and amazement, scarcely believing that it could be his intention to attempt the awful leap, which was, to all appearances, certain death.

McCulloch still bore his rifle, which he had retained, in his right hand, and carefully gathering up the bridle in his left, he urged his noble animal forward, encouraging him by his voice, until they reached the edge of the bank, when, dashing his heels against his sides, they made the fearful leap into the air. Down, down they went with fearful velocity, without resistance or impediment until one-half the space was passed over, when the horse's feet struck the smooth precipitous face of the rock, and the remainder of the distance was slid and scrambled over until they reached the bottom alive and uninjured. With a shout which proclaimed his triumphant success to his foe above him, McCulloch pushed his steed into the stream, and in a few moments horse and rider were seen surmounting the banks on the opposite side.No pursuit was attempted, nor was a shot fired at the intrepid rider. His enemies stood in awe-struck silence upon the brow of the bank from whence he had leaped, and, as he disappeared from their view, they returned to the investment of the fort. They did not long continue their unavailing efforts, however, for its capture; the numerous additions it had received to its garrison; the fearlessness exhibited in its defence, together with the feat they had witnessed, disheartened them, and they beat a hasty retreat on the morning after the event I have attempted to describe —not however, until they had reduced to ashes the cabins without the stockade, and slaughtered some three hundred head of cattle belonging to the settlers.