Lunch With Books: From the Vault 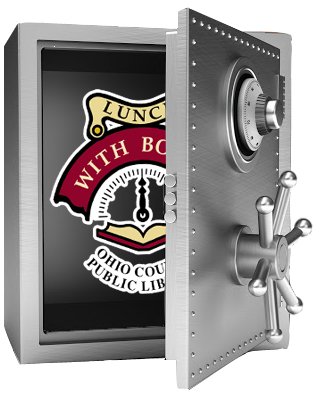 OCPL has started an initiative to release a new "Lunch With Books from the Vault" every Tuesday since the closing of the Library on March 15, 2020, due to concerns over the potential spread of the coronavirus COVID-19.

Make sure to follow Lunch With Books at the Ohio County Public Library for additional video programs and news updates.

LUNCH WITH BOOKS: "FROM THE VAULT"

The United States detonated two nuclear weapons over the Japanese cities of Hiroshima and Nagasaki on August 6 and 9, 1945, respectively. As a recognition of the 75 years since the bombing, we offer this Lunch With Books from the vault in which both an American and a Japanese view of the political, diplomatic, and military currents that influenced Japan's attempts to surrender and the United States's decision to drop the atomic bombs were discussed.

Tuesday | July 30, 2020
From the Vault: "The USS Indianapolis - A Survivor's Story" with Wheeling's own Paul McGinnis. Originally presented on September 25th, 2007

Lunch With Books was very honored to host Wheeling resident and distinguished WWII veteran Paul McGinnis back in 2007. A large audience assembled to hear a harrowing and touching story of survival.

Mr. McGinnis also shared his survival story in the form of an oral history. His interview, conducted by Sean Duffy and Jeff Rutherford at the Ohio County Public Library, April 26. 2011, is now a part of the Wheeling Memory Project.

Ron Miller presented a program on the Ye Olde Alpha restaurant and bar at LWB back in 2008. Mr. Miller, whose family owned The Alpha for over 70 years, shared the storied history of the legendary Wheeling establishment with LWB attendees.

This week, in time for July 4, Independence Day, we offer a program from the People's U video vault. Dr. Richard Owens, Professor of History, West Liberty University, covered the "American Revolution" for the People's University series, American History 1, which surveyed the important events and people of the pre-colonial, colonial, and Founding periods.

In 2010, Stuart Bloch joined us to discuss the history of his family’s world-famous business: Bloch Brothers Tobacco Company, makers of stogies and Mail Pouch chew, a product famously promoted with iconic, painted barns that still dot the U.S. landscape.

In Sept. 1, 1939, Nazi Germany invaded Poland, and World War II officially began. Western technological advances had brought about the most destructive war in human history as the Axis nations (Nazi Germany, Fascist Italy, Imperial Japan) fought the Allied nations (Great Britain, the Soviet Union, and later, the U.S.) in the European, the Pacific, and the Mediterranean, African & Middle East Theatres. The pivotal Battle of Normandy, beginning with the June 6th D-Day invasion in 1944, marked the beginning of the end of war in Europe.

Tuesday | June 2, 2020
From the Vault: "A Look at Our Past...A Glimpse Into Our Future" with Diana L. Bell, LSW, Racial Justice Director at the YWCA in Wheeling. Originally presented Tuesday, February 23, 2010.

In her opening statements in this week's Lunch With Books From the Vault from 2010, Diana Bell, then Racial Justice Director at the YWCA in Wheeling, states "Those who forget the past are doomed to repeat it." Her presentation, “A Look at our Past...A Glimpse into our Future,” gave an overview of African American History in the United States and the microcosm of Wheeling as well. In dialogue with the audience, she talks about the fact that, even in Wheeling, there is a need for African American parents to give their children instructions on how to interact in the community for safety, how "separate but equal" was never equal, and the necessity to create an even playing field to move forward in the movement to eliminate racism. Ten years later, it is disheartening to see that we are still, as a nation, dealing with issues we should have resolved long ago. As an institution whose mission is to provide free and equal access to resources to everyone in our community, the Ohio County Public Library stands in solidarity with those working to combat inequality and institutionalized racism. Let's learn from history and not just hope for, but create a better future.

Captured by the Japanese following their conquest of the Philippines in 1942, thousands of American military personnel died while imprisoned under horrific conditions. The American Defenders of Bataan and Corregidor Museum, located in the Brooke County Library in Wellsburg, WV, is the official national archive, designated as such by the ADBC, of artifacts and documents donated by the survivors and their descendants. Museum Curator Jim Brockman gave a history of the Bataan Death March and shared artifacts from the ADBC Museum.

The Ohio County Public Library opened its current location at 52 16th Street in Wheeling, WV on May 19, 1973. Back in 2013, celebrating the upcoming 40th anniversary of the door opening at 16th Street and as part of our National Library Week celebration, the Library hosted a special Friday program devoted to the most cherished memories of the OCPL or any library that impacted our patrons' lives. Hosted by West Virginia Poet Laureate Marc Harshman, memories, poems, and other writings about the importance of libraries and the love of reading were shared. Even WV Governor Tomblin sent us a special message just for this event!

To get the Lunch With Books crowd in the Cinco de Mayo mood, the Diamante Trio visited us at the Ohio County Public Library, Tuesday, May 1, 2018, serenading us with the Latin American spirit. Pittsburgh Opera Orchestra and Westmoreland Symphony musicians form this ensemble that features all styles of music from Latin America. Brazilian songstress Lilly Abreu, also from Pittsburgh Opera, sang in English, Spanish, and Portuguese and shared information about the languages, the songs, and the composers in this Lunch With Books Cinco de Mayo treat.

Joseph A. Tellitocci of Boggs Run, Benwood, WV has done extensive research on the Benwood Mine Disaster of April 28, 1924 in which 119 men— mostly Polish, Italian, and Hungarian immigrants— lost their lives. Among those killed was Istvan (Stephen) Vargo, Mr. Tellitocci’s great-grandfather.

On April 21, 1865 the steamer Sultana left New Orleans with 2000 men on board. Most were Union soldiers that had been released from Confederate prison camps. The U.S. Government had contracted the boat to return the men to their homes in the North. Several of those men were from Wheeling. At 2 a.m. on April 27, the boilers exploded killing 1,547 men. The boat's legal capacity was 376. Through pictures and words, the Library's great friend, Kate Quinn (February 25, 1946 - January 22, 2018), told the moving story of the Sultana Disaster.

At 10:05 pm, April 14, 1865, Abraham Lincoln, the 16th President of the United States, was assassinated by well-known stage actor John Wilkes Booth while attending the play "Our American Cousin" at Ford's Theatre in Washington, D.C. 150 years later, Tuesday, April 14, 2015, we honored Lincoln at Lunch With Books at the Ohio County Public Library, Wheeling, WV, with a program of reflections on the life, death, and legacy of the 16th president in poetry, song, and dance.

Author David Giffels joined us at Lunch With Books at the Ohio County Public Library, July 2, 2014, to discuss his book "The Hard Way on Purpose," a collection of linked essays about the quirky, hard-bitten cultural landscape of the Rust Belt and the people who thrive there.

Today we're stepping back in the time machine to Valentine's Day, 2017, to bring back one of our highest attended programs (220 people!) Please enjoy George Sidiropolis, author and researcher of the book "Murder Never Dies" talking about "Crime and Corruption in the Friendly City."

We thought everyone might like a little "sentimental journey" while we're all practicing our social distancing, so we took things back to July 3, 2018 when the fantastic Ladies for Liberty visited us for a very nostalgic and patriotic Lunch With Books.

➤ Like Lunch With Books on Facebook to keep up with all the latest LWB news and events!