by Kate Quinn and Seán Duffy

“Avalon will always be there for all men to find if they can seek the way thither, throughout all the ages past the ages. If they cannot find the way to Avalon, it is a sign, perhaps, that they are not ready.”― Marion Zimmer Bradley, The Mists of Avalon

What if I told you that you could see camels, ride a roller coaster, visit a German beer garden, fly to the North Pole in an airship, roller skate, dance, travel to Damascus, and take in Vaudeville shows all in the middle of the Ohio River near Warwood? Would you believe me? Well, during a long ago summer, you could do all of those things and more, on a magical little island dubbed “Coney.”

June 1905. The middle of the Progressive Era. A period of reform, modernization, and great optimism. People worked hard and expected to play hard, demanding a new level of innovation and sophistication in leisure and amusements to match the new, scientific approach to business. And groups like the Wheeling Amusement Company were formed to meet those demands.

Teddy Roosevelt was in the White House, Norway dissolved its union with Sweden, Christy Mathewson pitched a no-hitter for the New York Giants, 450 people attended the grand opening of the world’s first nickelodeon in Pittsburgh, and more than six thousand people attended the grand opening of Coney Island – no, not in New York – but in Wheeling, West Virginia.

Of course, Wheeling had other amusement options during the era, including Wheeling Park, the State Fair Grounds “Amusement Zone” on Wheeling Island, the Belle Isle bathing beach at the north end of the Island, and Mozart Park, but nothing quite like what was imagined for Coney Island.

As researcher Kate Quinn pointed out in her recent Lunch With Books program at the Ohio County Public Library [see video of the program at the end of this post], Wheeling’s Coney Island “pleasure resort” was constructed by the Wheeling Amusement Company at a cost of $100,000 ($2.7 million in 2015 money) on the 19 acre lower Twin or Sisters Island, the largest of three sandy river islands once located just south of where the Pike Island Dam is now. According to the January 2, 1905 Fairmont West Virginian, a cafe and dancing pavilion (but nothing more) had already been built on the island before the Wheeling Amusement Company purchased it for $6000.

In addition to the features listed above, the ambitious plans (created in part by an engineer who helped design the layout for the 1904 St. Louis World’s Fair) called for amusement park attractions like a circle swing mounted on a 95 ft. tower with cars on each arm that would hold up to 12 people as it swung high above the island, a merry-go-round, Bump the Bumps, Shoot the Chutes, “Streets of Asia,” a Turkish Theatre, an “Arctic Slide,” an exhibit called “Across the Rockies,” a Ferris wheel, a photo gallery, and a stadium that would hold 2500 people for operas and circuses. Down the center of the island there was to be a paved road 40 feet wide, and the length of the island, called the Court of Honor, and in the center, a ninety five foot “Great Electric Tower,” to be lit by 20,000 electric lights, with an attached, 125 foot “Slide for Life.”

Jun 10, 1905 advertisement in the Intelligencer.

Regular concerts at the Court of Honor were to be performed by the Boston Ladies Military Band, acquired for a portion of the summer at great expense. The Mayer’s Greater Orchestra was also to perform a concert, and the daring Miss Oneida would brave the Slide for Life from the top of the electric tower to the ground below “on a cable 1000 feet in length,” and then perform a trapeze act with her partner Delmore at the top of the tower.

Vaudeville acts at the German village theatre were to include the Wheeler Sisters, “petite, winsome, chic, pretty and charming child artists” known nationally for their singing and dancing, and, “direct from Coney Island New York,” the Chatham Sisters, “acrobatic singers, dancers, and elite entertainers.” Additional acts would include “European novelty contortionist” Faybio; the “eccentric juggling comedian,” Professor Delmo; singers and conversationalists Charles E. Inness and Maude S. Ryan; monologist Ingram Kyle; skit comedians Fentelle and Radcliffe in the “side-splitting” farce, “The Tramp and the Bell Boy;” and the Felton Brothers, “bag punchers and club swingers of wonderful ability.” To top it all off, new moving pictures were to be shown “by the Edison moving picture machine.”

Plans for the north end of the island included an apple orchard to be used as a picnic area and a bathing beach with lights for night swimming. There was also to be an Egyptian attraction, including a village with camels, donkeys, and elephants and featuring demonstrations of Egyptian wedding ceremonies.

All buildings were to be fireproofed and well lit, all trees on the island were to be removed, and the island was to have a wall surrounding it, with guardsmen at each of the four gates. “They [the owners] hope to have a highly respectable resort,” The Fairmont newspaper reported, “and will not permit of any rowdyism or improper conduct on the grounds.” Construction began in February of 1905 and proceeded rapidly.

“In all parts of the country, The May 31, 1905 Fairmont West Virginian reported, “there are parks and amusement resorts, but none can compare with that on Sister’s [sic] Island in the beautiful La Belle Riviere a short distance from Wheeling, where for the past five or six months there has been an army of workingmen, busy as the proverbial beaver, getting the buildings and structures in shape for the grand opening… Like Phoenix rising from the ashes has the wonderful amusement city at Coney Island Park arisen from the barren waste of which the island was composed until the master hand of the Wheeling Amusement Company took hold, and now it has been transformed into one of the beauty spots of the great valley…” The newspapermen were given a tour and saw the stable where the camels were kept. They could hear the “sound of hammers…on every side putting the finishing touches…” on the park.

A June 10 grand opening was advertised.

Surprisingly, the actual park ended up being built very much according to plan. Though no actual photographs are known to exist, a 1906 Sanborn Fire Insurance Map held in the archives at the Ohio County Public Library provides the best evidence for the final layout. The map shows most of the features listed above and also includes a restaurant and a site for a proposed casino.

Though not shown on the Sanborn Map, Coney Island apparently did have a Ferris wheel. According toFerris Wheels: An Illustrated Historyby Norman D. Anderson, Ferris Wheel builder Charles Isleib of Patterson, New Jersey, built wheels around 1906 in three sizes: 35, 45, and 60 feet. A sales brochure issued by Isleib’s company indicates: “My wheels have been approved and most highly recommended by the Managers and owners of the following parks where the wheels have been situated…” Included in this list is “Wheeling, Coney Island, West Virginia.”

Initial plans for a family-friendly, alcohol-free island were apparently abandoned, as a German beer garden is prominent on the Sanborn Map. In fact, According to a May 9, 1960 Wheeling Intelligencer article about plans to dredge the (smaller) Upper Twin Island, the Uneeda Brewing Co. sponsored the park. Indeed, an early county map from the library’s collection supports this. Despite the copyright date of 1918, the content of this map almost certainly predates the state prohibition law, enacted in 1914, that forced Wheeling’s great breweries out of business (and forced Uneeda into baking soda crackers).

Even with beer available, efforts were made to market the park as an excursion and picnic destination for churches and Sunday schools as well as unions, and “secret societies.”

Access to Coney Island was provided, at various times, by steamboat, “steam road,” trolley, barge, ferry, and bridge. According to the June 10, 1905 Wheeling News-Register, arrangements were made with Captain William Bay for the steamer Ruth 2 (capacity 300 people) to make trips from the Wheeling Wharf to Coney Island every 2 hours from 11 AM to 11 PM, when park closed. This daylong access allowed Vaudeville matinees in addition to evening performances. Steamer rides cost 5 cents. The park itself charged no entry fee.

An ad that ran in both the News-Register and Intelligencer promised that patron could, “Take Wheeling Traction and Panhandle Traction Cars Direct to the Island…” The trolleys ran from the “Jonathon’s Ravine to the Coney Island station.” In her research, Kate Quinn found evidence of a pontoon bridge composed of barges, as well as plans for a more permanent bridge. Indeed, the original architect’s rendering that appeared in the January 2, 1905 News-Register, includes shows what appears to be a permanent pedestrian bridge from the West Virginia side.

On opening day the Ruth had to turn away people as 6,000 turned up to visit Coney Island. The Panhandle Traction Co. put on extra cars to accommodate the crowds.

The park was managed by Wheeling man Harry W. Rogers, himself a performer – an illusionist who had “mastered the mysteries of legerdemain.”

According to the News-Register, more than 10,000 people crowded the island park for the July 4 celebration of 1905 to see the Edgerton aerialists’ “daring and thrilling” trapeze performance, and most stayed after dark to witness an elaborate fireworks display costing $1500 (40,000 in 2015 dollars).

Later in July, the Knights of Pythias organized an excursion, as did the Flint Glassworkers Union, and members of the State Undertaker’s Association. And on July 19th, the Salvation Army sponsored an outing for 400 or so of the “poor children of the city.”

The park continued operations in the summer of 1906, when one of the best-attended shows on Coney Island was the Herald Square Opera Company who performed several different comic operas. Advertising for the performance consisted of a slogan on all the streetcars which proclaimed “Not Yet But Soon.” A banner hung from the Schmulbach Building on Market Street.

The Ohio River flood of March 1907 did considerable damage to the park. Two of the buildings overturned and the theater was swept away. Even though the main buildings were anchored with heavy iron many were destroyed. They were rebuilt and the park was scheduled to re-open July of 1907, but the damage was more extensive than first thought and the work crew was unable to keep to the schedule. Large piles of drift were seen everywhere and the water mark for the flood depth was high on the tower. It was soon announced that the park would not open until 1908. Adding to the misery was the sale of the popular steamer Avalon (named after the mythical island of paradise from Arthurian legend), which had replaced the Ruth, taking thousands to the island.

But the promised resurrection was not to be. Wheeling’s Coney Island was abandoned in 1913 after the last building was carried away by yet another flood.

The Lower Sisters Island still exists, though as a mere shadow of her early twentieth century self. Boaters who explore her eroding shores have reported finding roller skates and other decaying artifacts of a long extinct amusement park. The construction of the Pike Island Locks and Dam in the 1960s raised the water level sufficiently to submerge much of the island and all but obliterate her smaller, Upper Twin.

Meanwhile, the search continues for photographs of Coney Island that must surely have been taken during her summery twinkling of existence. They must exist, somewhere, perhaps pasted in an album and stuffed in an old steamer trunk long forgotten in an old attic – yellowed and curled with age, black and white testaments to the joy provided by Wheeling’s Progressive Era amusement oddity – the ill-conceived, fatally flawed but beautifully whimsical work of performance art, our own Avalon on La Belle Riviere.

Do You Know About Wheeling's Coney Island?

Watch Kate Quinn's talk on the mysterious and short-lived Coney Island Amusement Park that once existed on the Lower Sisters Island near Warwood. 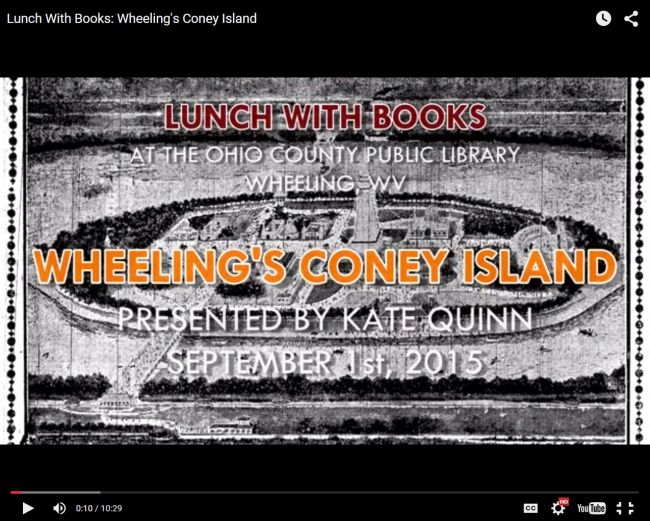