Humphery, then a U.S. Senator (D-MN) and the democratic presidential candidate, visited Wheeling May 5, 1960. At Wheeling College, Humphrey spoke to a standing-room-only crowd at Swint Hall, but in downtown Wheeling Humphrey spoke to a crowd at the Federal Court House and Post Office on 12th Street while crowds craned their necks waiting for Robert Kennedy, brother of then presidential candidate and Humphrey opponent John F. Kennedy, to make an appearance at the McLure Hotel where he was speaking at a luncheon meeting of the Ohio Valley Advertising Club's Retail and Industrial Conference

Though Humphrey, as Vice President of the United States under President Lyndon B. Johnson, became the 1968 Democratic Party nominee for President (losing to Richard Nixon, who visited Wheeling in 1956 where he was officially named Dwight D. Eisenhower's running mate following the "Checkers" speech), Humphrey would not return to Wheeling until 1971, speaking at the annual COPE dinner (see link to speech below). 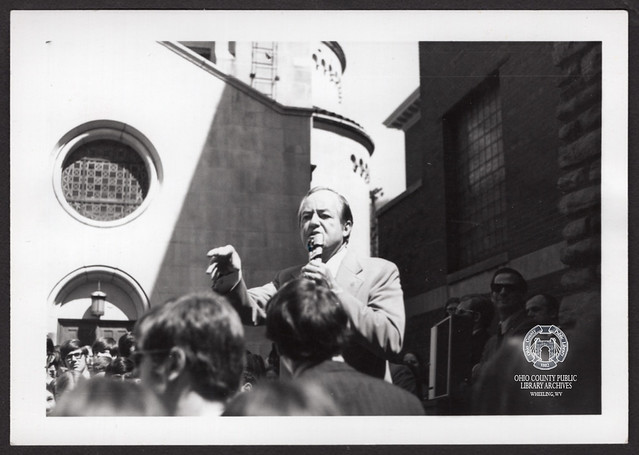