Dedication of the Soldiers and Sailors Monument, 1883

Dropping from the Hands of the Living to Honor the Graves and Memory of the Dead Brave.

The Principal Event of the Day — The Procession.

The interest of the day centered in the dedication of Soldiers' monument, which was made the feature of the afternoon. Toward noon the crowd grew rapidly in proportions and pushed toward the centre of the city, while many an anxious eye was cast heavenward, where the sullen clouds gave indications of soon discharging themselves below. The centre of attraction at this time was the custom house corner and thence up Market street, where the procession was being formed. G. A. R. Hall was a busy place. Marshals and aids were dashing hither and thither, issuing orders, stationing men and arranging the lines. The Posts from over the river arrived promptly on time were assigned places, and about 2 o'clock, the procession moved up Market street. It was not particularly imposing, but when the weather is taken into consideration, it made a fine display. It was composed as follows:

The fire department made the best show. The engines shone like mirrors and the hose was scrubbed to a snowy whiteness. The G. A. R. Posts marched with soldier-like decorum and regularity, and the societies made a brave show. The drum corps beat with martial fervor and the band played stirring airs. The route of procession was as already published and ended at the Monument on Capitol Square.

SCENES AT THE SQUARE.

The Immense Throng — Decorations of the Monument and Platform.

Long before the hour fixed for the ceremonies of acceptance and dedication of the monument, the crowd began surging toward Capitol Square. On every street, in squads and clusters, the people moved toward this common centre, on foot and in carriages, until fully twenty thousand stood facing the monument. The square was a solid mass of humanity on the south and west sides, packed in close in edgewise. The street was blocked up with vehicles and the sidewalks opposite were jammed to suffocation. The chorus of school children was wedged close up to the monument and the singing societies had to fairly fight their way through to get up to the platform. An inclosure should have been made, or guard stationed to keep a space reserved, but nothing of the kind had been done.

Every window, parapet and balcony of the Capitol was crowded, and the windows and roofs of surrounding houses had been brought into requisition to obtain a good view of the scene below. In short, such a jam was never before seen in Wheeling on any special occasion.

had been erected at the west side of the monument, level with the top of the base and arranged so as to face north. It had accommodation for some half hundred people and was railed in. The decorations upon it were profuse and in good taste. The battle flags of the State, many of them torn to ribbons by shot and shell, were ranged around the railing, crossed and filled in with small flags. A flag staff arose from the north side, floating a banner, which was lowered when the ceremonies began. Above the platform

a thing of beauty. Taste had directed its decoration and flowers and evergreen supplied the material. The dark pine festoons were caught up and relieved by bright boquets, making a fine effect. Wreaths were tastefully hung and chains gracefully swung about and around the figures. As a whole, the monument was dressed with perfect taste and skill.

The Beautiful and Striking Features of the Event.

The procession came down Chapline street and slowly fought its way through the immense jam. At this time the clouds gave promise of early rain and many an anxious glance was sent skyward, but the moisture held off. The officers and speakers, with those of Holliday Post who participated in the ceremony, clambered to the platform and after a little delay the ceremonies began. The band struck up the National anthem, "My Country 'tis of Thee," and the school children, under command of Gen. Beach, chimed in. They should have had a platform, as their voices were almost inaudible twenty-five feet back.

Rev. J. E. Smith offered the invocation, which was an eloquent prayer to the Almighty, thanking him for the many blessings we enjoy and craving Divine grace for the future.

"Chapel," by Kreuzer, was then sung by three singing societies, Arion, Beethoven and Germania, with the band. It was grand, stirring song, and exceedingly well rendered. Next came

Dr. Logan's Address on Behalf of Citizens of Trustees.

Dr. Thos. H. Logan, of the Board of Trustees, in whose charge the fund had reposed, was very appropriately chosen to make the presentation. In a loud, clear voice he said:

Members of the Grand Army of the Republic:

At this season nineteen years ago, and on the ground upon which we now stand, patriotic citizens were engaged in making preparation for holding a great sanitary fair, the object of which was to provide funds for the supply of sanitary relief to soldiers in hospitals and elsewhere. A few weeks later that fair was held, and liberally patronized by the people of the surrounding country. The largest portion of the funds derived therefrom was expended for the welfare and comfort of soldiers in hospital and field, and in caring for their families, when necessary, at home.

After the close of the war there remained an unexpended sum of about $4,000. The was increased by investment in Government bonds and otherwise, from time to time, until more than doubled.

Meanwhile, the use to be made of this fund had been frequently discussed. It was finally decided to appropriate it to the erection of a monument, which should stand as a memorial, in honor of those who had served their country in its hours of peril.

In deciding upon the design of the monument, the committee consulted freely with representative men of your Association.

As a work of Art, both in design and execution, it seems to have merited and received the highest commendation. The sailor looks a real sailor and soldier a true soldier.

The crowning statue representing union, holds in one hand the shield for defense; and in the other the sword to be used when necessary to vindicate the honor of the nation. There is, however, no menace in either attitude or expression. The face is full of majesty, stern, but not unkind; and it gazes hopefully unto the far reaching West and widening South and North, it seems to say to the gathering millions, make war no more, least of all among yourselves; but strive that the fruits of industry and peace may abound and multiply without interruption, for evermore.

Commander: It is eminently fitting that this monument should be dedicated by the surviving comrades of those in whose memory chiefly it was erected. For this purpose it is now at your disposal.

When Dr. Logan concluded, G. B. Jones, Commander of the Post, accepted the monument in a short but eloquent address, on behalf of the soldiers and sailors. "The monument," he said, "was silent, but that silence was impressive and eloquent. It was itself an oration and showed the brave dead to be unforgotten. Officer of the Day, direct the Officer of the Guard to station a guard of honor about the monument."

A guard of four men was then placed, one at each corner of the monument. The flag was hoisted and the stirring strains of "The Star Spangled Banner" broke upon the air, sung by the German societies. The Officer of the Day was Jas. Sheridan; of the Guard George Rodebaugh; Guard of Honor, Comrades Little, Robinson, Greer and Pierson.

The Post Commander demanded what portion of Scripture was applicable to the navy. Senior Vice Commander Burtt responded by reading that portion of the 107th Psalm, beginning: "They that go down to the sea in ships."

The symbol of the navy, an anchor, was then placed on the north side of the monument and a sailor, in full costume, with drawn cutlass, was set on guard. At the same time the strains of "Columbia the gem of the ocean,"soared up from the chorus and band.

"What portion of Scripture applies to the army?" demanded the Post Commander.

The Junior Vice Commander responded by reading the portion of Scripture beginning: "To your tents, O Israel!"

The symbol of the army, a musket and full accoutrements, was set up on the south side of the monument and a solider in uniform placed on guard. The inspiring "Marching through Georgia" was then sung with great will and enthusiasm.

by a prayer by Chaplain Robertson. The Post Commander, in a loud voice, in the name of the Grand Army of the Republic dedicated the monument to the dead soldiers and sailors. At the command "Salute the dead!" every head was bared and reverently bowed. 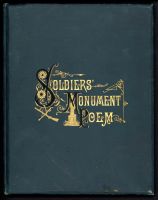 This ended the dedication ceremonies conducted in the beautiful form prescribed by the G. A. R. Mr. Geo. F. Irvine, chairman, then took charge and introduced Mr. Wm. Leighton, Jr., who, with great feeling and taste delivered the following poem. It is a beautiful composition, doing honor to his heart and credit to his head. [ . . . ]

▶ Read about the effort to relocate the monument from Wheeling Park.