-From "Report of the Health Department of City of Wheeling, West Virginia, for the two years ending June 30, 1913."

Until June, 1910, garbage was collected by the contract system. No attempt was made to collect from every part of the city, the wagons were filthy and the lack of system gave general dissatisfaction. For three years the Health Department has had charge of collection and disposal, including "hiring and firing."

The equipment includes an incinerator, a modern barn, nine wagons of the Holzbog type and sixteen horses. 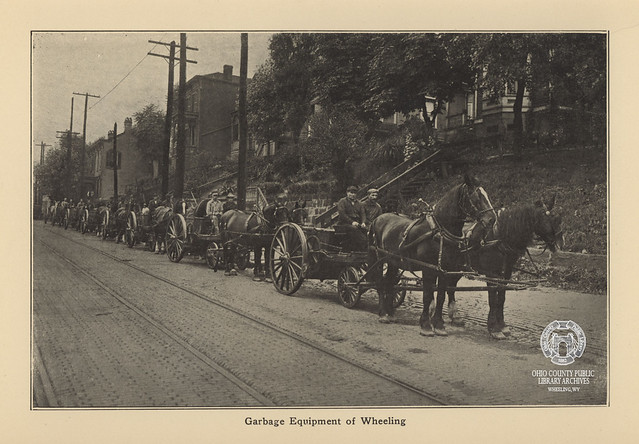 Extra horses are hired in August and September, when nine wagons are used with two collectors for each wagon.

Collections are made daily from hotels and restaurants, weekly and semi-weekly from residences according to the season.

Each wagon is weighed at the incinerator after all excess water is drained off. This is done because all the garbage is not paper wrapped and with the idea of saving fuel. All wagons are steamed and washed daily at the incinerator.

The location of the incinerator upon a hill at one end of the city, materially increases the cost of collection. Much of the garbage is hauled three miles after the load is collected and last of the haul is up a ten per cent grade. Included in the cost of incineration, in addition to repairs, were alterations and replacements, which with the cost of maintaining the sewer, amounted to approximately two thousand dollars each year. Much of this increased expense is also due to the site of the incinerator.

Wheeling's garbage collection is not perfect but the service is vastly improved. Leaking wagons and drunken drivers are not tolerated, and it has been demonstrated that paper-wrapped garbage will neither smell badly in summer, nor freeze and stick to the can in cold weather. The wagons, men and horses are clean when they leave the barn, and any odor about our garbage equipment is due to improperly kept garbage. If every one observed the rules there would be absolutely nothing unpleasant about the work.